It’s been more than 50 years since Ian Oulton (BA’66) laced up his skates as a Tiger, but his support as a volunteer and donor for Dalhousie athletics and recreation programs has been unwavering ever since.

Now, thanks to a generous financial gift from Oulton and his wife, Dr. Margaret Oulton (PhD’75), construction on the much-anticipated Dalhousie Event Centre can begin.

The Dalhousie Event Centre will feature an NHL-sized rink with an alternate floor surface allowing for Dal and community events. The Dalhousie Physiotherapy Clinic will move into its new, state-of-the-art home on the Event Centre’s second floor. Varsity, club, and intramural teams, which were relocated to the Halifax Forum when the old arena was torn down in 2012, will return to campus, offering easier access for many students. Beloved community activities like public skating and Dal Tiger hockey camps will also make a comeback.

“I believe very strongly that Dal should have a rink on campus, and this will be a great facility for the entire community,” says Oulton, who saw an opportunity to make a gift that would move the project from the planning stages to getting shovels in the ground when the current Dalhousie administration and the Department of Athletics & Recreation made the Event Centre a top priority. “I'm excited that this is getting underway — it’s been a long time.”

Oulton has remained close friends with his varsity hockey and football teammate Dr. William (Bill) Stanish (MD’70), who is the lead fundraising volunteer for the Event Centre campaign. The two have been meeting almost daily to walk and chat, often about the Event Centre.  As an early lead donor to the campaign, Oulton says it feels like they are still teammates, just working towards a different goal.

“Most of my friends are still from my university days — athletics was a great way to get to know people and to develop those close friendships,” says Oulton. “With athletics you learn how to win and lose and get along. The ability to communicate and work with people is by far the most important aspect of my business. I attribute that to athletics.

“My university days were very formative years. I’ve always felt gratitude toward Dal for giving me an education in the broadest sense.” 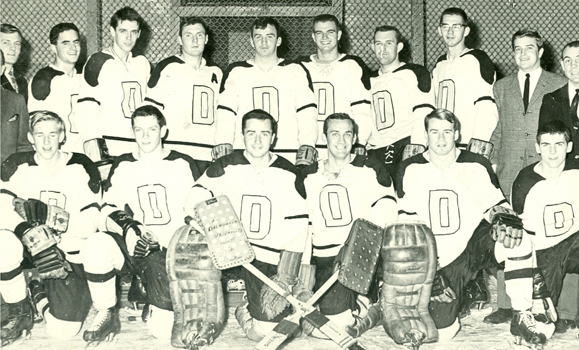 A place to call home

Katie Cameron, a second-year psychology major from Riverview, N.B., plays defence on the Dal varsity women’s hockey team. With construction set to begin this summer once site preparation work is complete, Cameron and her teammates are looking forward to the opportunities the Dal Event Centre will bring, like hosting national championships and encouraging participation. “I’m super excited this is happening—this new facility is going accelerate our program a lot,” she says.

“Being able to walk from class or Dalplex to the rink within five minutes is going to make a huge difference,” says Cameron. “The new facility will also be really accessible for students on campus, so we’ll see more fans able to go to games and other activities.”

Cameron adds that where a team practises is where they spend most of their time, so being on campus will make them feel more connected to Dal. “Having the Event Centre on campus is just going to make it feel so much more like a home and really feel like it's ‘ours.’”

Oulton fondly remembers the countless hours he spent in the old arena as a player and later as a Tigers supporter in the stands.

“We had all sorts of characters at the rink in those days — it was a great environment,” he recalls. “When you turned off University Avenue onto LeMarchant and South and you saw the Dal rink — with the football field and then Shirreff Hall—for me, that was where Dal began.”

Now with the Oultons’ support, varsity athletes, Dal students, faculty and staff, and the Halifax community will be able to make the Dalhousie Event Centre their home for years to come.

You can give to the Dalhousie Event Centre here or contact Victoria Hamilton, Director of Development, 902.497.6825 or victoria.hamilton@dal.ca.