As Star Wars fans of all ages filed into Ondaatje Hall on Dal campus last Monday evening, they did so under the watchful gaze of Stormtroopers, bounty hunters and members of the 501st Legion Atlantic Garrison (a local group of superfans).

There, at the front of the chatter-filled auditorium with an X Wing fighter helmet propped on the table before them, sat Jack Mitchell and Luke Togni, ready to take attendees to a “galaxy far, far away” through an introduction to Dr. Mitchell’s new book, The Odyssey of Star Wars: An Epic Poem.

“So, there’s a slice,” Dr. Mitchell said, opening the evening with a recitation from his book, almost entirely by memory. This must equate to “mic drop” for Classicists because the crowd clamored with enthusiastic applause.

Drs. Mitchell and Togni are both Classics scholars; Dr. Togni earned an MA from Dalhousie Classics in 2011, but it was it was a Star Wars Facebook group that brought the two together again shortly after Dr. Togni returned to Halifax in 2020. Between talking Star Wars and ancient philosophy, the two clicked instantly and now regularly play Star Wars tabletop games together. Their chemistry was obvious as the two chatted back and forth, drawing fans into Dr. Mitchell’s classical version of the Star Wars story. 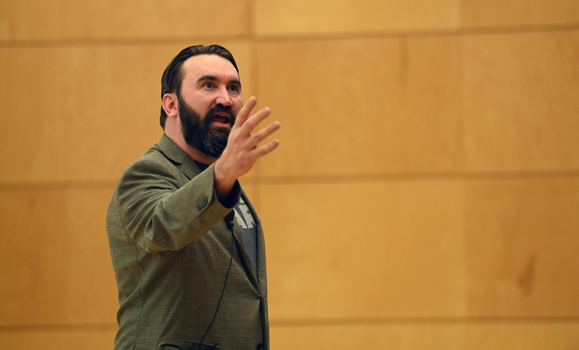 Jack Mitchell recites a passage from his poem.

You call yourself a superfan?

During the evening, Dr. Mitchell answered questions from Dr. Togni and the audience. Topics included potential parallels between Star Wars characters and classical characters, whether Ewoks were tough to adapt to epic poetry, and how the Muse as a guiding spirit of ancient poetry made her way into Dr. Mitchell’s book.

One of the highlights of the evening was the Star Wars trivia contest. To qualify for the match, attendees had to be first to answer questions like, “Which character says the iconic line, ‘These aren’t the droids you’re looking for?’” (Answer: It’s Obi-Wan Kenobi) and “In The Empire Strikes Back, what planet does Cloud City orbit?” (Answer: It’s Bespin).

Questions became tougher as the rounds advanced, with Dr. Togni going so far as to exclaim, “Hold onto your butts for question seven!” The question delivered on his warning, stumping a few by asking, “What type of crystal powers the Jedi light saber?” (Answer: It’s kyber crystal). 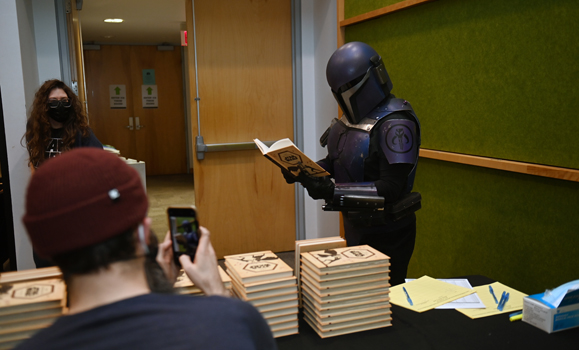 An attendee in costume reads a passage from Dr. Mitchell's book.

The Odyssey of Star Wars: An Epic Poem is written for everyone, and transports readers into futuristic Tatooine and surrounding planets with a strong connection to ancient Greece.

“I wanted to make it readable for someone who had never even seen Star Wars before — like my mother-in-law,” said Dr. Mitchell.

The evening concluded with a door prize and a costume contest. The best costume award went to 10-year-old Eli Arsenault for his witty representation of a Star Wars sleepover. With a backpack full of Star Wars stuffies and a satisfied smile, Eli took his prize (a signed copy of the poem) to comments of, “Aw, cute!” and “What a great idea!” 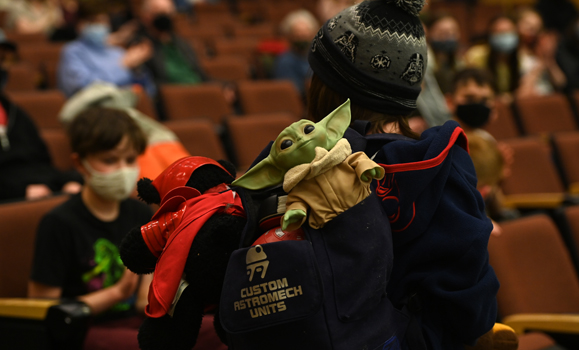 Dr. Mitchell closed the evening with a final reading, again reciting his verses with little help from the book. His book is available for purchase from King’s Co-op Bookstore, Indigo, and Amazing Stories Comics. 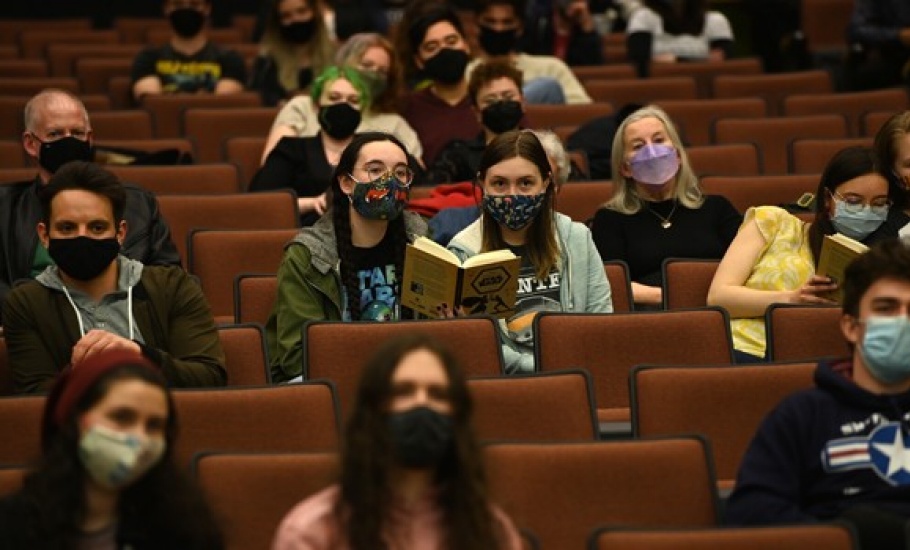 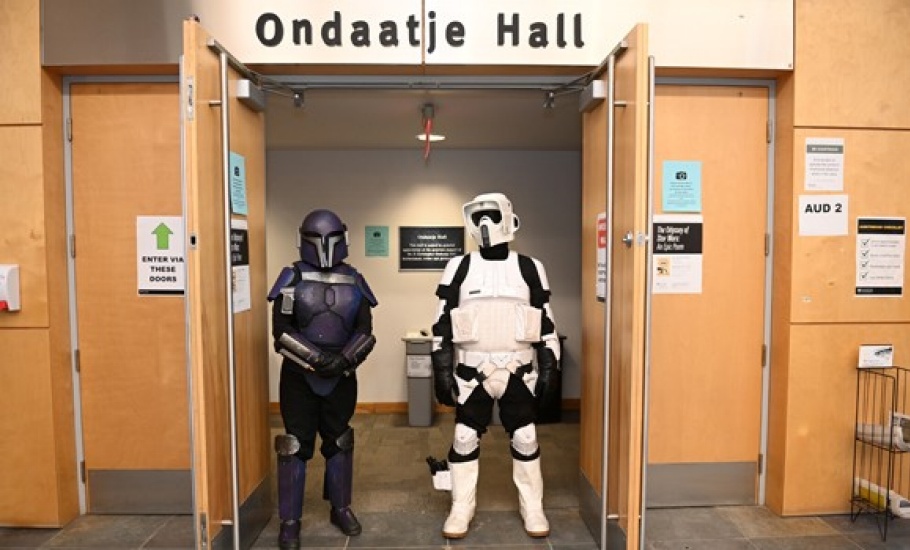 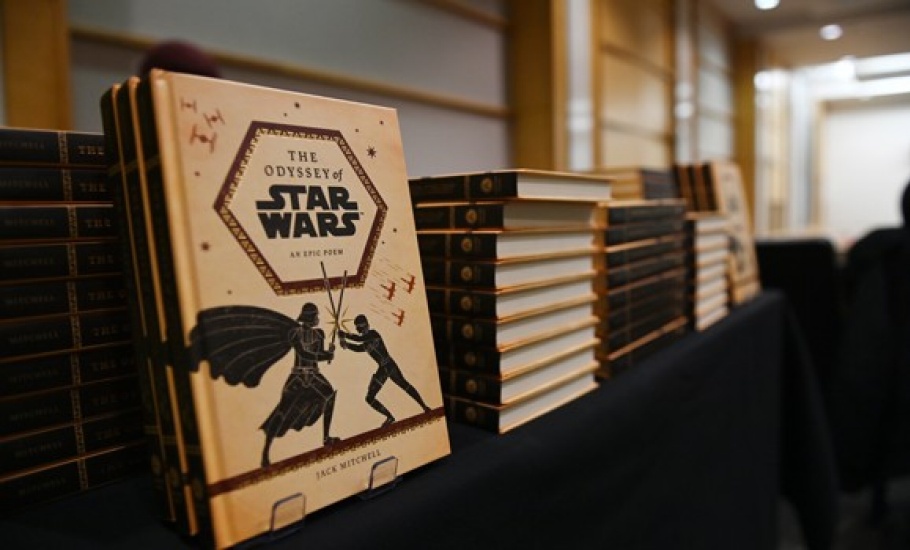 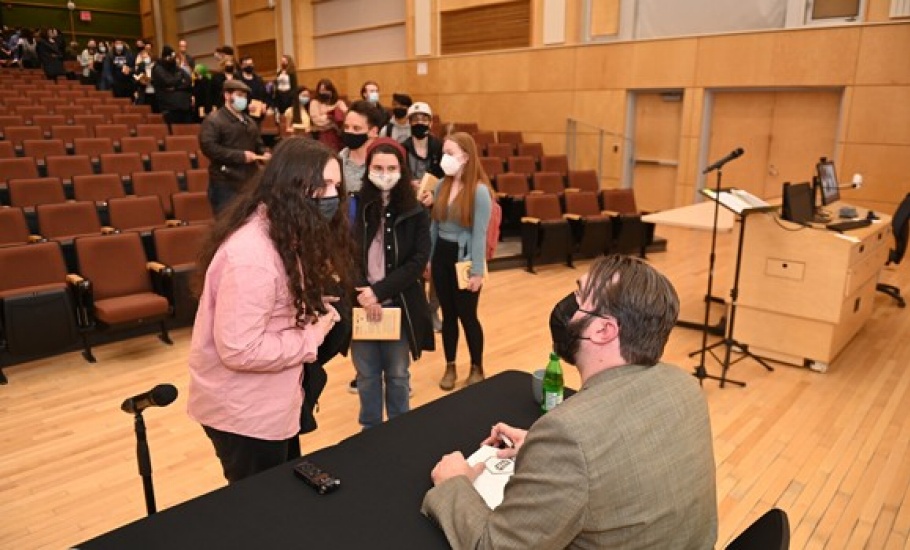 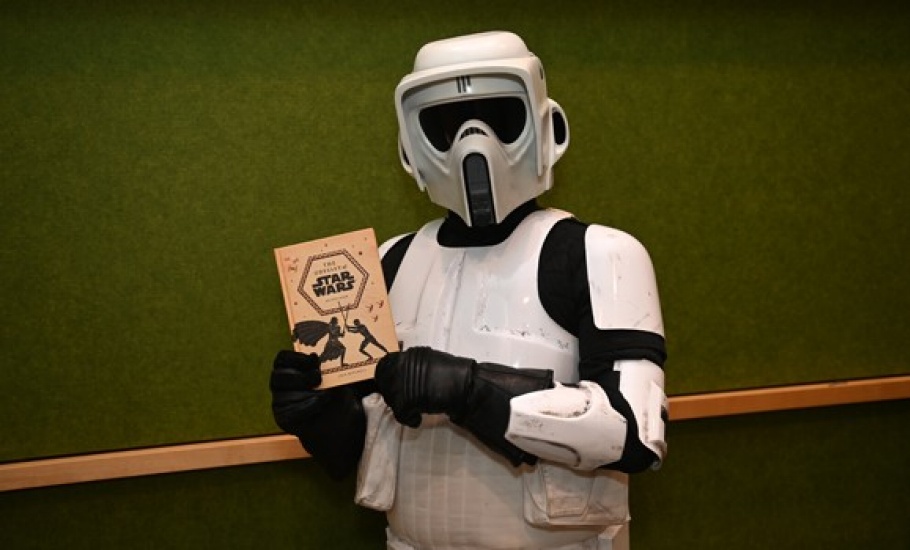 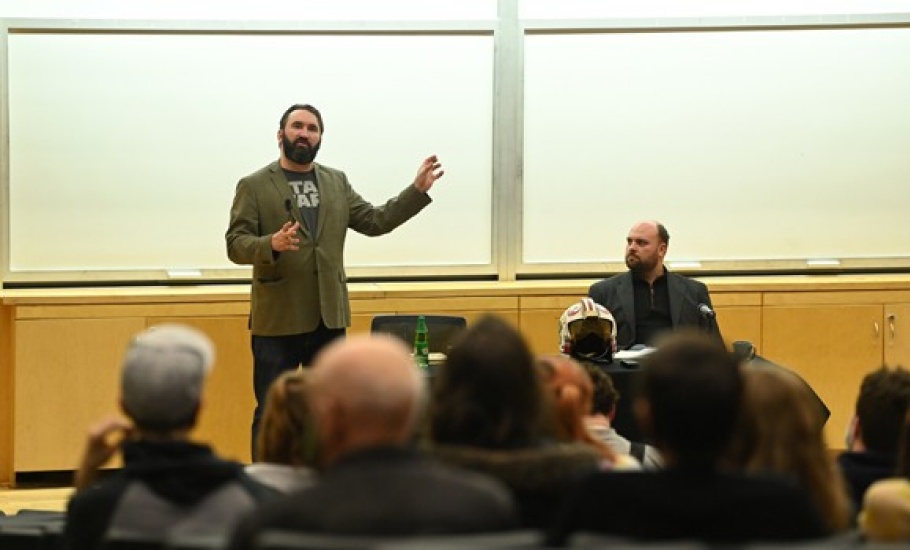 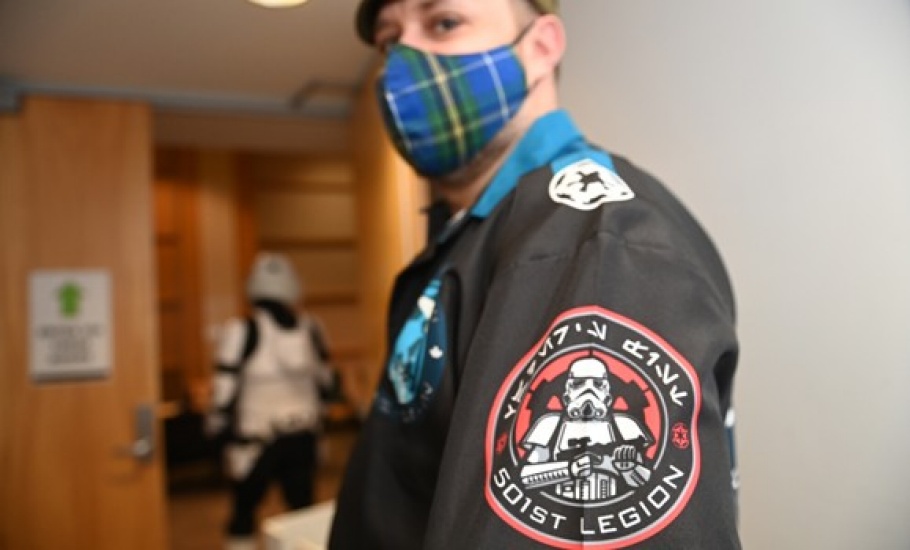 A member of the 501st Atlantic Region Garrison. 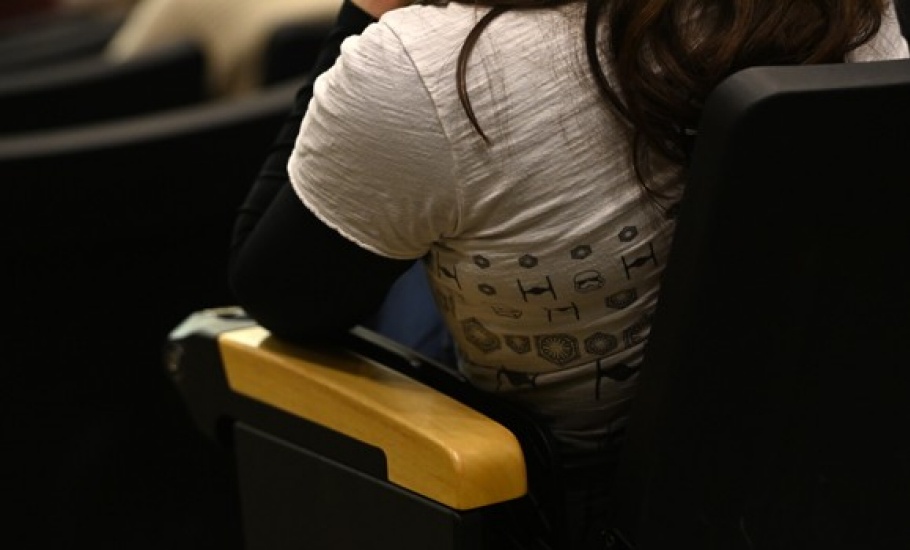 A more restrained form of fandom. 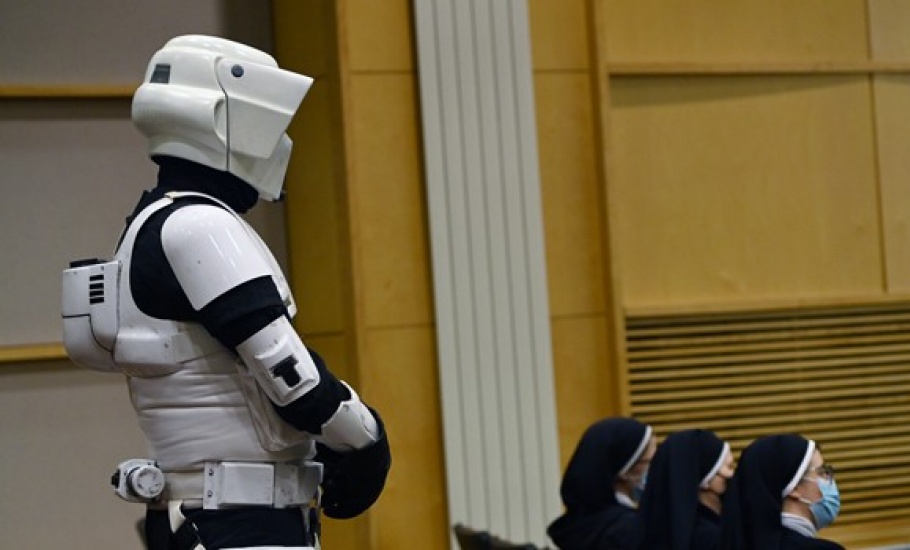 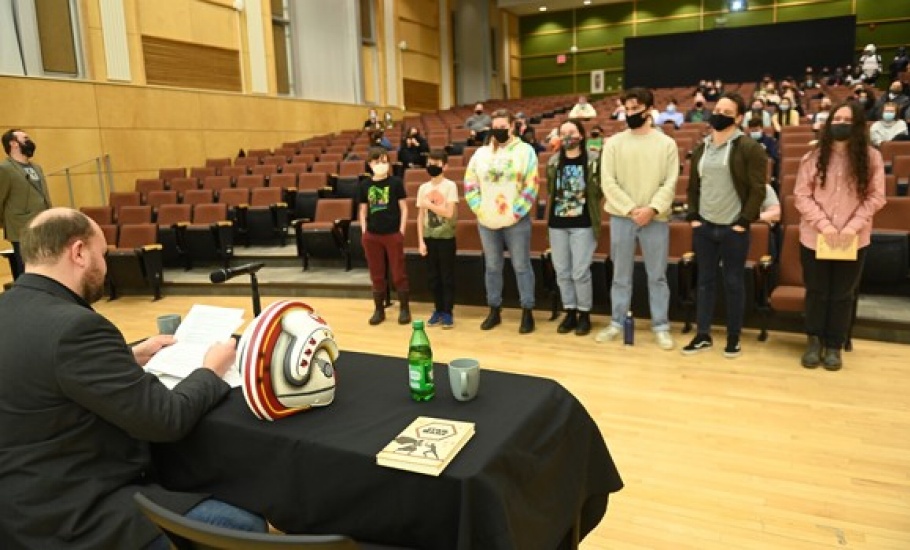 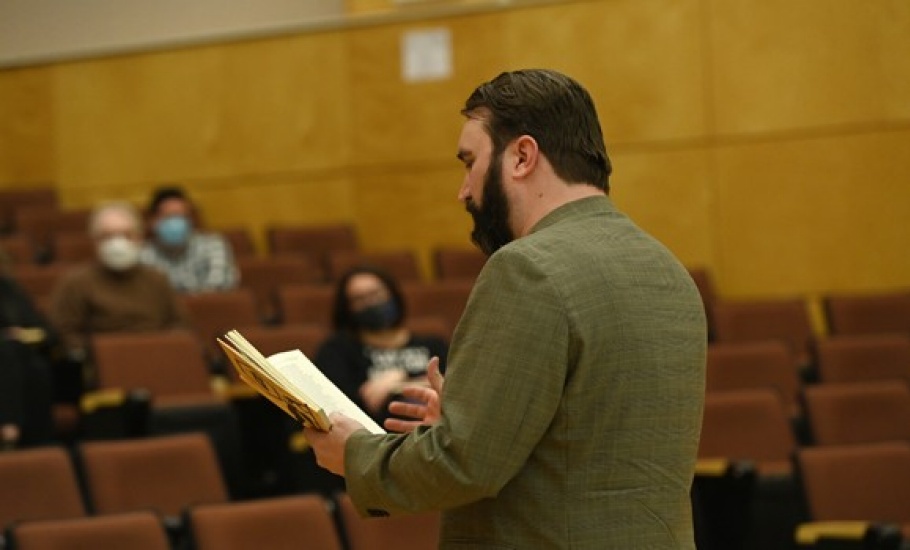 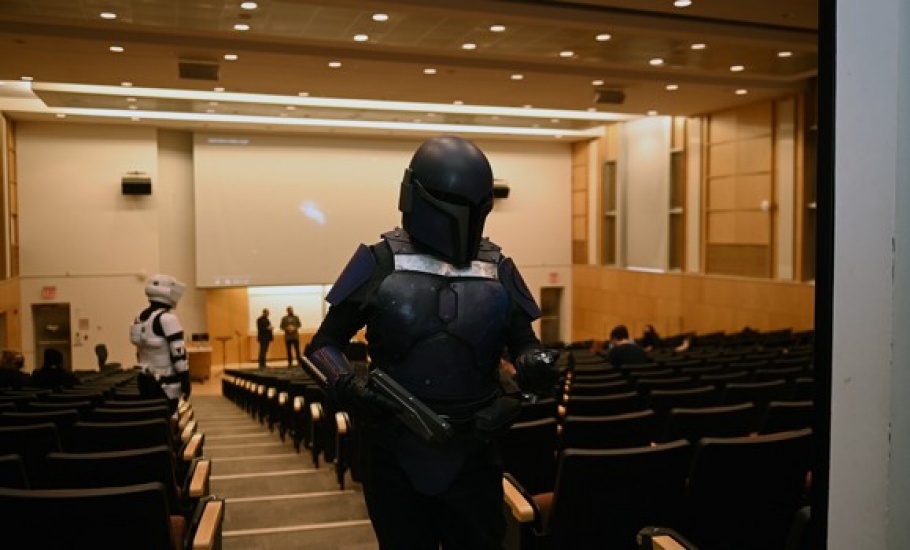