Dalhousie University is a signatory on a landmark national agreement focused on addressing anti-Black racism and promoting Black inclusion in higher education.

On Thursday (November 18), Dalhousie joined over 40 universities and colleges from across Canada in officially signing the Scarborough Charter.

The charter, which evolved out of a year-long collaboration between postsecondary institutions, identifies key barriers to Black inclusion and approaches to identifying and responding to them. It also contains concrete actions and accountability mechanisms for institutions to deliver on their promise to make structural and systemic change. 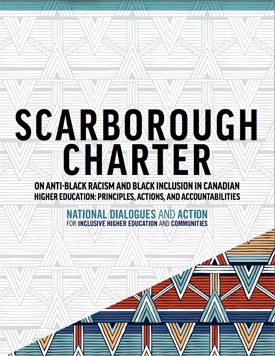 “Here at Dalhousie, we pride ourselves in having a strong commitment to address inequity in our region, across the country and around the world,” said Dal President Deep Saini in a video statement as part of the virtual national launch and signing ceremony.

“We know that universities play a critical role in fostering inclusive excellence. Dalhousie has been making strong progress in this area but there is still more that we can do. We look forward to taking further steps through the implementation of the charter’s principles, and our own strategic plan, to continue to create more diverse and inclusive communities on our campuses and beyond.”

From talk to action

The charter’s origins stretch back to October with the first National Dialogues and Action for Inclusive Higher Education and Communities. That virtual cross-Canada event, which followed the rising tide of concern and action around anti-Black racism across North America in the summer of 2020, involved more than 50 individuals from the Dal community taking part including Vice-Provost of Equity and Inclusion Theresa Rajack-Talley.

“We did not want this to be just another talk show — the organizing committee believed that this work needed to become something more strategic and formal,” says Dr. Rajack-Talley, who served on the charter’s inter-institutional advisory committee and took part in a panel discussion during the launch event Thursday alongside colleagues from the University of Calgary, Centennial College and University of Toronto Scarborough Campus.

Barb Hamilton-Hinch, assistant vice-provost of equity and inclusion, was also featured during the launch event as part of a montage of speakers from across Canada.

The charter is founded in four principles — “Black Flourishing,” “Inclusive Excellence,” “Mutuality” and “Accountability” — and covers 16 areas of action on an institutional level alongside several cross-sector inter-institutional commitments and accountabilities.

“Outside of universities like Dalhousie and King’s that have investigated their history and legacy when it comes to slavery and anti-Black racism, there’s no document that explicitly outlines their relationships and commitments to anti-Black racism and Black inclusion in higher education in Canada,” says Dr. Rajack-Talley. “This is the first that outlines the issues, actions and philosophical understanding behind these issues, backed by the commitment and accountability of those universities and colleges that have signed on.”

Video: Map of the Scarborough Charter

As for what signing the charter will mean for Dalhousie, Dr. Rajack-Talley says it’s about affirming and providing further guidance and accountability for work already underway, for old recommendations and new commitments outlined in Dal’s strategic plan, Third Century Promise, for Black communities inclusive of African Nova Scotians.

She considers Dalhousie a leader in this movement towards Black inclusion, but that the university can’t rest on its laurels.

“This is a human-rights issue, and one that asks all of us here at Dal to take on the responsibility for change,” she says. “When we fall short in Black inclusion, we are not only denying people’s humanity, but we are missing out on their incredible contributions.  There is diversity in excellence and excellence in diversity. By creating and signing this charter, universities and colleges, like Dalhousie are taking a leadership role in the transformation of our institutions so that we can be educational, innovative and civic.”

The full charter can be read at the University of Toronto website.