From STEM students to alumni changemakers

Jack deGooyer (BEng’21) is one of them. Now a Master’s of Applied Science student at the University of Waterloo, deGooyer is one of 28 Schulich Leaders Dalhousie has welcomed since the scholarship program started a decade ago.

While at Dal, deGooyer gained experience working in Jeff Dahn’s battery research lab and he completed a co-op term at Tesla’s lab in Halifax. Now, his innovative graduate work focuses on using quantum photonic nanowires as super-sensitive photodetectors designed to biomedically image (and hopefully diagnose) degenerative eye diseases. Having the Schulich Leader Scholarship, deGooyer says, gave him the confidence to take risks in the field: “I might as well swing for the fences,” he says.

Schulich Leaders are nominated to apply by their high schools, who look not only at academics but also entrepreneurial leadership, charisma and creativity, with strong consideration given for financial need.

When Dal Schulich Leader alumna Kate Arpin (BSc’21) was in grade 12, she helped lead a new water quality study in her hometown of Uxbridge, Ont. It looked at the concentrations of chemicals in water fleas, considered an indicator species.

Now a grad student at the University of British Columbia, Arpin says the value of the program can’t just be measured in dollars. “There’s a ripple effect as well,” she says. “By being able to focus on my studies, I did better than I would have if I had to work part-time, and by taking on really cool research opportunities, I gained experience that allowed me to get scholarships for my masters.”

Arpin added that the program does “an absolutely amazing” job of providing networking opportunities and mentorship.

Helping others is part of the ethos that drives MacLean and other young leaders in highly competitive fields. “I think my ultimate goal is always to leave somewhere better than when I came. I find most struggles I've encountered are worth the pain, as long as the next person struggles less,” MacLean says.

MacLean’s leadership work today includes co-chairing Engineers Nova Scotia’s Youth Engagement Committee, plus she’s employed as a data analyst with the federal government. MacLean graduated from a Eash Hants Rural High School in Nova Scotia and says being a Schulich Leader comes with the freedom to be imperfect. She knew that if she did stumble it wasn’t the end of the world — and that knowledge was life changing. “You don't have to be perfect 100 per cent of the time to be worthy of this award. [That] was really, really valuable to me.”

Lifelong connections and support — as students and alumni

The Schulich Leaders form a cohort during their time as Dal students and enjoy on-campus meet-ups and enrichment experiences. Recently, the incoming class of Schulich Leaders had a breakfast-learning session with Dalhousie’s Alice Aiken, vice-president, research and innovation. Dr. Aiken spoke with them about what it means to be a leader and after spending a few hours with them, said, “It was such an honour to meet these future leaders.” 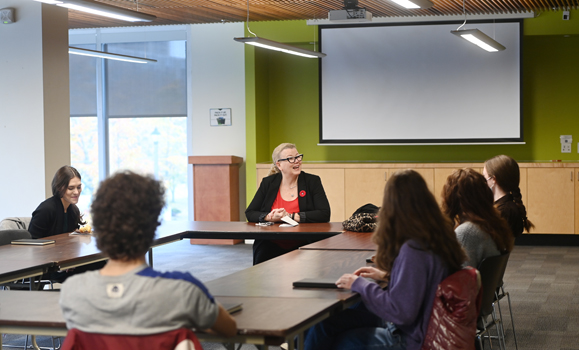 As alumni, they stay part of the Schulich Leaders network with continued opportunities for support, learning and development.

On the tenth anniversary of the program, President Deep Saini says he’s proud that Dalhousie has attracted 28 Schulich Leaders thus far. “What is noteworthy is that many Schulich Leaders are still studying or launching their careers. Their work will shape our future,” he says.

“Thank you to Seymour Schulich and the Schulich Foundation for your generosity and support of these exceptional Dalhousie innovators,” says Dr. Saini.