Lost and found: The story of a missing grey seal camera

A grey seal equipped with a camera rests on a Sable Island beach. (Damian Lidgard photos)

A rare piece of research equipment was recovered on the Scotian Shelf after it spent three years lost at sea, and its contents could contain valuable information about the behaviour of grey seals on Sable Island.

On the Banquereau Bank, an area 400 kilometres east of Nova Scotia, two fishermen discovered an unusual looking item among their catch of surf clams. Inside their net was a small, black object attached to a circular piece of mesh 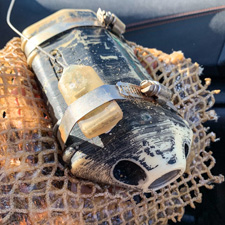 netting with a short wire extending from the body. With help from Fisheries and Oceans Canada (DFO), the item was later identified as a small digital camera (shown right). It had been missing since 2017, when a male grey seal from Sable Island journeyed into the Atlantic Ocean with the camera on its back and did not return with it.

The camera had been affixed to the seal as part of an ongoing study on Sable Island seals. The study uses bioprobes— large marine animals equipped with devices for the collection of biological and oceanographic data.

Since 2009, the Dalhousie-based Ocean Tracking Network (OTN) has been tagging and tracking grey seals on the island to document their movements and interactions with other marine species. In addition to tracking tags, grey seals are equipped with devices that measure water temperature and other oceanographic conditions.

It wasn’t until October of 2015 that cameras started being used to collect footage on the foraging behaviour of seals. A total of eight seals—seven females and one male—have been outfitted with cameras since the beginning of this project. In order to maximize battery life, the cameras are programmed to begin recording under optimal feeding conditions: at night and at least 25 metres below the surface. 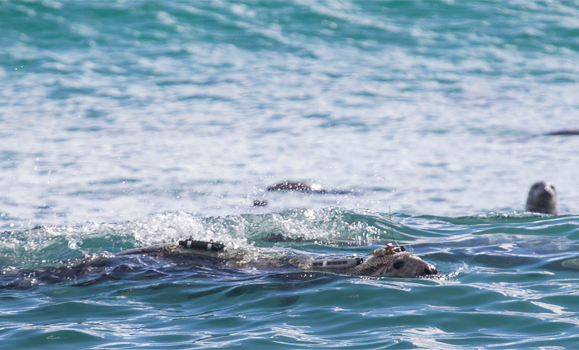 A grey seal, equipped with a camera and tracking equipment, is swimming in the waters off of Sable Island.

Previously deployed seal cameras have provided visual evidence of seals foraging for food on the seabed. Video footage shows seals using their snout and fore flippers to expel small fish, such as common sand lance, from the sand before chasing down their prey. Remarkably, seals appear to be capable of detecting the presence of fish below the sand without actually seeing them, since they often leave patches of sand undisturbed.

The cameras have also provided further evidence to support the grey seal behaviour of resting on the ocean floor. It is common for Sable Island seals to travel up to 100 kilometres in search of food. Rather than wasting time and energy swimming back to shore, grey seals often rest near their foraging location by sinking down to the seabed and surfacing periodically to breathe.

Damian Lidgard, an OTN investigator on this project and a biologist with DFO, says there is significance to this research.

“When the deployments are successful, the data is extremely valuable and also remarkable. Capturing video of a seal foraging or resting on the sea floor many kilometres from land and deep below the surface is, to me, very exciting and tells us a lot about the behaviour, foraging strategies, and interactions of this species.”

Researchers have already learned an important lesson from the lost and found camera. Following its disappearance, OTN researchers decided to only place cameras on pregnant females who previously birthed pups on the island. This change has been beneficial in increasing the probability of a successful camera recovery.

“We now deploy cameras only on females that are pregnant and for which we have long term data on their pupping history on Sable Island. If we deploy the camera in November, we have high confidence that those seals will return in December or January to give birth,” says Lidgard. 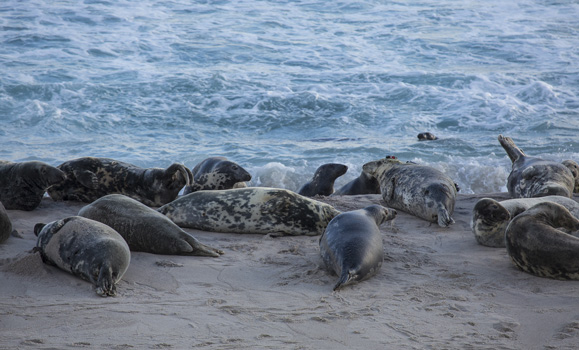 A herd of seals lounge on a Sable Island beach, one of which is equipped with a camera and tracking equipment.

Locating the seal camera provides researchers with a second opportunity at obtaining important scientific data. Once returned to OTN, the camera was shipped to the manufacturer in an attempt to repair it and retrieve the footage. The files stored on the camera have the potential to reveal new information regarding grey seal behaviour, as well as confirm previous findings that were based on non-visual data.

Data obtained from the seal camera research is helping to further scientific understanding of the movements and behaviour of seals. By taking a closer look into the daily life of this species, researchers are able to unlock secrets about grey seals and the marine life they coexist with.