Kevin Hewitt recognized by NSERC with its Science Promotion Award

Kevin Hewitt — a champion of STEM, researcher, and professor in Dal’s Department of Physics & Atmospheric Science — has been awarded a Science Promotion Award from the Natural Sciences and Engineering Research Council of Canada (NSERC).

Dr. Hewitt is being recognized for his work to foster interest in science among students of African descent in Nova Scotia, and his leadership with Dal’s Imhotep's Legacy Academy, an innovative university-community partnership that bridges the achievement gap for students of African heritage in grades six to 12.

“No one ever does anything alone,” says Dr. Hewitt, who also completed his time as chair of the Dalhousie Senate at the end of June. “To build a program like this requires years of dedicated effort of committed individuals working cohesively and often on a volunteer basis. Our community partners, mentors, participants, supporters, faculty, staff and funders all supported a vision of access - painstakingly built over a decade.  In particular, I thank fellow co-founders Wayn Hamilton and Barbara Ann Hamilton-Hinch, and the steadfast financial support provided by Patrick Kakembo.”

“From a small lab in the Physics building to a provincial program – what an amazing journey.  To see participants announcing their intention to pursue a STEM degree in grade 7, then seeing them realizing that dream today bring tears to my eyes.  That has been the most rewarding aspect of this journey.”

NSERC’s Science Promotion Awards honour individuals and groups who make an outstanding contribution to the promotion of Science in Canada through activities encouraging popular interest in science or developing science abilities.

“Congratulations to Dr. Hewitt on receiving the Science Promotion award from the Natural Sciences and Engineering Research Council of Canada,” saysAlice Aiken, Dal’s vice-president research and innovation. “He is truly a changemaker, and has provided incredible support and encouragement to the next generation of leaders in STEM.”

Fostering an interest in science

While completing his Bachelor of Science at the University of Toronto, Dr. Hewitt used to occasionally look at the Nobel Prize in Physics winners’ photos in the hallway, and noticed that there wasn’t anyone there that looked like him. 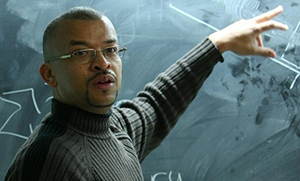 This empowered Dr. Hewitt, who went on establish tutoring programs for students while leading the African Caribbean Students Association. While at graduate school at Simon Fraser University, he co-founded the Association for Students of African Descent and the St. Vincent and the Grenadines Association of Greater Vancouver. He was also the first Black student to win the U of T Scarborough College Physics prize.

During his graduate degree at Simon Fraser University, Dr. Hewitt was able to combine his deep interest in science, African and Caribbean culture, and community outreach by establishing a one-day science program for K-12 students – Imhotep’s Legacy: African Canadians in Science – A Family affair. When he arrived at Dalhousie, he was able to build on the success of this program with Imhotep’s Legacy Academy.

“These appointments and the co-creation of the Canadian Black Scientists Network has provided an opportunity to showcase the success of the Imhotep’s Legacy Academy and where it can be extended, both in reach and scope beyond Nova Scotia’s borders,” says Dr. Hewitt. “All of this work is inspired by my mother Joan Hewitt, who instilled a resilience in her children, steadfast commitment to community, and to always hold fast to basic principles of fairness."

As a researcher, Dr. Hewitt supervises the Hewitt Bionanophotonics Lab that’s overseeing the development of three projects, including an optical diagnostic tool for disease detection that is a novel technology that will allow transplant surgeons to obtain accurate measurements of liver fat content during donor surgeries. The results will be immediate and will guide the transplant surgeon in deciding whether the liver is safe to use for transplantation.

No stranger to accolades, Dr. Hewitt has been recognized provincially for his work with a community service award in British Columbia (1999), and the Discovery Centre Science Champion (2018), and on a national level with the Harry Jerome Award for professional excellence (2014).  He also recently received Dalhousie’s Rosemary Gill Award (2021) for service to students.