Blood of COVID patients could predict severity of illness from virus and lead to targeted treatments, study finds

More than 30 research hospitals in the country were involved in assessing the viral loads in the plasma of three groups of patients with varying degrees of illness. (Prasesh Shiwakoti (Lomash) photo/Unsplash)

An international team of researchers led by Dalhousie immunologists and critical care specialists in Spain has found key biomarkers in the plasma of COVID-19 patients, which will help predict the severity of illness and could lead to new treatments for the virus.

The findings, published Tuesday in the journal Critical Care, involved 250 patients with COVID-19 whose plasma was tested in Spain for the presence of ribonucleic acid or RNA, the virus’s genetic blueprint.

Dr. David Kelvin, a professor and Canada Research Chair at the Dalhousie’s Department of Microbiology and Immunology, collaborated with critical care scientists Dr. Jesus Bermejo-Martin of the Institute of Biomedical Investigation and Dr. Antoni Torres in Spain.

More than 30 research hospitals in the country were involved in assessing the viral loads in the plasma of three groups of patients with varying degrees of illness during the first wave of the pandemic wave in Spain from March 16 to April 15, 2020.

The team found that 78 per cent of patients who were severely ill had higher amounts of viral RNA than those with mild cases. Those who died had the highest concentrations of viral RNA in their plasma, leading the researchers to conclude that the presence of the RNA in a patient’s blood is linked to critical illness. 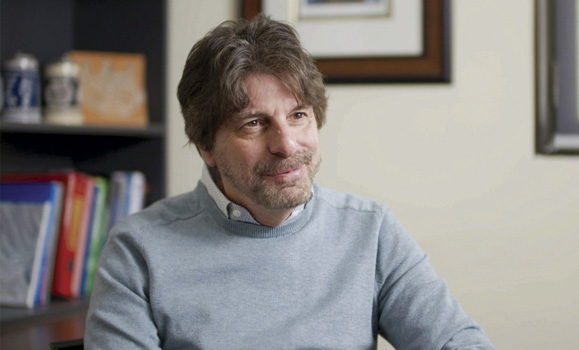 Dr. Kelvin (shown left) says the research could help in quickly identifying patients at crowded hospital emergency rooms who need immediate and intensive care, and those who may be able to go home.

“We now have an extremely reliable indicator for identifying severe COVID-19 patients who require critical care and should be admitted to the ICU, which will help intensive care unit doctors prioritize severely ill patients,” says Dr. Kelvin.

Dr. Kelvin says he and his colleagues are working with a large pharmaceutical company to develop a rapid test that could produce results in 15 minutes and indicate whether a positive patient has the viral RNA and what level of care they may need. Such a device could be a valuable asset as confirmed case counts and hospitalizations continue to surge, particularly in the U.S.

In Canada, Chief Public Health Officer Dr. Theresa Tam said Tuesday that the number of people reporting severe illness was rising steadily. She added that over the last week, “there were an average of 3,020 individuals with COVID-19 being treated in Canadian hospitals, including over 600 in critical care.” Several provinces, including Ontario and Quebec, have seen sharp increases in hospitalizations in recent weeks.

“The importance of this study is that it allows identification of those patients most in need of ICU admission -- all of it done by a simple blood test for presence of viral RNA,” Dr. Kelvin says.

Importantly as well, the team also discovered that the presence of COVID-19 viral RNA was directly linked to a dysfunctional immune response. That may make severe patients unable to fend off the COVID-19 infection, due in part to elevated levels of certain proteins.

The identification of these patients will also help identify those who could be treated with new therapeutics, such as antibody cocktails.

“We are also trying to figure out the why viral components are in the blood and how this leads to immune dysfunction and severe disease. Several clues are now before us and we hope to develop novel therapeutics to aid in treating severe patients,” he said.

The team used a method called droplet digital PCR to quantify the virus’s genomic material in plasma in the 50 outpatients, 100 hospitalized ward patients and 100 who were critically ill in what is believed to be the largest study of its kind using such methodology.