"If 90 percent holds up over time, that would be an excellent result," says Dr. Halperin, a professor in the Division of Infectious Diseases and researcher with Canadian Centre for Vaccinology at Dal. (Photo by RF._.studio from Pexels)

COVID-19 has disrupted daily life across the world and taken the lives of more than a million people, and so it's no surprise that drugmaker Pfizer's news this week that its experimental vaccine is more than 90 percent effective in preventing the virus was met with much jubilance.

“Today is a great day for science and humanity,” Albert Bourla, the company's chairman and chief executive, said in a statement Monday. “We are reaching this critical milestone in our vaccine development program at a time when the world needs it most with infection rates setting new records, hospitals nearing over-capacity and economies struggling to reopen.”

Scott Halperin, a professor in the Division of Infectious Diseases and researcher with the Canadian Centre for Vaccinology at Dal, studies the diagnosis, treatment, and prevention of vaccine-preventable diseases. He explains what comes next in Pfizer's large-scale clinical trial, how significant a 90 percent efficacy rate is, and how vaccines will be distributed.

What are the next stages in this trial and when could we reasonably expect to know if this is truly a game changer? 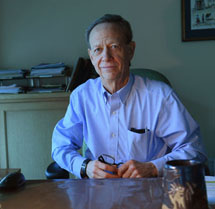 The results they released are from their first interim analysis, which is a pre-planned analysis that they have. So at the beginning of the study when they designed the protocol, they built in two early looks at the data. That’s often done in clinical trials, and one reason is that if the results look totally bad in terms of no efficacy at all then they can stop enrolling people into a study where there’s no chance that a vaccine is going to work. You don’t want to enroll a thousand people into a trial where there is no chance the vaccine is going to work. The other thing is if they see evidence of efficacy, particularly if they see high levels of efficacy, that can predict that even at the end, even if things aren’t as effective for the rest of the trial, it will still achieve the amount of efficacy that was the target, usually 50 or 60 percent.

Judging by the small amount of information within Pfizer’s press release, it appears that the latter is the case. The efficacy that they were seeing predicts that at the end they were going to have a vaccine that would be an effective vaccine and that’s above the threshold that was targeted for demonstrating efficacy.

So the next steps are, they continue in the trial to follow all the participants and they will probably be applying for emergency use authorization, where the vaccine can start to be used in the population before they get licensure of the vaccine. The regulators have said that they want at least two months of safety data on all these participants before they would do that, even if it showed efficacy. Based on the press release, that looks like it would be some time into December. What that means is that in various countries, as they apply for this release, that the vaccine can be used before you could actually go to a store and buy it. And public health would be able to use some of those emergency doses to start immunizing priority groups and begin the process as they complete the study and get full authorization for its use.

Presuming this vaccine turns out to be a winner, who gets it first and what factors would impact when everyday Canadians would be able to get it?

First, the vaccine has to be supplied to the various countries. Canada has what’s called advanced purchase agreements, which means that they arranged with companies to purchase the vaccines in advance of even knowing if they worked. Pfizer is one of those companies that Canada has an advanced purchase agreement with. What that means is that each country that wants to use it need to provide the data to those regulators. In Canada, Health Canada will look at those results and the rest of their information. And Health Canada has already been looking at information from these vaccines because they also did what was called a rolling submission. Typically, the company waits until they have all the information ready and then they present it to Health Canada as one package, and then Health Canada goes about the very rigorous and laborious process of reviewing all the data. Health Canada agreed with a number of the manufacturers that were most advanced to do a rolling submission. As data became available, the companies submitted it to Health Canada so they could start reviewing the data on the manufacturing and the testing and all that before the end so that they are well along in the process. It usually takes months and months and months to review all that, so they’ve already started.

Once Health Canada reviews all the data and they say, ‘Yeah, it looks as good as the press release,’ then they can provide emergency authorization (or an interim order, as it is known in Canada) and then public health can start delivering that vaccine as soon as it is delivered.

About a week or so ago, the National Advisory Committee on Immunization released a document on who the priority groups should be and how they should be done. The Canadian government will provide the vaccine to the provinces, which have started determining how they are going to be doing it. Each province decides on the delivery of programs. The federal government doesn’t decide on delivery programs, the provinces and territories do. So they’ll decide how to use those recommendations to do that. We haven’t heard what each province’s plans are yet, but we should start hearing about that over the next two to four weeks. Details about what the plans are in terms of the rollout. Frontline health care workers are in the priority groups, Indigenous communities are, people with higher risk, so older individuals. It’s what logically makes sense about who the priority groups are.

How positive a result is 90 percent and would it mean life could pretty much return to normal?

Ninety percent is an excellent result. One couldn’t have hoped for better than that. We would have been happy with 50-60 percent as a starting point. So, if 90 percent holds up over time that would be an excellent result. But we need a whole lot more information. Are there differences within that 90 percent as we learn more about the vaccine? And we can only learn about it with more time. But was that 90 percent in young individuals versus older individuals? Was it different in people who had some underlying medical conditions, was it lower in those groups? We need to know how it’s going to perform overall. We may not know that until we actually start using it in larger numbers of people.

It’s as good as one could have hoped for as a first step and, again, it’s the first vaccine. We don’t think this is going to be the only one. We hope this isn’t going to be the only one. We really hope that all these other vaccines that are in the pipeline, some of which will likely release interim results soon, we hope they are all effective because we need billions of doses. If everyone in Canada received the vaccine, that’s two doses per person – that’s 70 million doses. And Pfizer is not going to be able to supply the world with that. They can supply some and can be a major contributor, and they are talking about perhaps millions and even a billion doses down the line. But that’s down the line.