A recent study published in Clean Technologies and Environmental Policy reveals new findings on the impact of fossil fuel prices on employment.

Researchers Jinying Zhang and Melvin Cross partnered to construct a model to measure how a rise in fossil fuel prices could have an impact on jobs in within carbon industries. The two met at the Shandong University of Finance and Economics (SDUFE) in Shandong Province, China through the joint program led by Dalhousie University. Their shared interest in environmental issues led them to develop an economic model, when they were granted a research fund in 2016 from Dalhousie and SDUFE to support their research.

Melvin Cross is a retired associate professor of Economics in the Faculty of Science, where he taught courses in Environmental Economics from 1986-2015. Dr. Cross was teaching at Shandong University through the Dal and SDUFE Joint Program in 2014 when he met fellow researcher Jinying Zhang.

Jinying Zhang is an associate professor at SDUFE. When Zhang visited Dalhousie University in 2018, she brought with her an outline of what would become the research article that was published this April.

“Our paper has two contributions to existing research,” Dr. Zhang explains. “We provide an economic model for examining how carbon policies that increase the price of fossil fuel affect employment in an industry. We also provide an empirical analysis of the employment effect of carbon policies in China’s thermal power industry.”

We can expect to see a rise in the relative price of fossil fuels in the coming years — partly due to the introduction of carbon policies, regulations or carbon taxes. These policies are essential tocollective efforts to reduce our global carbon emissions.

The study, titled "Carbon Policies, Fossil Fuel Price, and the Impact on Employment" breaks down how this process will look as it applies to jobs within an industry that uses carbon-based fuels. 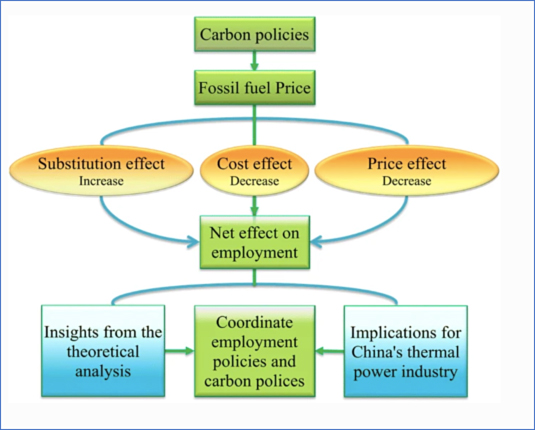 The model constructed by Jinying Zhang and Melvin Cross decomposes the impact of fossil fuel prices on employment to several economic factors.

“It might seem intuitively obvious that an increase in the price of carbon-based fuel will reduce the number of people employed in an industry that uses carbon-based fuel," says Dr. Cross  "However, this is not a foregone conclusion. When the economic model was used to guide analysis of data from China’s thermal power industry, there was a small, but statistically significant, increase in the number of people employed in the industry. The data did not show a reduction in employment in China’s thermal power industry."

While the finding was somewhat unanticipated, the small but discernible increase in jobs could occur as a result of industries employing workers to discover ways of using substitute fuels and of getting coal from less damaging sources, as well as economizing on the use of coal to generate electricity.

“We used econometric methods to test conclusions derived from the model by using data from China’s thermal power industry. The empirical analysis validates the insights derived from the theoretical model, says Dr. Zhang.

Drs. Cross and Zhang hope that their analysis will act as another valuable tool to inform countries who are enforcing policies within their carbon industries.

China is the world’s largest carbon emitter and how employment would be impacted by any policy is an ongoing concern everywhere.

“I think what’s novel in the paper is the economic model,” says Dr. Zhang. “What is critical for policy is the implications of the empirical model. The coordination of employment policies and carbon polices is necessary for mitigating the adverse effects on employment in the industries with price elastic demand for thermal coal and price inelastic demand for electricity or vice versa.”

It is important to understand interactions of elasticities when a policy changes the price of an input. If demand is price elastic, quantity demanded is relatively sensitive to a change in price. An increase in price will cause a relatively large decrease in quantity demanded. Typically, an increase in the price of an essential resource will cause a relatively small decrease in quantity demanded; that is, demand will be price inelastic. The interaction of an industry’s price elasticities of demand for the inputs it uses with price elasticities of demand for the products it produces will affect the quantity of the inputs it uses when the price of an input changes. Labor and fuel are inputs in the production of thermal power. If a policy causes unfavorable effects on employment that are not addressed, it becomes politically more difficult to implement the policy.

When applying this model to carbon industries in different parts of the world, there are many factors that must be taken into consideration. “If you’re in a different country, your data will be different, and the way in which you use your natural resources will differ as well,” says Dr. Cross.

Reducing carbon emissions requires a global effort, and studies such as this help us better understand the multifaceted implications of carbon policies, taxes and regulations.

The article, titled "Carbon Policies, Fossil Fuel Price, and the Impact on Employment," can be read here.