Scenes from the academia solidarity rally held in Halifax this week. (Photos provided by Theresa Rajack-Talley and Tim Bardouille)

As people around the world join together to take action in protest of anti-Black racism and police violence, many institutions — including universities and governments at all levels — are looking with fresh eyes at measures to address some of the longstanding issues and disparities at the roots of this historic moment.

That holds true for Dalhousie University as well.

A joint statement issued last Monday (June 1) from President Deep Saini and Vice-Provost Equity and Inclusion Theresa Rajack-Talley condemned the racist acts that have inspired such outrage and social action; reinforced Dal’s commitment to confronting systemic anti-Black racism alongside all forms of discrimination and intolerance; and emphasized the need to engage students and the broader Dal community in critical thinking and research on the causes and consequences of racial violence and subsequent actions needed.

A significant step in that regard occurred on Monday (June 8), with the Dalhousie Senate voting to approve efforts to establish a new academic program and a new research institute, both focused on Black studies.

Towards a major and new research institute in Black studies

The motions approved by Senate were:

The office of the Provost and Vice-President Academic will work with Faculty-based leaders to establish a committee, appropriately resourced, to develop a proposal for an interdisciplinary major/honors program in Black and African Diaspora Studies; to be presented for consideration by Senate no later than April 30, 2021.

The office of the Vice-President Research and Innovation will work with Faculty-based researchers and leaders to establish a committee, appropriately resourced, to develop a proposal for a research institute for Black Studies in Canada; to be presented for consideration by Senate no later than April 30, 2021.

The motions were put forward by Dr. OmiSoore Dryden, the James R. Johnston Chair in Black Canadian Studies, who noted the important role academia has to play in understanding and addressing the complicated and interconnected realities of anti-Black racism.

“One of the reasons anti-Black racism — and I would add police brutality — persists in Canada is because of the faulty belief that Canada is a haven of racial tolerance,” said Dr. Dryden, speaking to Senators in the virtual meeting on Monday. “There is more of a commitment to that belief than there is actually confronting the gross inequalities Black communities continue to face.”

Addressing those inequalities is cross-disciplinary work, she explained, with lenses that can be applied in the sciences, the arts and humanities, health sciences, data research and many other disciplines.

“If we are truly committed to developing and producing well-rounded and critical scholars in each of our faculties, we must centralize the discussions of colonialism and anti-Black racism and foreground the intersectional methods of decolonization and Black Studies,” said Dr. Dryden. “In order for all lives to matter, Black lives must matter.”

The motion received enthusiastic endorsement from Senators and administration, with President Deep Saini committing to supporting the Provost, the Vice-President Research and the broader community in bringing the two motions to life. Dr. Saini said he sees this as a pivotal time for Dalhousie when it comes to moving forward with concrete action on anti-Black racism and equity, diversity and inclusion in general.

“We have strong policies and have established initiatives and resources in place, and our faculty, staff and students have made — and continue to make — vital contributions to aid our understanding and to help shape the path forward,” said Dr. Saini, speaking to Senators.

“However, we must do more. We must all be accountable and drive for continuous improvement,” added Dr. Saini, who pledged to work together with Senate Chair Kevin Hewitt, Vice-Provost Rajack-Talley and others on determining immediate next steps for Dal to take further action. “The time to act in a resolute way is now.”

Dr. Hewitt opened the meeting with a moment of silence for the lives lost from anti-Black racism, and thanked Dal’s academic community for the statements of solidarity and support that have come from various departments and Faculties in the past couple of weeks. “I hope we can all make this moment an inflection point in the long arc of our history,” he said.

Work across the university

A full major in Black and African Diaspora Studies will build on Dal’s existing minor in the same subject, which was launched in 2016. The development of such a major was highlighted in the Lord Dalhousie Report, released last year, which provided recommendations on ways Dal could work to address anti-Black racism and the legacy of its founder’s intersections with the legacy of slavery.

Some of the other work underway to address the findings of the Lord Dalhousie report include a joint academic conference with the University of King’s College on the history of slavery, expanding partnerships with historically Black universities and colleges in the U.S. and Caribbean, and continued work in developing a full African Nova Scotian strategy for the university.

Theresa Rajack-Talley, who also spoke at Monday’s Senate meeting with an update on development of a racialized violence policy for Dal (expected to be available for consultation this fall), says this collective work speaks to the institution’s core values.

“As an institution of higher learning, we have an obligation to provide an education and a community that works together to address systemic anti-Black racism and all forms of discrimination and intolerance,’ says Dr. Rajack-Talley.

This week also saw members of the Dal community in Halifax take part in a march and rally in solidarity with the Black Lives Matter movement and broader efforts to address systemic racism.

The march was part of a broader campaign named named #ShutdownAcademia and #ShutdownSTEM, a one-day event focused on collective action from within the higher education community. An estimated 300 academics, students and community members took part in the rally, which took place on the Halifax Commons. 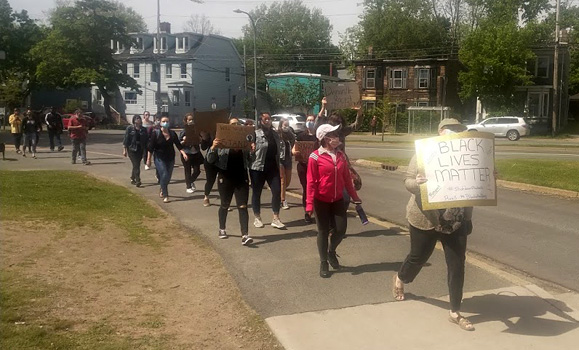 Tim Bardouille, an assistant professor in the Department of Physics and Atmospheric Science, organized the Halifax event.

“The academic strike for Black Lives Matter gave me the time I needed to process the difficult emotions that occur when racist police brutality highlights the systemic racism all around us,” he explains. “This rally was a chance to bring people together to express those emotions together.

“I’m thankful to Barb Hamilton-Hinch, OmiSoore Dryden and John Lincoln for their amazing expression of important messages. I’m glad that I was able to share the experience of non-violent resistance with hundreds of people. It is one step on a long path, but every step matters.”