Poster for "There's Something in the Water."

When you're done with Tiger King on Netflix, you might want to check out another documentary — this one that, for Nova Scotians, hits a lot closer to home. 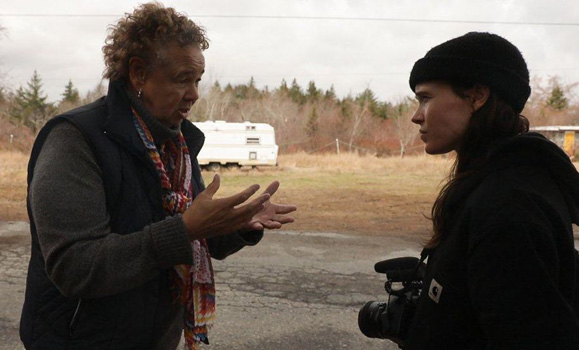 The film is based on Dr. Waldron's book of the same name which examines the legacy of environmental racism and its health impacts on Indigenous and Black communities across Canada.

Page and Dr. Waldron connected on social media after the actress had tweeted an endorsement of the book  while the Nova Scotian-born Page, was researching environmental racism in her home province. 10 months later, that collaboration turned into a powerful documentary which was viewed at sold-out shows at international film festivals and received standing ovations.

While she sees these efforts as moving closer to the goal of achieving environmental justice in Nova Scotia, the Netflix release of the film will serve to magnify and connect on a larger scale.

"It will not only elevate and amplify the voices of affected communities in Nova Scotia on a global scale, but will also help to build bridges and solidarity between affected Nova Scotians and communities around the world that are on the frontlines of environmental justice struggles and movements," says Dr. Waldron.

"The rural Black and Indigenous communities that I work with in Canada are already suffering worse health outcomes related to respiratory illness like asthma and higher rates of chronic disease like cancer because where they are living, in many cases next to toxic waste sites.

"The coronavirus crisis is highlighting a similar phenomenon to environmental racism where those who are marginalized based on income, socio-economic status, disability, age and other factors  are going to be disproportionately impacted by the  pandemic."

Ingrid Waldron is an associate professor in Dal Health’s School of Nursing with a cross appointment to the Department of Psychiatry. Her book, There’s Something in the Water: Environmental Racism in Indigenous and Black Communities, is published by Fernwood Publishing. It was awarded the 2020 Society for Socialist Studies Errol Sharpe book prize and the 2019 Atlantic Book Award for Scholarly Writing.