"I’m the shoot for the moon, land on the stars person," says first-year law student Sabre Lee. "I’ll go as big and far as I can get.” (Staff photos)

When Sabre Lee decided to pack her bags and leave Ontario for northern New Brunswick a few years ago, she did so in order to reconnect with her Mi’kmaw roots — and the land her mother was taken from.

A master’s student in Ottawa at the time, it wasn’t the easiest of choices, but thankfully she was given the option of completing her Indigenous Studies degree from a distance. Setting up home in the community of Eel River First Nation, close to the border with Quebec, she began what she describes as an experience of “relearning.”

“Within my own ancestry over the last 20,000 years, 90 per cent of all my ancestors were based in this area,” says the 27-year-old, referring to Mi’kma’ki — the ancestral territory of the Mi’kmaq that encompasses the Gaspe region of Quebec, New Brunswick, P.E.I., Nova Scotia and parts of Newfounland and the state of Maine.

Although she was raised alongside two brothers in Collingwood, a small town just north of Toronto, her mother is originally from the Eel River Bar community. Caught up in the so-called “Sixties Scoop,” where Indigenous children were taken from their birth parents and placed in foster care or adopted homes, Sabre’s mother eventually ended up in southeastern Ontario. Despite being torn from her community and culture at a young age, she maintained some Mi’kmaq cultural practices at home, which rubbed off on her daughter.

“It’s new to me, but it doesn’t necessarily feel entirely new,” says Sabre, of the experience of reconnecting with her family’s heritage. “It feels very homey with deep roots, and it’s a very unique experience.”

Sabre’s Mi’kmaw heritage has also proven to be inspiring for her on an academic level, informing the methodological approach she used in her master’s thesis on the Indian Act as well as her current work as a first-year law student at Dalhousie.

Life was very different for Sabre not long ago. As a high school student, she bounced around from school to school, expelled for everything from fighting to speaking out of turn in class. She says her high school teachers were convinced she would be a drop out.

“I think there was a huge factor of intergenerational trauma,” she says. “Some people are okay being away from community and some people are not. I was someone who was not. I felt very different and very out of place all the time."

Amidst all the challenges, she managed to carve out a space where she felt more connected to others: on the sports field. A skilled rugby player and the only female member of the men’s football team, Sabre was eventually recruited by a coach at Concordia University in Montreal.

"As long as I had access to athletics, I could find a way to survive,” she says. “To me, that’s really ironic because it’s that team comraderie that I was missing from not having my community and family. So, I was replacing it with spaces and teams." 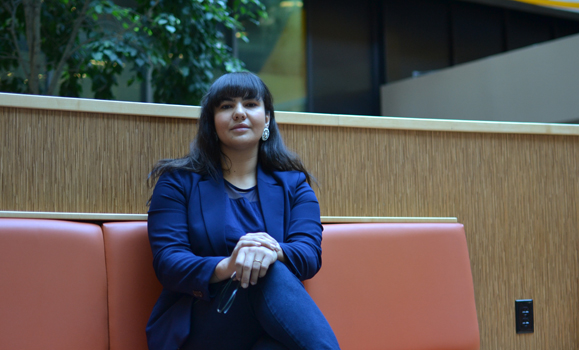 While Sabre excelled on the field, she was still just barely coasting by in terms of grades. That is, until she met an Inuit art history professor in her second year.

“She was the first person to say, ‘You are capable, you can succeed in academia if you want to,’” she says. “I was like, ‘Oh, I didn’t realize this was an option,’ basically.’”

It was a turning point for Sabre, who ended up with a double major in Art History and Indigenous studies. She also become a mentor to other Indigenous students as a way to give back that inspiration that she got.

When deciding on where to go to law school following her master’s at Carleton, Sabre wanted to choose somewhere closer to her roots in Eel River. Dal fit the bill (her father is from Halifax as are her grandparents), with the added bonus of having the Indigenous Blacks and Mi’kmaq (IB&M) initiative program.

She says IB&M, celebrating its 30th anniversary this year, as well as the Indigenous Student Centre at Dal have played an intergral role in her settling into her studies in Halifax.

“I have found it extremely beneficial. I don’t think I would be as confident as I would be at any other school because of those supports and resources.”

Her first term at Dal has been all she imagined and more. She says it has “demystified” a lot for her about what law is and isn’t and the history of it and how it’s been put into practice. While it’s still early in her degree (which will be three years, plus a year of articling), Sabre says she’s already gravitating towards property law and land claims.

“I would love to actually work in the land claims scheme of things within Aboriginal law,” she says, “but it’s still really early and I am open to where the road takes me. I don’t have any plans of slowing down. I’m the shoot for the moon, land on the stars person. I’ll go as big and far as I can get.”