For someone who was immersed in soccer from a very young age, getting to referee at the Women's World Cup in France this year was a dream come true for Marie-Soleil Beaudoin.

The 36-year old, who is also a professor of physiology and biophysics in the Faculty of Medicine at Dal, reffed four matches during the month-long tournament that just wrapped up this week, including the semifinal between the Netherlands and Sweden.

"It exceeded all of my expectations," she says of the experience. "I got to do some of the high risk, big risk games."

Another of those was the round-of-16 match between France and Brazil, which she calls "a highlight" given the electric enthusiasm among fans of the two teams.

All eyes on the pitch

With billions of people around the world watching, there's a lot of attention paid to referees and assistant referees making calls, especially during such high-profile matches. And officials, like players, are judged on their performance and called up to the field accordingly.

"There's a lot of pressure," says the Quebec-born referee, "but it's not something we can let get to us."

Dr. Beaudoin's rising star as an international soccer official follows years of training and experience. She has been reffing for 16 years now, receiving her regional badge in 2008, provincial status in 2009, national badge in 2013 and her FIFA badge in 2014. And earlier this year, she became the first female referee to work a Canadian Premier League game — and did so right at home, in a game hosted by the new Halifax Wanderers team.

Following the FIFA qualification — a designation that allows you to officiate at the international level — Dr. Beaudoin has had the chance to handle reffing duties at two FIFA Under-17 Women's World Cup tournaments, including the 2016 tournament in Jordan and the 2018 tournament in Uruguay where she refereed the final with Jamaican assistant referees Princess Brown and Stephanie-Dale Yee Sing.

"That led me to this appointment to the senior Women's World Cup," she explains. 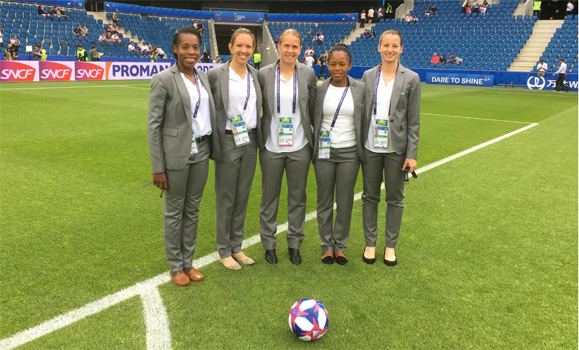 Dr. Beaudoin, second from left, with other officials before a World Cup match earlier this month.

There was a lot of training involved along the way as well, from FIFA seminars and fitness training to video testing and more. It was a busy load for someone who was also building a career as a teacher and academic.

But Dr. Beaudoin, who joined Dal in 2015 as an instructor, sees parallels between her day job and what she calls her "hobby."

"There's a lot of similarities between teaching and reffing. You need to be able to manage the emotions of the players and make them believe in your leadership. And both are very creative; there's never a right or a wrong situation.”

She's still trying to figure out how refereeing fits into her new status as a parent to a 15-month old son, but having flexible colleagues and a supportive boyfriend (who is also a soccer referee) certainly helps.

Dr. Beaudoin's love of soccer stems back to her own childhood being one of three girls growing up in a soccer household. Her parents would coach them and encourage them as they played in leagues over the years, until eventually Marie-Soleil became a coach herself and then a referee.

That deep love of the game makes her experiences on the field especially exciting.

"We have the best seat in the house,” she says.