A leading China expert who got his start in the field as a doctoral student at Dalhousie more than 40 years ago returned to campus this month for a lecture on what the Asian country’s deteriorating relationship with the United States means for Canada.

Paul Evans, professor with the Institute of Asian Research in the University of British Columbia’s School of Public Policy and Global Affairs, said Canada’s arrest of the chief financial officer of China’s Huawei Technologies late last year at the request of the U.S. provides a glimpse into how Canada needs to rethink its China relations.

“This is going to be the first of a stream of American requests for Canada to line up more closely to the American position on the coming confrontation with China,” said Dr. Evans.

The U.S. is seeking extradition of the executive, Meng Wanzhou, on suspicions that she was instrumental in Huawei’s alleged violation of U.S. trade sanctions against Iran.

Dr. Evans delivered this year’s Glyn Berry lecture as part of the 3rd Century Symposium, a two-day gathering organized by the Department of Political Science to highlight the achievements and ideas of the department’s graduates and showcase academic and non-academic career paths of accomplished alumni over the years.

For Dr. Evans, who completed his PhD in 1981, “there was this kind of vibe” and something “really appealing” about Dal’s political science department as it was a small department with big ambitions that had confidence in its graduate students.

It was that support that emboldened him to complete a dissertation on John Fairbank, a Harvard historian and specialist of China-U.S. relations during their tumultuous run in the 1950s. First published as a book in the late 1980s, Dr. Evans is now writing a second edition of the biography and is involved in a project looking at what can be learned from Fairbank to help us “through the complexities of dealing with a very assertive China” today.

As Dr. Evans explained in his talk, the Huawei case and the arrest of Meng are part of a much larger trend resulting from China’s emergence as a global power and an America First policy in the United States that is causing “great geoeconomic and geopolitical turbulence.”

In essence, the U.S. is confronting a peer competitor for the “first time in my lifetime,” said Dr. Evans. He said the trade war between the two countries is fundamentally about its capacity for innovation in emerging technology fields (such as 5G wireless technology, artificial intelligence, and quantum computing) and fears among some about how its growing global presence is eroding American democracy and institutions.

This evidence of climate change in the U.S.-China relationship reflects a deeper discord that complicates what Ottawa is going to do, he said. 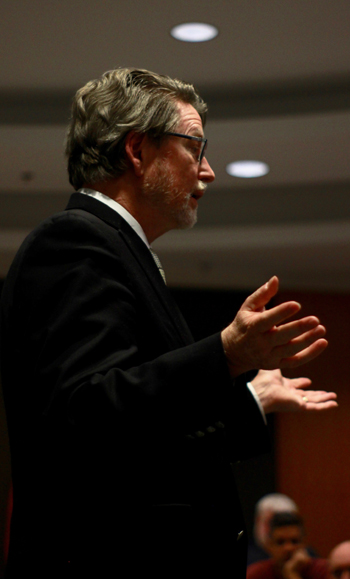 “We cannot continue in the way that we had an engagement strategy with China for roughly the last 40 years. We’re going to have to do something, not dramatically rejecting what we’ve done, but something new. Our approach is going to have to be adjusted as the world is changing,” he said.

Dr. Evans said although some have suggested Ottawa take a hard line in relations with China, studies he and colleagues at UBC have carried out show that these attitudes may not be reflected as strongly in public attitudes. For instance, Canadians still rank economic and commercial ties as the number one priority in relations between the two countries.

All this points to the need for Ottawa to consider a variety of perspectives in addition to the United States’ when deciding how to best approach relations with China — including the Chinese perspective itself.

For David Black, professor and chair of the Department of Political Science, Dr. Evans’s lecture and the 3rd century symposium more broadly highlighted just how much impact graduates of the department are having.

"We are always inspired by our students,” he said, “and these are people who have been students here and who are coming back to share their knowledge and experiences. We hope this event will excite and encourage our current undergraduate and graduate students."