Dalhousie launches partnership with the National Centre for Truth & Reconciliation

The entrances to the MacRae Library Learning Commons (left) and the new hub for the National Centre for Truth & Reconcilation. (Danny Abriel photos)

Indigenous culture, music and language was at the centre of an important event to launch Dalhousie’s partnership with the National Centre for Truth & Reconciliation (NCTR) on Tuesday, February 5.

As the first East Coast hub of the NCTR, the space, located in the Indigenous Community Room of the MacRae Library on the Agricultural Campus in Truro, will encourage education and awareness about Indigenous history and will serve as a constant reminder to students, faculty and staff of the university’s commitment to reconciliation. 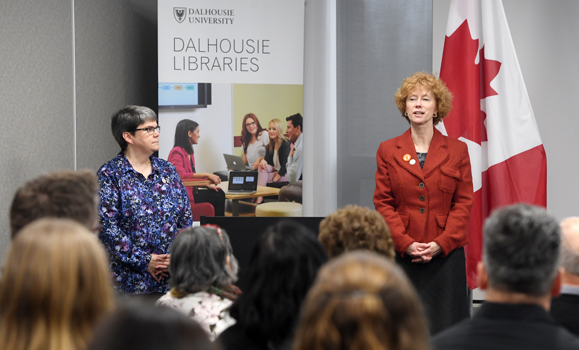 “Dalhousie is proud to house the first NCTR location in Mi'kma'ki, the traditional and unceded territory of the Mi’kmaq,” said Donna Bourne-Tyson, university librarian for Dalhousie. “Due to the archival and research-focused aspects of the NCTR, the Dalhousie Libraries are the anchor of this partnership on behalf of Dalhousie.”

In addition to archival and research expertise, the Dalhousie Libraries have recently hired an Indigenous services librarian, Morning Star Padilla, who will facilitate connections between the local centre and the surrounding communities.

The NCTR opened in 2015 at the University of Manitoba — a result of the 2007 Indian Residential Schools Settlement Agreement — to be the permanent home for all statements, documents and other materials gathered by the TRC. The NCTR was created to preserve the memory of Canada’s Residential School system and legacy. 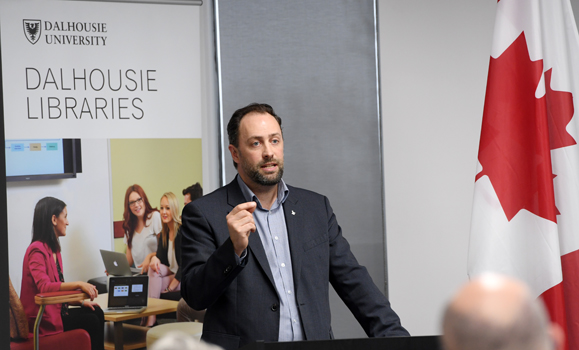 “We are thrilled to see this partnership with Dalhousie University take this significant step forward,” said Ry Moran (pictured above), a member of the Red River Metis and director of the NCTR. “The NCTR was founded on the vision of a network of interconnected hubs working from coast to coast to coast, keeping the fire of Reconciliation lit in this country. Dalhousie, through this Centre, is helping advance this vision.”

Through this partnership Dalhousie Libraries will ensure the NCTR’s archives are more accessible and better used in the Atlantic region. In the future, Dalhousie will grow the service to include contributing additional holdings to the NCTR; facilitating additional oral history and community narratives, research and reports; supporting a broad scope of public education, research, cultural and reconciliation activities; assisting the NCTR in serving the public in a variety of Indigenous languages, English and French and fulfilling regional or community needs and desires related to residential school research, education and reconciliation.

Highlights of the event included a welcome song performed by Catherine Martin, a member of the Millbrook First Nation and an independent, international award-winning film producer and director; and a recitation of Rita Joe’s poem “I lost my talk,” read by her daughter Francis Sylliboy. Joe was a residential school survivor and Mi'kmaw poet and songwriter.  She was awarded the Order of Canada, and appointed to the Queen’s Privy Council. 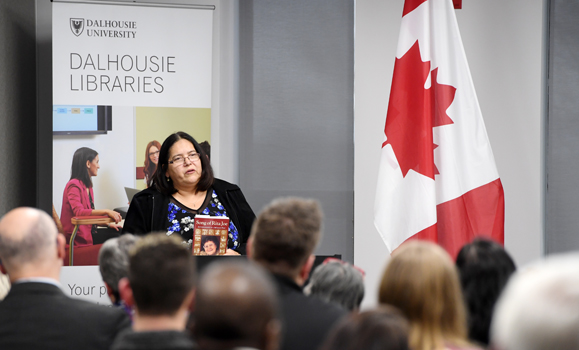 Francis Sylliboy speaks at the event

“I lost my talk” is also mounted on the wall in the Indigenous Community Room. Elder Jane Abram, one of the Elders in Residence at Dalhousie and a member of the Millbrook First Nation performed a smudging ceremony for guests in attendance Elder Jane is also a residential school survivor.

“We’re proud to open this hub on the Agricultural Campus, in this beautiful new space, with its proximity to a number of Mi’kmaq communities, including Millbrook, Sipekne’katik, Glooscap and Pictou Landing,” said Teri Balser, Provost and Vice-President Academic. “This partnership with the National Centre for Truth & Reconciliation is an important bridge between the university with the community and we’re pleased to offer this service to assist residential school survivors and family members.”

“There is still much work to do in the coming years as we continue to incorporate Indigenous education, research and support into the life of our institution.” 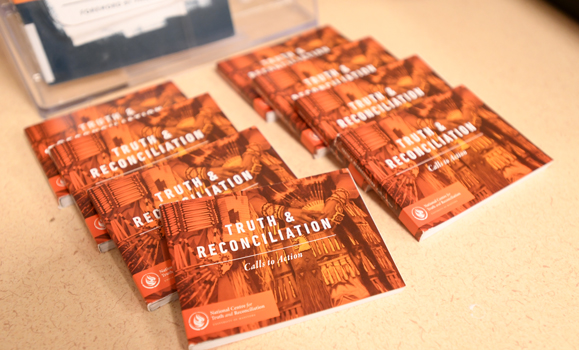