The person tasked with leading the Dal community in the interim is no stranger to the president’s role, having spent more than a decade as president — some of them as Dr. Florizone’s boss — at the University of Saskatchewan.

But don’t expect Peter MacKinnon to be just a seatwarmer for whoever’s next to come at Dal.

“I do not want to be a placeholder,” says MacKinnon, with great emphasis. “I want to identify areas in which I can advance Dalhousie’s mission, or contribute to the advancement of that mission, while I’m here.”

MacKinnon, whose first day in office was Tuesday (Jan. 15), will serve as interim president through the end of June. For someone who grew up in Prince Edward Island, and who graduated with his B.A. from Dalhousie 50 years ago this year, MacKinnon was thrilled by the opportunity to return to his roots and make a new contribution to Dal’s 200-year legacy.

It would be hard to find a candidate better suited to serving as Dal’s interim president than Peter MacKinnon.

He’s done the job before, of course — not just his successful, 13-year tenure at the University of Saskatchewan, but also as interim president of Athabasca University from 2014 to 2016. An Officer of the Order of Canada, he’s chaired Canada’s national association of university presidents (Universities Canada), served as the inaugural Prime Ministers of Canada Fellow at the Public Policy Forum in Ottawa, and has written two recent books on issues in Canadian higher education: 2014’s University Leadership and Public Policy and last year’s University Commons Divided: Exploring Debate and Dissent on Campus.

And it all began more than 50 years ago when he walked Dal’s halls as a student, taking courses in History, Political Science and Economics from beloved professors like J. Murray Beck, Lawrence Stokes and Norman Morse. Those classes have stuck with MacKinnon through his life’s journey into law, academia and, eventually, administration.

“It’s a formative period of time,” says MacKinnon, who in 2012 would also receive an honorary doctorate from his alma mater. “You never forget the people, the features, the formative impact.”

He followed his time at Dal with a law degree from Queen’s, after which he joined the faculty at the University of Saskatchewan. As the years went on, he found himself drawn to administrative roles that allowed him to contribute, in more direct ways, to the university’s path — first as a dean, then as acting vice-president academic and as university president.

So why come back to the role now? Noting that he’s now 71 years old, MacKinnon says he didn’t make that decision lightly. Coming to Dalhousie takes him away from his home in Canmore, Alberta, and all his adult children live out west as well. But in the end, it was an opportunity he couldn’t pass up.

“Returning to Dalhousie, Halifax and this part of the country 50 years after I graduated proved initially attractive and, ultimately, irresistible,” he says.

Members of the Dal community will get to meet MacKinnon first-hand at one of two welcome receptions this month: the first in Truro on Friday, January 18, the second in Halifax on Monday, January 21.

He’s looking forward to getting to know the community better, and to help ensure that the positive initiatives underway at Dal continue. “You want to sustain the momentum, the energy I’ve seen at Dalhousie in recent years,” he says.

And he comes back to the idea he started with: wanting to not just keep Dal’s momentum going, but to make his own contribution to it.

“When I leave this office, I want to be able to say to myself that I helped — that I, in some important, material ways helped sustain direction and energy, and perhaps added something to it as well.” 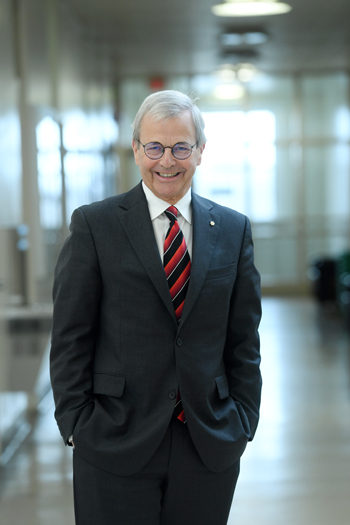 “Collaboration is not only a desirable feature of [university] administration — it’s an essential one. You can only be as effective as the team that you work with.”

On his pursuits as an author...

On following Dr. Florizone — who considers MacKinnon a mentor — in the President's Office...

“Richard said to me, 'I didn’t follow in your shoes at USask but you followed in mine at Dal!' . . . He’s a person of tremendous ability and judgment. I have no doubt there will be times in this role when I’ll pick up the phone and give him a call.”

What's your favourite hobby or pastime?

Hiking and Nordic skiing — as you can imagine, Canmore is a wonderful place for those kinds of activities. I also admit to being a devoted baseball fan.

Reputation can be hard won and easily lost, so conduct yourself accordingly.

Beethoven. Didn’t even have to think about that one!

Nelson Mandela. There were many fascinating features of Mandela’s life and times, but what is most striking to me is his magnanimity. All that he endured, including much of his life in prison and experiencing oppression, and yet he emerged with a constructive, magnanimous spirit that I find shining examples in.

This article is part of a new series shining a spotlight on the personalities and priorities of Dal's senior leadership team. Look for more profiles in the weeks to come, and revisit previous profiles at the Leadership and Vision website.