From the Archives: Paying tribute to those who served

From the Archives highlights the stories behind some of the unique and interesting artifacts, memorabilia, letters and other items of note stored inside the University Archives.

This year marks the 100th anniversary of the end of the First World War, in which nearly 600 Dalhousians served. And pretty much from the moment the war ended, there were discussions on campus on how best to remember those who gave their lives in service.

The idea of a university war memorial was well under consideration by August 1920, when G. Fred Pearson, general manager of Dalhousie's Million Campaign, wrote to architect Sir Edward Lutyens, designer of the Cenotaph at Whitehall in London, England, requesting permission to create a replica monument in the heart of the newly established Studley Campus. Permission was granted, but the proposal was likely too ambitious in light of Dalhousie's master building plan, which would dominate spending and fundraising efforts for the next decades.

Letters and editorials in the Dalhousie Gazette throughout 1920 suggest that student opinion was sharply divided on the issue of whether a war memorial should be utilitarian in nature. Meanwhile, the administration made vague promises to build a memorial gymnasium. By 1927, no memorial of any sort had been erected, and the Student Council had instead contributed monies raised by subscription to the Halifax War Memorial in the Grand Parade, which was unveiled in July 1929.

The university was compelled to build a new gymnasium when the temporary gym, known affectionately as the Studley Barn, was destroyed by fire in May 1931. However, in the cornerstone-laying ceremony on 12 November 1931, only Gerald Stewart, Student Council president, referred to the gymnasium as a memorial to those who had lost their lives in the war. 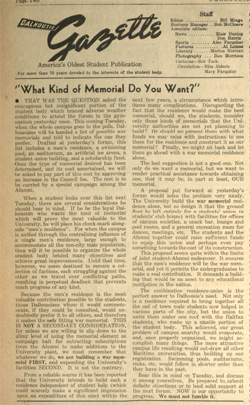 It wasn't until after World War Two that a Senate Committee was appointed to once again explore the idea of a war memorial. In March 1946, a plebiscite determined that student preference was for a men's residence, followed by a swimming pool and a rink.

Months later critical editorials appeared in the Gazette, this time suggesting that the latter choices were hardly fitting memorials, and that a men's residence, while sorely needed, was surely the responsibility of the university, and "thoughts of raising part of the necessary funds from student contributions seems another epic in the old story of 'passing the buck'."

In 1947 the memorial committee struck by Senate determined to build a rink to commemorate the sacrifices made by Dalhousie students during both world wars, but it was November 1950 before this was achieved with the official opening of the Dalhousie Memorial Rink. The Gazette's coverage of the ceremonies makes no reference to its role as a memorial. 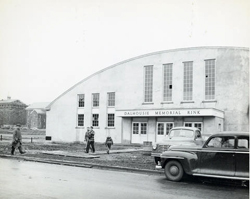 When the rink burned down in 1975, the replacement Memorial Arena, which opened on 11 November 1982, was dedicated "in honour of those who served and in memory of those who gave their lives in defence of Canada."

While no cenotaph was ever erected, and both memorial rink and arena have disappeared from Dalhousie's landscape, one can still find World War One tributes scattered across the university's campuses. The foyer of the Henry Hicks is lined with plaques listing the war dead by class; a bronze plate in Truro's Cumming Hall commemorates the 22 students from the former Nova Scotia Agricultural College who were killed overseas; and the Nova Scotia Technical College (now Sexton Campus) honoured its "youthful engineers from this college who gave their lives and of their lives in defence of their country and its cherished institutions."

There is also a temporary exhibition about the university’s contribution to the First World War currently on display on the fifth floor of the Killam Library, curated by the Dal Archives team.