Up close with the largest animal on Earth

It’s certainly sad when to learn of a whale’s death, given they are some of the ocean’s most majestic mammals. While no doubt tragic, researchers on Dalhousie’s Agricultural Campus are looking for the silver lining.

Over a year after a 63-foot female blue whale — the largest animal species on Earth — was sighted floating off the coast of Nova Scotia, Dal’s Gordon Price, Chris Harvey-Clark, Christopher Nelson and a team of volunteers are working to turn the loss into a learning opportunity.

With the help of a small army of eager volunteers, Dr. Price (associate professor) and Prof. Nelson (senior lecturer, Department of Engineering) of Dal’s Faculty of Agriculture have been working tirelessly to preserve and degrease the bones of the blue whale to create a mounted display that will be mounted at the university in a location to be determined.

Not only will the bones act as a public education piece, but the ultimate goal of the project is to develop a better understanding of the pathology of these creatures. The team is looking to better understand the conditions that may have led to the whale's death.

“Volunteers from across the region initially worked on the beach in the South Shore to conduct a necropsy and de-flesh the bones,” says Dr. Price. “Coordinating with members of the Marine Animal Rescue Society and the Department of Fisheries and Oceans, the bones were transported to my field research site in Truro, the Bio-Environmental Engineering Centre, for composting.” 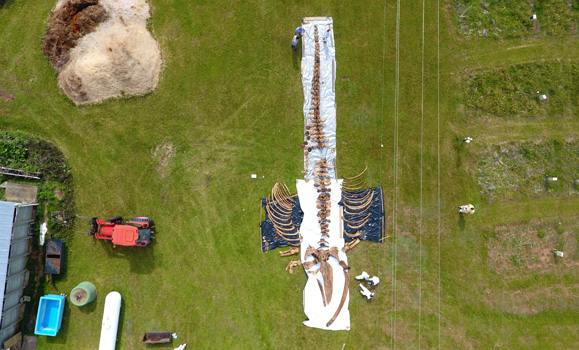 Typically, this degreasing is done with toxic and harmful solvents that can impact human health through direct exposure or contaminate the environment. Dr. Price has developed a mix of feedstock materials to act as an effective biological mechanism to remove a large proportion of grease. In doing this, the compost that is left over can be used to benefit other agricultural practices. 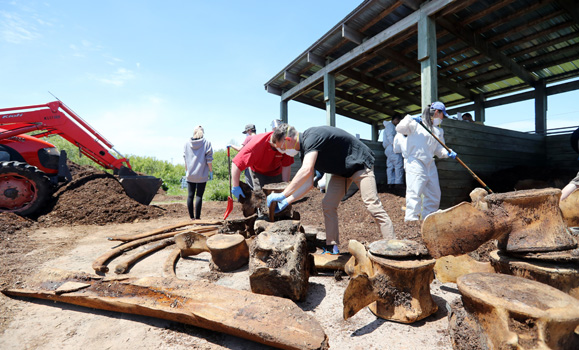 “The whole point of the process is that once you are done with the degreasing stages of the bones, the remaining compost material is a nutrient rich stable amendment that can be used in agricultural soils as a soil conditioner or source of fertility,” says Dr. Price. “The goal is any waste or leftover material is now converted into a valuable organic resource.”

While Dr. Price and his team were working to preserve the blue whale bones, another whale carcass was made available to their research. The team received a North American Right Whale carcass as part of an initiative by the Department of Fisheries and Oceans Canada. The idea is to repeat the process on these bones so they can be used at Moncton’s Science Enterprise Centre.

“We are looking to develop a public education campaign related to the impacts that people have on the ocean environment,” Dr. Price explains. “This starts with having students participate in activities of preserving the remains and educating them about the life cycles and conditions of these creatures.”

“We hope to develop a composting protocol for communities where marine animals may wash up on the beaches. This could be part of a process to preserve the remains,” says Dr. Price. “We also look to build displays within these communities as an educational centrepiece and local attraction.”

With so many complex parts, the composting process of whale bones is certainly no small task. Looking to have as much help as possible and wanting to extend the educational aspect as far as they could, the researchers invited high school students from Cobequid Educational Centre’s (CEC) Biology and Oceans classes to join in the process of removing the bones from the compost and identifying them. 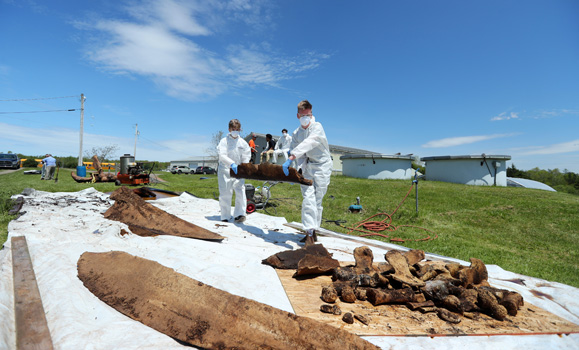 “Students had the unique opportunity to build on what they already know about anatomy and get a hands on lesson that will enrich their minds in a new and engaging way,” says Elser. “In addition to whale anatomy, students were taught the appropriate procedure for digging whale bones out of the compost. While some students were tasked to remove a large section of the blue whale lower Jaw which weighed 500 lbs, others uncovered vertebrae and rib bones.”

He hopes the experience helps to promote students’ interest in both biology and research at Dal’s Ag Campus.

“We would like to make this a fully integrated part of what we do throughout the whole project,” adds Dr. Price, “to invite volunteers from schools and the community, to participate in the various phases of preparation and these skeletons for display.”

While Dr. Price is incredibly proud of the work that is being done, he explains that he could not have done it without the collaboration of key faculty members at Dalhousie including Christopher Nelson and Dr. Chris Harvey- Clark, university veterinarian.  The project is also supported by David Gray, dean of the Faculty of Agriculture, and Chris Moore, dean of the Faculty of Science. 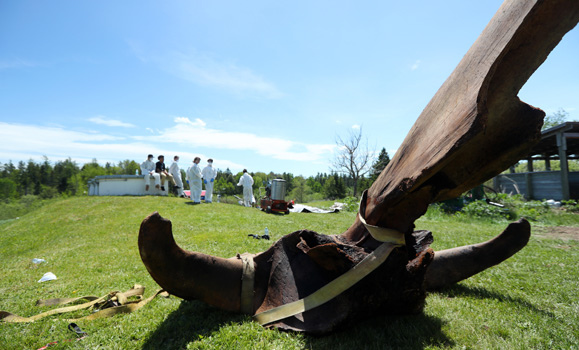 “Our research has received incredible support from staff and scientists in the Department of Fisheries and Oceans Canada, as well as other groups who have provided significant time toward helping with the preparation of the remains including the Marine Animal Rescue Society and a collaborator from Lincoln-Memorial University, Dr. Paul Nader,” Dr. Price says.

Dr. Nader has had a passion for aquatic mammals since he was a child. “I think what Dalhousie University is doing is putting in people’s minds how special whales are,” he said.  “This is such a team effort and I’m lucky to be part of the team.”

So while a washed up whale carcass may seem like a heart-wrenching loss to some, the educational opportunity is not lost. Dr. Price and his team of volunteers will continue to work diligently to better understand how human activities are impacting these ocean creatures and educate the public to ensure that life underwater remains viable for years to come.