Both Jennifer Frail-Gauthier and Brian Lesser completed graduate degrees at Dalhousie while simultaneously holding down jobs at the university. As they get set to graduate this week, they reflect on the experience of being an employee and student at the same time. 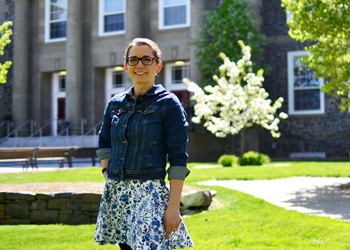 Just hours after she receives her PhD this Friday, Earth Sciences grad Jennifer Frail-Gauthier will return to the stage for another convocation ceremony — this time, one for her former students.

“I volunteered to stay and be on stage to pin gowns for the Biology ceremony,” says Jen, who has been a part-time Biology instructor at Dal since 2008. “I thought I should be there for them.”

Jen’s former students won’t be the only young people she’ll be sharing convocation day celebrations with. Her two sons, 11-year-old Dylan and six-year-old Erik, will also be on hand.

Completing a PhD can be a challenging endeavour in its own right. Doing so while balancing teaching duties and raising young children adds a whole other dimension to the experience.

“I would spend as much time as I could with the kids during the day and then they would go to bed and I would write,” she says, referring to work on her dissertation on the ecology of Eastern Canadian salt marshes. “Between my kids and my students, I had a lot of people to look out for.”

Jen first discovered her passion for teaching in 2004 when she worked as a teaching assistant during her third year as an undergrad in Marine Biology at Dal. Later, during a short stint as a master’s student in Biology, she took on a role as a lab instructor — a position she held onto during an early transition out of the Biology degree and into the PhD program in Earth Sciences. Two other courses, including a summer fieldwork course in coastal ecology she designed, were added in along the way.

Despite her busy schedule, she still managed to fit in other work and projects as well. She coauthored Coastal Wetlands of the World, a Cambridge University Press text released in 2014, works as a mentor in the Studying for Success program at Dal, and routinely travels to high schools around Nova Scotia to get more young people interested in marine science.

Students and colleagues alike have praised Jen over the years for her enthusiastic, engaging and personal approach to teaching. In 2014, she received Dal’s Sessional and Part-Time Award for Excellence in Teaching.

“Students always appreciate that I can be someone to talk to, so I’ve seen a lot of mutual respect happening,” she says, noting that she always tries to learn students’ names quickly and is open about topics like mental health.

“Students say, ‘I did better in her course because I wanted to do well for Jen.’”

With her PhD finally in hand, Jen says she’s looking forward to the next stage of her teaching career and guilt-free days on the beach this summer with her husband and kids.

She’s also excited to finally be receiving her graduation garb.

“I’m usually a ball cap and ponytail kind of person, but I just want that big, floppy hat,” she says, laughing. “I’ve been waiting eight years for that.” — Matt Reeder 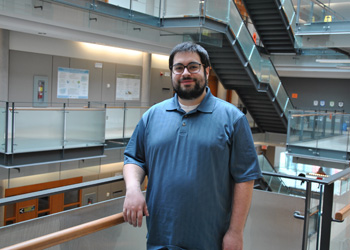 Brian Lesser works as an instructional systems administrator at Dal, managing support and training for Brightspace (the university's learning management system). He's also been attending classes for the past three years to complete a Master of Library and Information Studies. "It fit well with my current job," he says, "and it opens the door to new opportunities."

It might not seem like the most obvious choice, but Brian points out that what he does has a lot in common with the job of a traditional librarian working at a reference desk: connecting people with information.

In Brian's case, that means making sure students can access course readings, practice quizzes and discussions, and that instructors have the resources they need to support their students. He takes the responsibility seriously.

"My job seems like it should be a technical job, but it's more about supporting people, working with vendors, configuring settings so that they're usable. This degree has helped me bridge the technical background. It's helped me figure out how to be a people person."

Unusually, Dal's learning management department is housed in the library (at most universities in Canada, you would find it in the IT department). The difference, he says, makes for a greater focus on service. That's what connects his studies to his work.

"The focus throughout all of the MLIS courses is service: knowing your people. It doesn't matter whether it's a literacy program or a library service or a help desk; no matter what service you're providing, step one is understanding your community."

His Managing Research Data course put him face to face with a community in need of information management guidance. His professor, Mike Smit, connected his students with researchers at Dal who want to make the data they are collecting more organized and easy to share with other researchers.

It's a practice that's becoming more important as data-capturing technology becomes more advanced. Researchers are able to collect vast quantities of data that could be relevant far beyond the scope of their own work and have potential for collaboration and cost-saving. But unless they take steps to organize and describe what they're collecting, it isn't useful to anyone else. The students in Smit's class interviewed researchers and made recommendations.

"It's something researchers know is coming, they have to start thinking about this," Brian says. "A lot of times researchers think they'll be starting from scratch, but a lot of it is just minor tweaks to their process. In the end, they were immensely thankful that we were there to get them thinking about these questions."

Brian might be graduating, but he's not giving up the university community he's come to know so well anytime soon. His degree means he's now more qualified to move to a management position but he hopes to stay in the academic world. "It's the energy. In September every year — it's exciting." — Nicole Maunsel