On Saturday night (May 5), at a private reception at the East Coast Music Awards, Dalhousie President Richard Florizone announced Rob Steele as campaign chair for the Performing Arts Campaign.

“I am excited to lead Dalhousie’s Performing Arts Campaign,” says Rob Steele, president and CEO of Newcap Broadcasting Ltd. “The performing arts are a critical investment for our region. Arts and culture make a city stand out to top talent thinking about what kind of city they want to work and live in.”

Steele is also the founder of Steele Auto Group, the largest and most diversified auto group in Atlantic Canada and one of Canada’s 50 Best Managed Companies. In 2016, he was inducted into the Canadian Broadcast Industry Hall of Fame. He is active in many charitable causes and was named Outstanding Individual Philanthropist of the Year in 2014 by the Nova Scotia Association of Fundraising Professionals for his involvement in and support of various community efforts.

“As a proud Atlantic Canadian, I see the tremendous talent that our region produces – the ECMAs are a showcase for this,” says Steele. “However, to ensure that we have this talent in the future we must invest in the arts.”

The Dalhousie Arts Centre serves more than 150,000 audience members annually and is the home to Symphony Nova Scotia, the Fountain School of Performing Arts and numerous festivals, concerts, competitions and community events. The campaign will set a new standard of excellence in performing arts education at the Fountain School, strengthening the vibrancy of the regional and national cultural scene.

"We are thrilled that Rob has partnered with Dalhousie and will help to propel this campaign forward," says President Florizone. "He is a strong believer in giving back and is passionate about garnering support for the arts and cultural sector in Atlantic Canada.” The project has also been endorsed by over 40 prominent artists, led by Grammy and Juno award winning artist Sarah McLachlan. 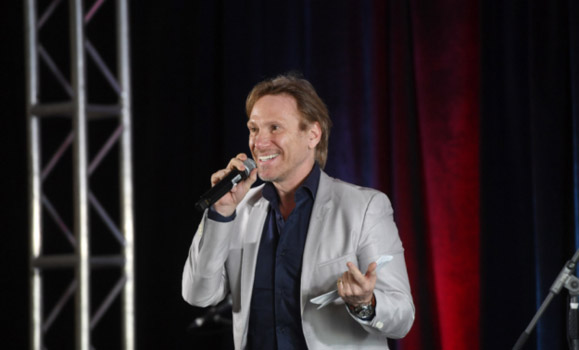 “The Dalhousie Performing Arts Campaign will create facilities that will be an anchor for a more vibrant performing arts scene,” says President Florizone.

The university has seen tremendous success in bringing together government and industry leaders to leverage investments in oceans through the Ocean Frontier Institute, in engineering with the IDEA project, and in entrepreneurship with the Creative Destruction Lab. “Dal also has a role to play in investing, nurturing and expanding the performing arts in our region,” says President Florizone.

The project will see the construction of a new addition to the Dalhousie Arts Centre that includes state-of-the-art performance, practice and rehearsal spaces, as well as new Costume Studies studios. This will create enhanced opportunities for students and a new cultural venue for Halifax. The campaign will also support much-needed enhancements to the 45-year-old Arts Centre's mechanical systems, including environmental upgrades like improved air quality and energy savings gained from updating these internal systems.

At the heart of the campaign is the 300-seat Joseph Strug Concert Hall, made possible by a $5-million gift from Morris Strug.

"The new performance space will be an invaluable resource for not only our students, but the arts community in Nova Scotia," says Jacqueline Warwick, director of the Fountain School of Performing Arts. “The performing arts play a vital role in our cultural and social lives: they provide insight into the experiences of people like us and not like us, they help us understand the past, and they also express our hopes and visions for the future.”

The new concert hall will be equipped with state-of-the-art acoustic design provided by Rick Talaske of the Talaske Group, one of the top acoustics engineers in the field.

Additionally, students will have access to rehearsal and studio spaces similar to ones in professional theatre. The Costume Studies program will be relocated to the new facility, creating new synergies with students from Music, Theatre, Cinema and Media Studies.

"The enhanced facilities will allow us to meet the growing demand for arts curriculum from students across the university and draw more talent to our region," says Dr. Warwick.