Rowe School students have raised over $65,000 in support of youth experiencing homelessness

In March of 2013, when Katie Flanagan and four of her fellow commerce classmates decided to sleep outside for five days, they had a modest goal: raise $5,000 for Phoenix Youth Programs. They came close to their goal, but couldn't have imagined what it would turn into.

Five years later, after participating every year, Katie and several dedicated students have raised over $65,000 in support of youth experiencing homelessness in Halifax.

They've had rain, snow, sun and even a classic Nova Scotian nor'easter this year, but it didn't bother this year's participants much. "There have been worse years for weather," says Katie.

This year, Katie was joined for the five days and nights outside the Rowe Building by Breanna Buhler (participating for her second time), Alexandra Erb and Creston Rudolph, a Phoenix staff member who took vacation days from his job to be there. They were joined by "guest sleepers" who came for one night, including commerce students Julia Penney, Aidan Vaandering, Finn Killam, Donald Eastop, Tiana Vuckovic and the Faculty of Management's dean, Sylvain Charlebois. 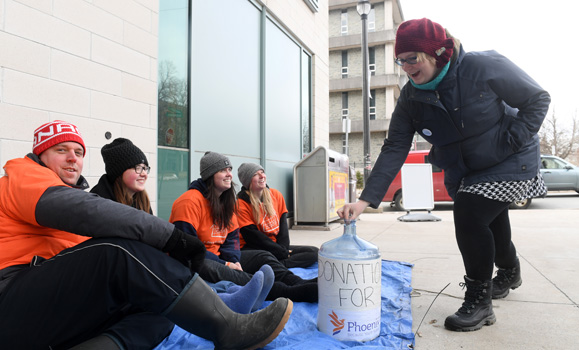 “Their passion and commitment for helping the community is truly contagious, which is why I had to join them as a guest for one night," says Dr. Charlebois. "It was truly one of the best moments of my deanship so far.”

Five Days for the Homeless is a national campaign, and schools across the country participate. Dalhousie is the only university in Atlantic Canada taking part.

Participating students must attend classes as they normally would. All of their meals must be donated by supporters. They can only use cell phones to promote the campaign. They must sleep outside unless inclement weather becomes a safety concern, something that's only happened once at Dalhousie. (They sheltered in the Rowe atrium.)

It's a challenge, but the students believe that it makes the difference in raising awareness.

"People are surprised that we're here the whole time, and that we're not allowed to shower," says Breanna. "It's an all or nothing thing." Seeing how passionate the participants were in her first year at Dal pulled her in. "I thought, 'Let's do the biggest thing I can.'"

On the eve of the campaign's end, the sleepers all agreed that it was "bittersweet" to be wrapping up, even with the prospect of one last wet night ahead of them.

"I don't want it to stop," says Alex. "Seeing the awareness build, the conversations that we're having with people, watching the donations come in… I've had ten hours of sleep over the last four nights, but I've never felt so energized." 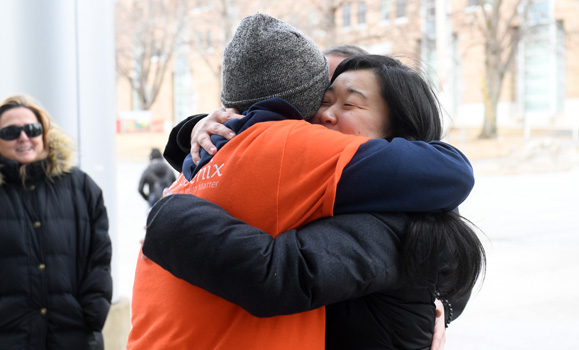 Alex, Katie and Breanna are all graduating this year, but they're excited to see the campaign continue to grow, and may even make an appearance as guest sleepers. "We're definitely going to keep doing it," says Julia, who helped organize this year's campaign and has been elected VP external of the Dalhousie Commerce Society for next year.

"In the grand scheme of things, we aren't giving up a lot, and it's great to see how much we've been able to raise for the excellent work that Phoenix is doing," says Katie. "It's a testament to the students we have here in the Rowe School, and how connected they are to the community. I'm excited to see how the campaign continues to grow in future years."

Donations to the Five Days for the Homeless Dalhousie campaign can be made online until March 31, 2018. The students have raised over $16,700 this year.