One of the projects based at Dalhousie is DAMOS (Development of Autonomous Marine Observation Systems). DAMOS combines autonomous Slocum and Wave Gliders and fixed-tracking stations, providing the ability to make oceanographic and animal tracking measurements with unprecedented resolution in key areas of the Northwest Atlantic.

Among DAMOS’s many benefits, it will help protect the North Atlantic right whales, one of the most endangered cetaceans. 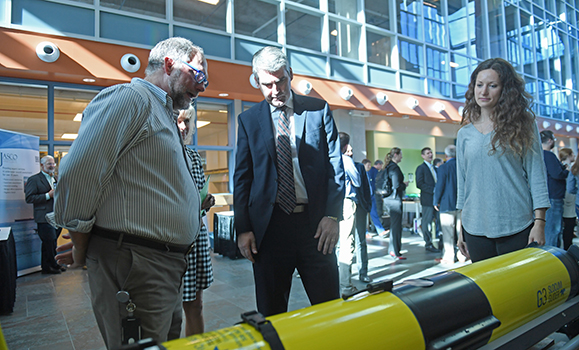 “Through the use of autonomous vehicles and sensors, we’ll be able to strengthen our ability to monitor and locate right whales, identifying their real-time locations,” said Sara Iverson, professor, Department of Biology and Scientific Director of the Ocean Tracking Network which co-leads DAMOS. “Through technology, we’ll also be able to relay that information to the shipping and fishing fleets who share the sea with the right whales, allowing them to chart a course that mitigates conflict with this endangered species.”

Found mostly along the Atlantic Coast, right whales have been threatened by entanglement in fishing gear and collisions with ships. It’s estimated that less than 500 right whales are in existence. This past summer, an unprecedented number of North Atlantic right whale mortalities were reported in the Gulf of St. Lawrence. 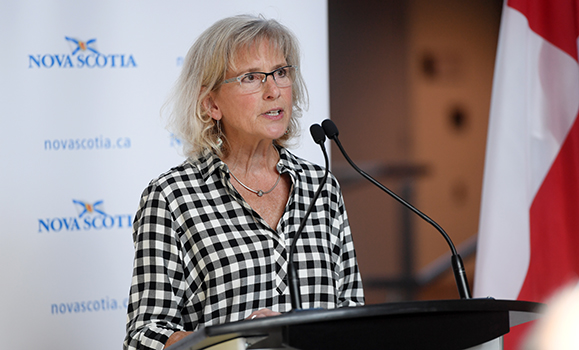 “This project positions Canadian scientists to make major breakthroughs in our understanding of the ocean and its resources,” said Dr. Iverson (above).

“Dalhousie is home to the first and only comprehensive and operational glider team in Canada which is leading the way in ocean observing technologies and training. Additionally, the fixed receiver-tracking systems are made-in-Nova-Scotia-technology, further positioning our province — and Dal — as a world leader in marine research and industry.”

Five other Dal-led projects received funding from the province: 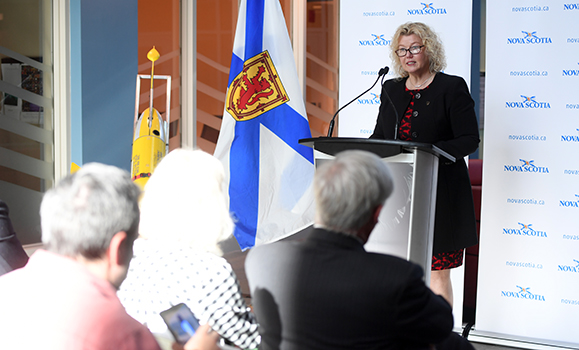 “I am so very proud of our world-class researchers whose incredibly innovative work is generating an unprecedented understanding of our ocean,” says Alice Aiken (above), vice-president research for Dalhousie. “The financial support announced today allows us to increase our capacity for discovery and innovation and offer rich research environments that foster leading-edge work.”

“Nova Scotia has a competitive advantage in the ocean sector and we are supporting research that will have the greatest impact on the province’s economy,” said Premier McNeil.

The funding is expected to create more than 170 jobs and support training for approximately 200 graduate students, interns, lab technicians, project managers and faculty.

Dr. Iverson’s research is also supported by the Ocean Frontier Institute (OFI), an international hub for ocean science led by Dalhousie University, Memorial University of Newfoundland and the University of Prince Edward Island. She is involved in three OFI projects: