The Pride Flag flying over Studley Campus. (Halifax photos by Nick Pearce, Truro photos provided via the Faculty of Agriculture)

On a beautiful sunny Friday in Nova Scotia, the most colourful sights to be found may have been those waving in the summer breeze.

The university was hosting two flag-raising ceremonies — one in Halifax and one in Truro — to mark the start of Dalhousie Pride Week (July 21-30). The week brings together various centres, services, departments, offices and programs on campus and in the community for events focusing on both education and celebration of LGBTQ2SIA+ communities.

Read also: A show of Pride

In Halifax, the flag raising ceremony was presented by the Dalhousie Student Union together with Dalhousie University. 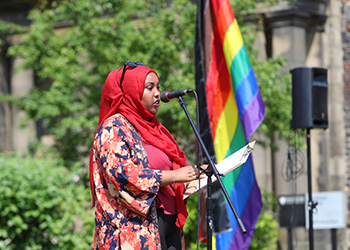 “Pride has been, and always will continue to be, political,” said Amina Abawajy, Dalhousie Student Union president, speaking at the event. “I hope you join me in celebrating the lives and legacies of the queer and trans revolutionaries all year long, and to continue to fight for our queer and trans students every day.”

In addition to the traditional Pride Flag, two other flags were flown in Halifax “to mark the intersecting identities of queer people,” as Abawajy explained. 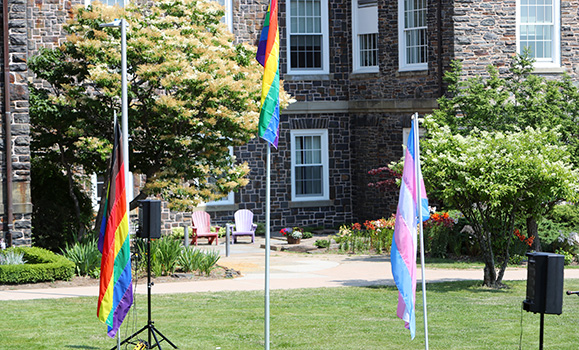 The first was the Transgender Pride flag, which represents the transgender community through two blue stripes, two pink stripes and one white stripe in the middle. The second was a variant of the Pride Flag that included brown and black stripes. Developed in the wake of the Pulse nightclub shooting in Orlando, Florida last year — which targeted racialized trans and queer individuals — the flag represents the racial origins of Pride, including the trans women of colour who sparked the Stonewall riots by challenging police brutality and the criminalization of queer and trans people. 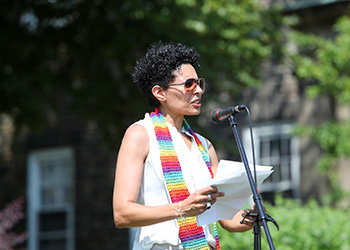 “Today’s flag raising event intends to recognize that we support the meaningful inclusion of LGBTQ+ community members at Dalhousie,” said Arig al Shaibah, vice-provost student affairs, who spoke on behalf of the university at the Halifax ceremony (sharing regards and regrets from President Richard Florizone, who is travelling).

“That we acknowledge multiple intersecting identities within and among LGBTQ+ communities,” continued al Shaibah. “That Black and brown LGBTQ+ people, those who are of Indigenous or Black African ancestry or are otherwise racialized, face a multiplicity of compounding barriers. And that transgender persons and persons with disabilities among LGBTQ+ face disproportionally greater barriers and inequities in education and in society.”

The event also featured a smudging ceremony performed by Dalhousie Elder-in-Residence Billy Lewis, whose remarks emphasized that “it’s the acceptance of differences that makes us one.”

In Truro, members of the Ag Campus community gathered to hoist the Pride Flag at the campus amphitheatre. 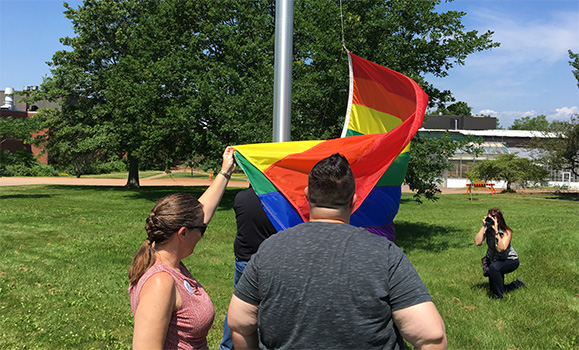 "Inclusivity and diversity is a cornerstone of the Faculty of Agriculture," said Dean David Gray, "and we proudly raise our flag today on the Agricultural Campus in support and recognition of all members of our LGBTQ+ community,”

Both events emphasized the need for Dalhousie, as a community, to continue the important work to ensure all who work and study at the university — including individuals who identify as LGBTQ2SIA+ — feel safe, supported and included.

“It has not been an overstatement to say that developing inclusive, equitable university policies, programs, practices, supports and spaces can be both life-enhancing and life-affirming for LGBTQ+ students and employees,” said al Shiabah at the Halifax ceremony.

“So let us consider Pride Week as a time not only to celebrate and recognize LGBTQ+ people and cultures as part of our community, but to also remind ourselves of the progress we have made as well as the work that still must be done to truly foster a welcoming, positive, inclusive, equitable and safe educational and work environment for LGBTQ+ students and employees.”

The DSU executive poses with the variant of the Pride Flag featuring black and brown stripes.

Celebrating Pride on the Agricultural Campus.