Kayla Beals was just 12 years old when she realized she wanted to work in the health-care sector — and it wasn’t an easy realization.

That’s how old she was when her grandmother, who lived with Kayla’s family in their small house in Eastern Passage, N.S., suffered a major stroke that left her unable to eat normally.

Despite her young age, Kayla stepped up to help out by assisting her mother and the nurses with her grandmother’s feeding tube and medicines. She also accompanied her grandmother on visits to the hospital.

“That experience in being around nurses and doctors and going to the surgeries with her made it concrete that that’s what I wanted to do,” says Kayla. “I wanted to help people like that.”

She began volunteering in nursing homes and hospitals in the community after her grandmother passed away in 2012. And when an opportunity arose to participate in a new health camp for African Nova Scotian youth being launched at Dal in the summer of 2014, she jumped at the chance to take part.

Be the change you want to see

Now, four years later, she’s preparing for a return to campus — only this time as a Medical Sciences student with nearly $50,000 in scholarships and a dream of becoming a medical doctor.

The week-long camp, which has nearly doubled in size to 27 participants this summer from 15 in that first year, offers teens across the province in grades eight through 11 the chance to learn more about the different health professions, where African Nova Scotians are still vastly underrepresented. It includes interactive sessions on everything from nursing and medicine to dentistry and physiotherapy.

“Going through the hospitals, very seldom did I see people who looked like me or came from a background like mine,” says Kayla of her time volunteering in the health sector. “That was a little discouraging, but as I grew up I think I learned that you’ve got to be the change you want to see.”

She says the Dal camp helped her decide that she wanted to focus on becoming a medical doctor (MD) and gave her the knowledge and connections she needed to plot that path.

Eager to set herself up for medical school down the road, Kayla began to look into program options at Dal in high school.  She applied and was accepted into bachelor programs in Nursing and Science, but was waitlisted for her top choice of Medical Sciences — a preparatory undergraduate program of sorts for students looking to eventually move into professional health programs.

Shy a few percentage points of the necessary entrance average for the program due to being in and out of hospital with gastrointestinal disorder throughout grade 12, Kayla hired a tutor and raised her grades until she got in this April.

She shared this and other stories about her own journey toward medicine with this year’s campers during last Friday’s closing ceremony.

In Kayla’s case, that includes potential future hurdles. With years of schooling ahead, she is reluctant to burden her parents with the costs of her schooling or saddle herself with student debt. 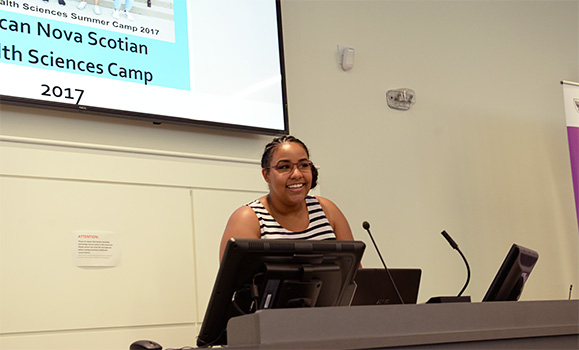 She emphasized the important role Michelle Patrick, program director of Dal’s PLANS (Promoting Leadership in Health for African Nova Scotians) program that the summer camp is part of, has played in guiding her toward the four different scholarships she has since received.

“Michelle has presented me with so many life-changing opportunities since I started high school,” says Kayla. “She has stayed in contact with me, always messaging me with different opportunities.”

It’s that continued contact, guidance and mentorship that can make all the difference when it comes time for those students to start thinking about post-secondary plans and when they eventually arrive.

“We offer mentorship programming with older students and professionals from the community,” explains Patrick, noting that last year PLANS hosted a group mentoring session for Nursing students with registered nurses and nurse practitioners.

She said students like Kayla are also encouraged to joined the Health Association of African Canadians-Student Organization, a student-led group connected to PLANS that aims to bring students together to learn about Black health issues, career development and community engagement.