Dal.ca Home
Home
News & Events
March 2017
27
Coram Boy: A feast for the eyes and a triumph of storytelling

Coram Boy: A feast for the eyes and a triumph of storytelling

In the words of assistant director Marie Raynard, Coram Boy is “epic.” There may be no better way to describe it.

Acclaimed director Linda Moore, well known as former artistic director of Neptune Theatre, laughs while admitting “this play has everything in it.”  Actor Stepheny Hunter’s first comment about the production is that “it’s a big one.”

Based on the novel by Jamila Gavin and adapted for the stage by Helen Edmundson, with music by Adrian Sutton, Coram Boy is a sweeping adventure that takes place over ten years. It analyzes the power of dreams against a background of poverty and privilege in the 18th century, when unscrupulous opportunists bought unwanted children from desperate mothers, promising better lives at an elite orphanage. The rescue of one such child, and the series of events that lead him home again, initiate a journey of self-discovery from mansions to gallows to the wide open sea, as the characters experience love, cruelty, racism, and mental illness.

Daunting, to say the least.

To match the proportions of the story, the Fountain School of Performing Arts pulls out all stops, employing the entire graduating class of 15 actors along with nine third-year actors playing a grand total of 65 characters. The actors are outfitted in a whopping 80 costumes in myriad settings - all on the Sir James Dunn Theatre stage, from March 28th to April 1st.

The design team, cast, and crew rise to the challenge. Hunter praises Moore for ensuring that every character “gets fleshed out”, even in a larg-scale production where background characters could have been easily overshadowed. Kya Mosey plays the role of Melissa as well as the Angel that one character imagines Melissa to be: Mosey comments that Moore “pushed the idea that Melissa is not one-sided” and encouraged her to explore the duality of her character. This attention to individuals is what makes such a fantastical adventure relatable to a modern audience, and the cast of members shine most in their ability to inhabit so many characters in different situations. 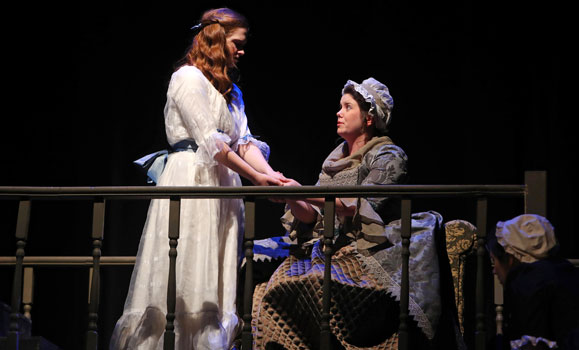 Mrs. Milcote (Stepheny Hunter) reminds her daughter Melissa (Kya Mosey) that both of their futures depend on Melissa’s marrying well.

This production requires actors to be flexible, not only in their characterizations, but in all aspects of performance. Actor Zac Comeau is grateful to be able to draw on all his Acting Program classwork in this graduating piece, incorporating elements such as historical dance, British dialects, and acrobatic feats. Particular congratulations on the latter go to Adrian Choong as Meshak, who spends the majority of the play flinging himself (or being flung) across the stage, and Brandon Liddard as Otis Gardner, whose stage fighting is so intense that the audience cannot help but hold its breath.

A treat for the imagination

With a twisted plot, a plethora of characters, and constant scene hopping, the audience must remain alert in order to follow the story - a challenging but rewarding task for a two and a half hour production. The design, costume, and technical teams have truly outdone themselves to match the proportions of this sweeping epic.

Snezana Pesic, Set and Costume Designer, has transformed the large set into seemingly endless possibilities, ranging from such extremes as an estate to a forest to a cathedral to a ship. As Assistant Set Designer Danielle Wilson says, the set is “Brilliant, it all just moves. One minute you’re somewhere, the next you’re somewhere else”. 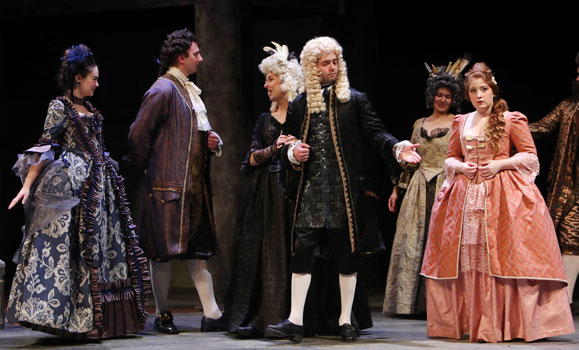 Most striking are the piles of dirt that symbolize grit and reality in this story of hope and triumph over adversity. The lighting and soundscape are also integral in smoothly transitioning from location to location, and keeping the audience engaged in this complicated story.

The power of these contributions has not been lost on the cast. Mosey applauds this production as “unified with the tech program”, citing the opportunities to perform on a complicated set built by students and to explore characters in historically accurate dress created by students. One of the goals of the recently formed Fountain School of Performing Arts was to integrate Dalhousie’s different performing arts programs, and foster collaboration for its students across distinct, but related disciplines. Coram Boy is a strong step in the right direction.

However, these successes cannot be described in mere words, so as Comeau urges, “come see the play!” Actor Kayla Gunn aptly states that it provides a wonderful opportunity to “showcase everyone [so that] everyone can show what they can do”. In doing so, Coram Boy demonstrates the admirable growth of the Fountain School of Performing Arts over its three years of existence, and the production is a feast for the eyes and a triumph of storytelling. 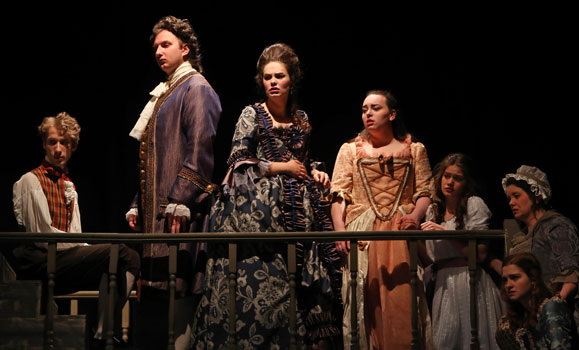