Eyeing a cure for baby blindness

14-year-old Nick Gentleman, who was born with FEVR, looks through a microscope on a lab tour following Tuesday's ACOA announcement. (Danny Abriel photos)

“We’ve got what we think is a very good drug,” says Dr. Chris McMaster, professor and head of the Department of Pharmacology. “It can cure animal models. Now we have to figure out the right dose and ensure its safety before administering it to kids.”

From gene to therapy

When Halifax ophthalmologist Dr. Johane Robitaille and her team discovered the FEVR gene in 2002, it was a major breakthrough that generated international buzz. She found that when the gene is mutated, veins and arteries in the retina aren’t able to develop properly. Identifying this gene allowed scientists to start looking for ways to repair the mutation.

“One of the nice things about discovering the gene is that it tells you, biochemically, what goes wrong,” says Dr. McMaster. “Once you know what goes wrong, you can start hypothesizing what you need to tweak in order to fix the problem, which is the first step in drug discovery.”

“This drug would enable the vessels in the retina to grow and complete their development,” says Dr. Robitaille, a professor in the Department of Ophthalmology & Visual Sciences who specializes in ocular genetics. “We can facilitate that with this therapy, so that we can prevent the FEVR-related complications from happening. It would work directly against the pathology that causes the blindness.”

The research team’s work is funded through a $2 million award from the Atlantic Canada Opportunities Agency, part of a $3 million investment in its work announced on Tuesday, September 13. The money will be used to test toxicity and efficacy of the FEVR drug, and then move it into clinical use.

“It would be a cure”

Currently, there’s no treatment available to address the cause of the disease; doctors can only manage complications.

“We try our best to maintain the vision that people do have,” says Dr. Robitaille. “But FEVR patients have a life-long risk of developing problems that will rob them of the rest of their sight. This drug could protect them for life. They wouldn’t have the constant worry that maybe they’ll lose their vision one day. The drug would treat the cause of the blindness — it would be a cure.”

Dr. Robitaille met 14-year-old Nick Gentleman when he was a baby. He was diagnosed with FEVR early in life, and today his vision is limited. Nick’s little brother, Matthew, also has the disease.

“Matthew and I are very excited about this awesome news,” says Nick. “Dr. Robitaille has been my main doctor for life. I couldn’t ask for better. Every time I would have an eye appointment, my parents would ask Dr. Robitaille, ‘Is any research being done in FEVR?’ Every time, she should would have to say, ‘Sadly, no.’”

Now, Nick says, “she can put a smile on our face.” 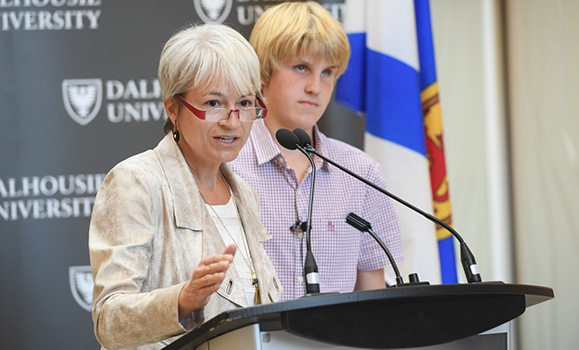 Drs. McMaster and Robitaille expect to be conducting clinical trials within four years. The treatment, if approved, would be given to newborns who screen positive for FEVR.

“The idea is to treat before complications occur. Once the retina pulls away from its normal position, it scars,” explains Dr. Robitaille, who sees patients with the disease in her clinic at the IWK Health Centre. “This drug won’t help with the scar tissue that’s already developed, so that’s why you want to catch symptoms early on; scarring around the retina is what causes the blindness.”

It’s hoped the drug developed by the Dalhousie researchers will also help babies with a condition called retinopathy of prematurity (ROP), which is the number one cause of blindness in the first world and an emerging cause of sightlessness in second-world nations.

When babies are born early, the vasculature in their eyes isn’t completely developed, so they’re at risk of developing ROP.

Because it takes the full gestation for the retina to get its blood supply, a baby’s transition from the womb to the outside world can affect the healthy development of their retinal veins and arteries due to differences in oxygen levels in the two environments.

“When a baby is born prematurely, they’re put into a high oxygen setting. That messes with the signals that allow the retinal vessels to grow normally,” explains Dr. McMaster. “So these babies can end up with the same problem as FEVR babies.”

“ROP looks, from a pathological standpoint, identical in many ways to FEVR,” says Dr. Robitaille. “So theoretically, if the drug we have works for one condition, it should work for the other. This could be a cure for preemies with ROP as well.”

The FEVR drug allows the normal processes of vascular growth in the retina to be active.

“So the veins and arteries in the retina should grow perfectly,” says Dr. Robitaille. “And the treatment would be for a short period of time. Because once the retina’s vessels are developed, they’re developed. If you can get two months’ or so worth of treatment and be good for the rest of your life, that’s a huge step forward.”