Hasan Sinan and Sarath Sasidharan both vividly recall the blend of excitement and anxiety that characterized their first days at Dalhousie. Like most first-year international students, both were making the adjustment to university life while simultaneously trying to get acclimated to a new country and culture.

“The first couple of weeks were a bit rough, of course, but day by day it got better,” says Hasan, a third-year Psychology student who identifies as half-Lebanese and half-Jordanian and came to Dalhousie from Kuwait.

Now thriving members of the campus community, Hasan and Sarath, who is originally from India but has lived much of his life in Dubai, have dedicated themselves to helping incoming international students find their footing at Dalhousie. They are two of the five members of the International Centre’s new Global Connections Welcome Ambassador program, an initiative that aims to ease the cultural and academic transition for students from abroad.

The primary task of the Welcome Ambassadors is a series of four webinars, which have run over the course of the summer. Hosted by the Ambassadors themselves, the webinars covered issues ranging from academics to getting used to life in Nova Scotia.

In the webinars, which also included guest speakers from units such as security and advising, the Ambassadors provided information and answered questions about visas, what to expect from immigration authorities, housing, obtaining mobile phone service, the weather in Nova Scotia, how to buy textbooks and how to choose courses, among many other topics.

“We’re helping people who are as confused as we were at the beginning (of our studies), so they don’t have to go through all of that,” says Hasan. 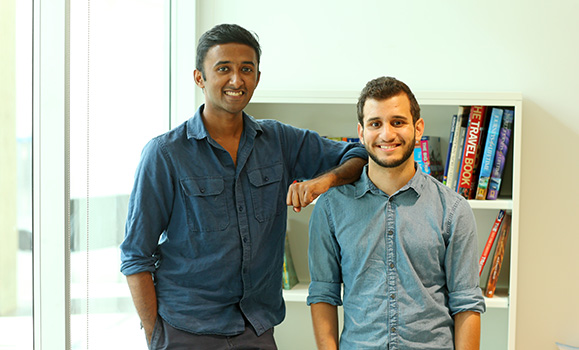 Sarath, a fourth-year Commerce student, agrees, noting that he and his fellow Ambassadors can draw on personal experience when advising new international students.

“It helps to understand what new international students will feel like and address those concerns in the right environment, in the right way.”

Bonding with the community

One of the pieces of advice Sarath has for new students is to get involved in student life on campus. He says that living in residence helped him make friends and served as a “bonding experience,” while additional extracurricular activities made him feel like a part of the community.

“It gave me a perspective on the culture in Canada and helped me meet new friends from around the world,” he says. “

For Hasan, engagement with the community came later in his Dalhousie career, but has been no less rewarding.

“It took me a bit longer to start volunteering, but it changed my whole university experience,” he says.

Hasan and Sarath will continue to be active as Welcome Ambassadors, even though the webinar series is complete. Hasan will meet new students at Dalhousie’s International Orientation on August 30, while Sarath will be doing the same for international students at the Faculty of Management.

Both will also be volunteering at the International Centre’s Welcome Desk, answering questions from incoming students and their families.

According to Hasan, helping new international students make a happy and successful transition to life at Dalhousie is a reflection of how giving back has strengthened his own ties to university and country where he studies.

“It’s a chance to contribute and feel like an active member of the community.”