As is always the case, the Fountain School of Performing Arts is bringing its theatre season to a close with a bang — and a wild one at that.

The Green Bird, Carlo Gozzi’s 1765 fantasy, tells the tale of two lost orphans and an evil queen mother. Setting the story inside of a Cuban Havana Club, Dal’s fourth-year students bring to life an oft-bizarre story that has all the drama of a soap opera with comic relief that has your typical audience bowling over in laughter. 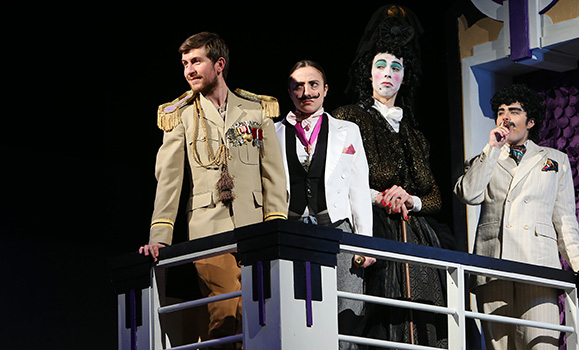 Director Margot Dionne took a huge creative leap moving the 18th-century commedia to a Havana nightclub, but as she states in her director’s notes, “Gozzi’s spectacle (or what he called his, ‘scenic monster’) would surely find a natural home [there].” She goes on to describe the parallel expressions of the two time periods and the advantages to the culturally rich music and environment that lends itself to the story.

The music takes impassioned inspiration from what musical director Chris Mitchell describes as, “the bright and colourful Cuban culture.” Along with a group of musicians from the Fountain School, Mitchell’s score truly brings the scene to life with horns and keys swirling around the stage. Mitchell himself even occasionally steps onto the stage for fantastic moments of comedy. 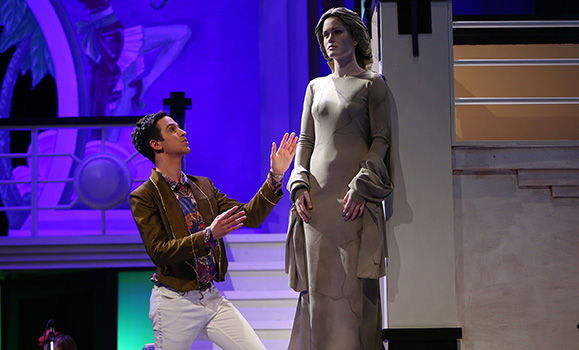 At Tuesday night’s opening performance, student Frietzen Kenter brought down the house with a sidesplitting performance in the role of Truffaidino. Her physical comedy is unbeatable, and she breaks up every serious moment with the perfect influx of boisterous hilarity. Similarly, Peter Sarty did an outstanding job of the timing and inflection in the jaw-dropping role of Tartagliona.

The cast as a whole is engaging and blends well, creating a sense of over-the-top drama and hilarity. With fabulous costumes and an inventive set, the work of everyone involved in this show is all there on the stage, and the commitment of students in both Theatre and Music within the Fountain School of Performing Arts is evident in every scene and note. 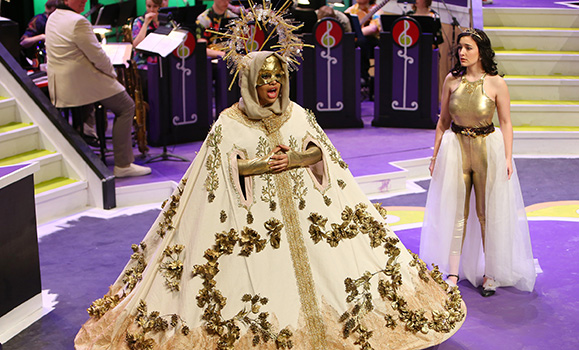 Anyone who has the chance ought to take some time out of their busy week to laugh until they cry and have their hearts warmed at The Green Bird. The production runs through Saturday, April 2 in the Dalhousie Arts Centre's Dunn Theatre, with 7:30 p.m. shows nightly and a 2 p.m. Saturday matinee. Tickets are available at the Dalhousie Arts Centre Box Office.