It was a packed house in Dalhousie’s Rowe Building Monday afternoon as students, community members and others filled the seats to hear from and speak with Canada’s minister of finance.

The Honourable Bill Morneau was on campus for a one-hour event as part of the government’s nationwide pre-budget consultations. Throughout January, the minister is leading a series of events across the country, soliciting feedback and ideas from Canadians for the 2016 federal budget.

“I’m here, really, to listen to you,” said Morneau. “We’re trying to get a sense from Canadians about what priorities we can reflect in our budget.” 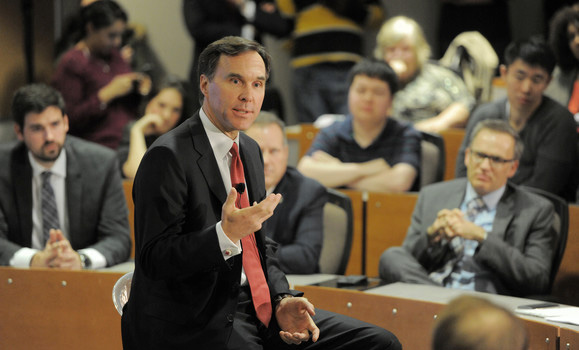 The event was one of two such consultations to be broadcast live on Facebook, with questions both from those in the room and online. The second Facebook event will be held on Friday, January 15 from the University of Calgary.

Monday’s event was moderated by Andy Fillmore, member of parliament for Halifax and Dal alumnus (BEDS’90, MURP’92). Several other Nova Scotian members of parliament were also in attendance, including Treasury Board President Scott Brison (BComm’89).

The finance minister fielded questions and comments on a wide variety of topics including corporate tax rates, CPP contributions, access to postsecondary education, the housing market and defence spending. A common theme to the minister’s remarks was the need to prioritize investments that enable economic growth.

“Our job is to grow the economy, to create the next jobs for the people in this room,” said Morneau. “And we believe this will come from investments that will grow the economy.” 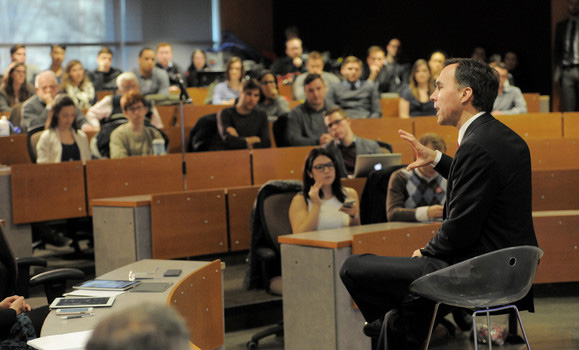 Learn how you can contribute to the pre-budget consultations at the Government of Canada’s website.