A bottle of Alexander Keith’s beer has been keeping Dal Engineering prof Andrew MacIntosh busy at work this week.

Don’t worry: it’s all on the up-and-up. Dr. MacIntosh, from the Department of Process Engineering and Applied Science, has been answering media calls from around the world after helping test a long-lost bottle of Alexander Keith’s beer discovered at the bottom of Halifax’s Northwest Arm this fall. The unopened bottle dates back to the 1800s.

“It was far more attention than I expected” says Dr. MacIntosh. “For some reason this is a story that has really taken off. We’ve been in contact with Canadian Press, this morning we chatted with Global News on their breakfast show and [the Discovery Channel TV show] Daily Planet will be airing their segment [in an upcoming episode].”

The Daily Planet visit, which happened while the tests were taking place, was particularly exciting for Dr. MacIntosh, as he grew up watching the show when it used to be called Discovery CA. “It was quite a pleasure to move from them inspiring me as a kid to working with them now.”

Amateur scuba diver John Crouse found the bottle in late November last year, near the Northwest Arm’s Dingle, buried in the mud under several meters of water. The bottle’s markings suggest it dates sometime between 1872 and 1890, with ink preserved on the cork indicating it as a product of “A. Keith’s Brewers.” 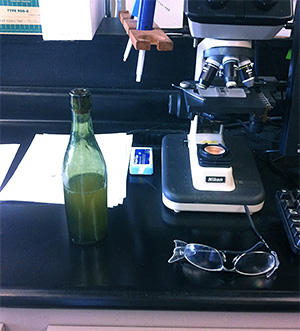 The discovery was covered in local news outlets, which is where Dr. MacIntosh heard about it. “I thought to myself that it would be a fun opportunity to test that,” he recalls.

Another person who noticed the news coverage was Christopher Reynolds of Halifax’s Stillwell Beer Bar. He approached Crouse and, together, decided to get the bottle’s contents tested.

“They contacted Propeller [Brewery],” says Dr. MacIntosh, “and their QA manager Jessica Forbes is a former student of ours: she went through our Food Science program, and she completed research in the brewing field under Dr. Alex Speers. So she was familiar with the lab and what we are capable of doing so she pointed Chris in our direction.”

“I specifically study fermentation which takes many forms,” he explains. “[There’s] pharmaceutical fermentation, when you are trying to create an antibiotic. We do bio algae fermentation to try to make biofuels and, of course, production of food products such as beers, ciders and eventually spirits.” Dr. MacIntosh says the department does “a lot of work with the local brewing market to try and advance their technology” and that their connections to the Canadian Institute of Fermentation Technology (CIFT) help make that happen. 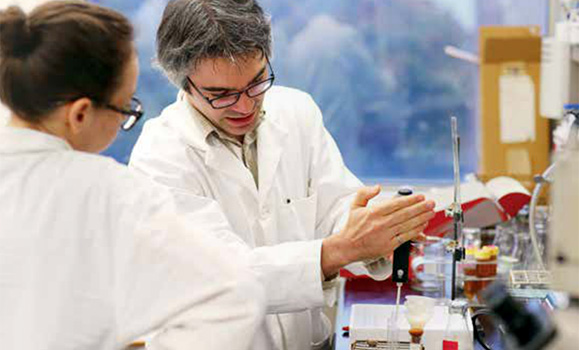 Dr. MacIntosh teaches a class called Advanced Brewing Science, which is mostly taken as an elective for Chemical Engineering students. It’s a class that’s well-aligned with the rising popularity of craft brewing.

“The students coming into that course are now more educated than they have been previously about the many different styles, the many different techniques that are used in brewing and that has helped to offer a much more involved course,” says Dr. MacIntosh. “It’s really a fun course to teach.”

Many of the students are able to take what they’ve learned into careers in brewing. Dr. MacIntosh says he knows of students working at Olands, Propeller, a brewery in England and one student at a brewing research station in the United States.

“It’s quite exciting to maintain connections with students who proceed into this field and see how it’s being done elsewhere in the world. One of our professors, Alex Spears, is on leave from Dalhousie but he’s now acting as the chair of the Institute of Brewing and Distilling in Scotland. So we’re really able to collaborate with people all around the world.”

Dr. MacIntosh is looking forward to the science that will come from testing the contents of the discovered bottle.

“All of the chemicals that make up the beer, whether it’s skunky or buttery, all of those have a peculiar chemical that contributes to that flavor. We can identify those, quantify those and it will give us some clues about the raw materials that were used in the production of that beer. They are set up to do that in Scotland with Dr. Speers, so we’ve taken a sample that we’ll be sending to him that’s leaving tomorrow [Friday] and between our two analyses we’ll be able to paint a complete picture of that beer which we plan to publish.”

Which begs the question: did Dr. MacIntosh get the chance to taste the 130-year-old brew?

“At the end [of the testing] we had a couple of millilitres left that couldn’t go back into the bottle. It tasted terrible. Beer does not age like wine. Don’t go drinking random bottles you find in the harbour.”