To accurately observe the sun and help solve one of the biggest puzzles in modern physics, Arthur McDonald had to go two kilometres underground, deep into an active nickel mine beneath Sudbury, Ont.

Now, nearly 15 years after his major discovery in that mine, the Dalhousie alumnus and Queen’s University professor has received one of the highest scientific honours on the planet.

For his contributions to our understanding of neutrinos — tiny subatomic particles that are one of the fundamental building blocks of the universe — Dr. McDonald is co-recipient of the 2015 Nobel Prize in Physics, together with Takaaki Kajita of the University of Tokyo. The announcement was made Tuesday morning by the The Royal Swedish Academy of Sciences.

Changing the way we think about matter

Dr. McDonald’s Nobel-recognized research demonstrated that neutrinos change their identities — or oscillate — on their way to Earth from the sun, a discovery that gave credence to theories that the particles could have a mass greater than zero. Previous experiments had suggested that possibility, but prior to Dr. McDonald no scientist had never been able to learn enough about the properties of neutrinos to illustrate that.

By burying a detector ten-storeys tall thousands of metres under the earth in an area with low levels of radioactivity, Dr. McDonald and his research team were able to register readings from other kinds of neutrinos, thereby confirming that they do change from one type to the other.

“It’s ironic that in order to observe the sun, you have to go two kilometres underground,” the 72 -year-old scientist told a representative from the Nobel Prize’s media team in an interview Tuesday. “It’s not what you would expect, that that’s the best place to look into the core of the sun, but low and behold it is.”

Dr. McDonald’s findings on neutrino oscillation, first published in late-2001 and mid-2002, were heralded as a breakthrough discovery. According to one scientific journal at the time, it provided the first evidence that the “Standard Model” of particle physics was potentially incomplete. Since then, the discovery has helped to recast the fundamental scientific understandings of how matter works.

For his research, Dr. McDonald has received many of the top scientific honours in Canada and beyond, including a Killam Prize in the Natural Sciences, the Herzberg Canada Gold Medal for Science and Engineering, and the Order of Canada

Dr. McDonald’s interest in a career in science was evident from his earliest days at Dalhousie: not only did he receive the Governor General’s Gold Medal, but his write-up in the Class of 1965 yearbook left little doubt about his next move: “Future Intentions: Ph.D. in Physics.” 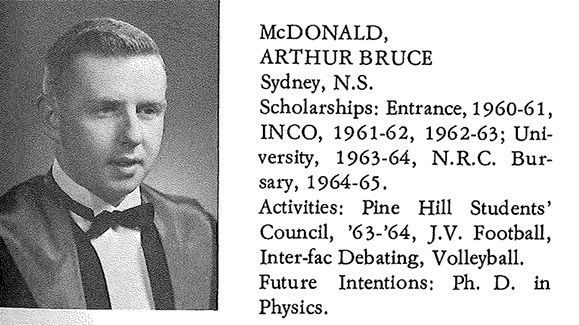 True to his word, the budding scientist pursued and completed his doctoral work in physics at the California Institute of Technology in Pasadena. He worked as a postdoctoral fellow and then researcher at the Chalk River nuclear facility outside of Ottawa before joining the faculty at Princeton University in 1982.

Seven years later, he returned to Canada and joined Queen’s University as a professor and director of a research group at the Sudbury Neutrino Observatory (SNO), where the groundbreaking neutrino experiments were completed.

Ian Hill, Dal physicist and currently acting dean of the Faculty of Science, first met Dr. McDonald in 1992 when he took on an undergraduate thesis project related to the Sudbury facility, which was still under construction at the time.

Dr. Hill later crossed paths with Dr. McDonald as a graduate student, when he took a course on nuclear physics taught by the prof. “Art was an excellent teacher,” remembers Dr. Hill, who said he also bonded with the professor because they both had Nova Scotia roots.

From Dal to discovery

Dr. McDonald has had several occasions to return to Nova Scotia — and to Dal — over the years. In addition to his 1997 honorary degree, he came back to campus on October 7, 2005 (10 years ago, to the day, from yesterday’s Nobel announcement) to deliver the prestigious 2005 E.W. Guptill Memorial Lecture, hosted by Dalhousie's Department of Physics and Atmospheric Sciences. McDonald is now the 14th Nobel laureate to have delivered the lecture, whose namsake — the late Ernest Guptill, former department chair — was also one of Dr. McDonald's many mentors.

Manfred Jericho, professor emeritus of physics at Dal, remembers the physicist’s earlier days on campus. Dr. Jericho joined the faculty at Dal in 1965, the same year the nascent scientist was beginning his master’s degree. Dr. Jericho remembers being taken aside by the then-chair of the Physics department and being told that they had a particularly brilliant crop of students that year.

Dr. Jericho taught the younger McDonald in a graduate course and says it was obvious to him at the time the student would rise to “great heights in Canadian society.”

Flipping through Dr. McDonald’s master’s thesis Tuesday after news of the award, Dr. Jericho noticed that if you wanted to do important graduate research in those days you had to build your own equipment.

“He had to build and design all kinds of electronics from scratch,” said Dr. Jericho.  “It’s quite clear that that training helped a lot in getting him going on his future career.”