We live in restless times. Our thoughts flitter (and, in some cases, Twitter) throughout the day in rapid-fire succession. With the world at our fingertips, our patience with media has never seemed more fleeting and our thirst for information and connection never less satiated. New graduates leave campus prepared to navigate a complex world, one rife with opportunities to pique their curiosity and test their problem-solving skills.

Career academics share that curiosity, and certainly the taste for problem solving, but what sets them apart is the ability and patience to focus: to channel their curiosity and problem-solving skills to produce insights and discoveries that can, quite literally, change the world as we know it.

Take, for example, Axel Becke. He isn’t a household name — unless you live in a household of chemists, that is. But over a career spanning 30-plus years, the Dalhousie professor has become one of the most influential researchers in the world. And he’s done so focused almost entirely on a single problem in quantum theory.

Admittedly, it’s one heck of a problem. For his entire career, Dr. Becke has been working on models and approximations for an incalculable energy term within what’s known as the “density-functional” theory of electronic structure: a faster, more intuitive way of calculating the properties of chemical systems and materials. The theory began to gain traction in the 1970s and 1980s, when Dr. Becke was completing his master’s and doctoral studies.

“We were like a band of outsiders, working on a new theory for the sake of fundamental understanding,” says Dr. Becke. “Now, it’s used in over 80 per cent of electronic structure calculations in chemistry.”

And that’s thanks, in no small part, to Dr. Becke’s research. Today, whether you’re a drug researcher trying to improve people’s health or a chemist working to create a better solar panel, you’re probably using chemistry software employing Dr. Becke’s ideas and formulas. In many cases, you may be pressing a button that even has his name or initials on it in a commercial program — and citing his publications in your own papers, adding to the more than 100,000 academic publications so far that reference Dr. Becke’s research. Last year, the scientific journal Nature ranked two of Dr. Becke’s articles in the top 25 most-cited academic papers of all time, across all disciplines — both of them solo publications. One is in the top ten.

“My colleagues, even those who are not theoreticians, tell me, ‘everyone knows your name. You’re famous,’” he laughs. 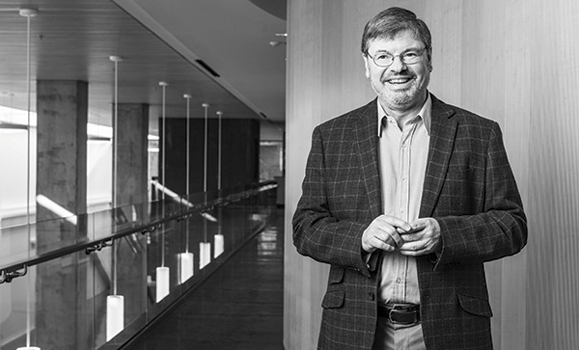 Dr. Becke certainly isn’t the type to seek out fame. In fact, he’s not much for the spotlight at all. Earlier this year, when it was announced he was receiving the Natural Sciences and Engineering Research Council of Canada’s Gerhard Herzberg Gold Medal — perhaps our country’s highest award for scientific research — he participated in only a handful of media interviews, preferring to leave much of the talking to his peers.

“He’d rather be back in Halifax, sitting at his desk and thinking about the big problem,” said Russell Boyd, Chemistry professor emeritus at Dalhousie and professional mentor to Dr. Becke, speaking to the Halifax Chronicle Herald about his colleague’s accomplishments.

Still, Dr. Becke did take a break from his work to travel to Ottawa in mid-February so the Governor General could present him with the Herzberg Medal at a Rideau Hall ceremony. It marked the second time in two years a Dalhousie professor made the trip; molecular biologist Ford Doolittle was the 2013 recipient of the award. The medal celebrates sustained career excellence and influence in research. Dr. Doolittle was the first researcher from Atlantic Canada to receive the award, making Dal’s back-to-back honourees even more exceptional.

For Dr. Becke, the prize both celebrates his impressive career as it heads to a close and serves as welcome recognition from the funding agency that has made his research possible.

“It’s such a huge honour,” he says. “And it’s been granted to me by the funding agency that’s supported me throughout my career, beginning with my graduate studies. So that’s really special.”

Dr. Becke is no stranger to awards and honours. He’s held a Canada Council Killam Research Fellowship. He’s a fellow of both the Royal Society of Canada and the Royal Society of London. He’s received medals from the International Academy of Quantum Molecular Science and the World Association of Theoretical and Computational Chemists. He was the first Canadian ever to receive the Theoretical Chemistry Award of the American Chemical Society. This June, he’ll receive the Chemical Institute of Canada Medal, the country’s highest chemistry prize.

Not a bad haul for a career focused on a single problem.

A journey to chemistry

Dr. Becke’s scientific path began in his childhood. His parents encouraged a love of the sciences from a very early age; his father was a scientific glassblower, crafting chemical glassware for McMaster University and solid-state-chip manufacturing glassware for Nortel Networks.

“They would buy me chemistry kits, electronics kits, science books for Christmas,” Dr. Becke says of his parents. “I had the LEGO and Meccano sets and everything else.”

His journey to theoretical chemistry in particular was a long and winding one. His bachelor’s degree was in engineering physics, but he found he was more interested in where the formulas came from than in applying them. That led to graduate work in nuclear theory, where he was somewhat frustrated by the lack of useful predictive power.

“In nuclear physics the forces between neutrons and protons in nuclei are quite complex and difficult to work with,” he explains, “but the forces between electrons in atoms, molecules and in all materials are simple. So I liked that there was the potential to actually compute good numbers and make accurate predictions in quantum chemistry.”

Or so he thought. It turned out that the methods used at the time to compute molecular structures and chemical reaction energies were incredibly cumbersome: slow, complicated and requiring a great deal of effort to accurately calculate something as simple as a molecular bond energy — the most basic of chemical concepts. Dr. Becke believed there was a simpler way and he found it in density-functional theory (DFT), an approach to electronic structure conceived by theoretical physicist Walter Kohn in the 1960s. (In 1998, Kohn would receive the Nobel Prize in Chemistry, together with John Pople, for his work on the theory.) In contrast to the traditional, older, non-DFT approaches, DFT was beautifully simple and intuitive.

There was one big problem, though — and for Dr. Becke it would become the problem, the one he’d spend his entire career working on.

When Dr. Kohn developed DFT, he identified an energy term — dubbed the “exchange-correlation energy” — in which nearly all of the chemical effects are hidden. No exact expression exists for it; try as they might, scientists will never be able to calculate it exactly. The best they can do is find approximations for it, hopefully better and better ones, but in the early 1980s the approximations weren’t good enough for chemists to use.

“It’s the holy grail of density-functional theory,” says Dr. Becke of the exchange-correlation energy. “We can’t determine it exactly, but we know it’s there thanks to Walter Kohn, so we have to model it, discover as much as we can about it, however we can. And doing so is challenging and interesting, involving a mix of mathematical and intuitive strategies.”

Thus he began putting pencil to paper… then paper into computer code… then code into testing… then reviewing, recalibrating, repeating, each time trying to improve the accuracy of his exchange-correlation approximations. Then, in the late 1980s and early 1990s, while he was a faculty member at Queen’s University, came the breakthroughs: new exchange-correlation functional forms that improved the accuracy of DFT calculations by a factor of about 50. Within 10 years, Dr. Becke’s methods were included in most computational chemistry software packages in the world, and the rest is history.

History, yes; ancient history, hardly. Dr. Becke’s work continues, now as the Killam Chair in Computational Science at Dalhousie, a position he’s held since 2006. Thirty years after he began his quest to find better and better exchange correlation functionals, he’s still working on it — and succeeding at it — expanding DFT’s applicability throughout chemistry and physics.

“The number of problems that cannot be handled by DFT is getting smaller and smaller, but there are still corners of computational chemistry where DFT doesn’t work,” he explains. “So we’re trying to flesh out all the problematic corners. Bit-by-bit we are expanding the theory to cover all of chemistry.”

One of those recent breakthroughs came in the mid-2000s when, with the help of graduate student Erin Johnson, he developed formulas that allowed DFT to be used for dispersion or van der Waals forces. Although the weakest forces in chemistry, van der Waals forces are nonetheless crucial in biological chemistry. The double helix structure of DNA, for example, is governed by van der Waals interactions. Their inclusion within DFT opens up the theory to much wider applications in biological chemistry and beyond.

Now, a decade later, Drs. Becke and Johnson will be working together again. Dr. Becke is using part of the $1 million research grant that comes with the Herzberg Medal to fund a new research chair at Dalhousie, the Herzberg-Becke Chair in Theoretical Chemistry, to be held by Dr. Johnson — whom Dr. Becke considers “one of the best young theorists in the world”.

“Axel has incredible intuition regarding theoretical chemistry that has helped make him one of the world’s most eminent researchers,” says Dr. Johnson. “Having Axel as an advisor, friend and mentor is a pleasure and an honour.”

Though he’s nearing the end of his career, Dr. Becke is working as hard as ever: still putting pencil to paper, still working on and with his own computer code, still testing his functionals and tweaking them to try and get closer and closer to that DFT holy grail. The ultimate goal, he says, would be a universal density-functional theory, one that could work for all types of chemical problems. Maybe he’ll find it; maybe it’ll be Dr. Johnson who eventually succeeds. But Dr. Becke says it’s his focus on that singular problem that has allowed him to move the field of computational chemistry so much closer to that goalpost.

“I’ve been working on the same problem for 30 years and I’m proud of that,” he says. “Some people’s careers are a collection of diverse projects. My career is focused on one goal. One of the qualities you need to really influence a field is perseverance — and I’ve had 30 years of perseverance on basically the same problem.

“We’re getting there. I can see the light at the end of the tunnel, but there’s still more work to do.”

This article first appeared in the Spring 2015 edition of Dalhousie magazine.