Planning student Peter Nightingale who, together with fellow student Jeremy Banks, is behind the colourful pianos. (Bruce Bottomley photos)

Every piano needs a player — and around Halifax this summer, several colourful pianos are waiting for you to tickle their ivories.

You may have already seen the pianos around town: on the waterfront, on Barrington Street and in Cornwallis Park. Dubbed “#PlayMeHFX,” the pianos are the brainchild of Dalhousie Planning students Peter Nightingale and Jeremy Banks.

Peter says the first spark of inspiration for the idea was the piano in the Woodside Terminal in Dartmouth, which he passes through each day on his commute to Dal. “Montreal and London have also done similar projects and after doing research and contacting other cities it just seemed like a really great fit for Halifax,” he says.

Jeremy says the project came together quickly. “We first started talking to partners in March,” he explains. “In April we had more firm conversations around it. As far as public parks and beautification goes, it’s been pretty lightning speed.” 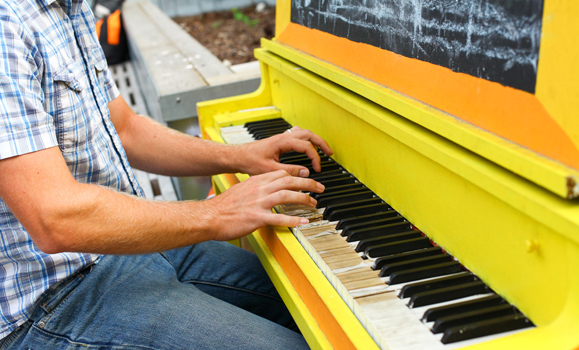 Thus far, Haligonias seems to have really taken to the pianos, even going so far as to take it upon themselves to cover them up with tarps in bad weather. That trust was one of the challenges the two students saw in putting the program together. Another was the time commitment.

“The project is really fun and we’re so proud of it but we both have day jobs,” says Peter. “It takes a lot of time to organise, paint and install pianos. It’s become almost a fulltime commitment.”

Don’t worry though: the students won’t be shying away from the project or shutting it down any time soon. Instead they say they’re looking at how it can continue in the future.

“Our partnership with the waterfront is great, as they manage waterfronts all over the province,” says Peter. “That would be a great way to expand. Now that the project is out there we also have a lot of people wanting to donate time, resources, and even pianos, which helps a lot.”

So next time you’re on the waterfront make sure to look out for #PlayMeHfx, why not hit up a tune?