Last fall, Dal President Richard Florizone addressed the Halifax Chamber of Commerce, speaking about Dal's role in the local and regional economy. The speech's key theme was based around three broad areas, the focus points of Dal's emerging strategy to contribute to the region's economy: student recruitment and retention, entrepreneurship and co-op education, and developing economic clusters around Dal's research strengths.

Last week President Florzione brought that same message to the community that hosts Dal's Agricultural Campus. Dr. Florizone was the keynote speaker at the 125th annual general meeting of the Truro and Colchester Chamber of Commerce — a meeting held, conveniently, on the Ag Campus itself.

The chamber represents 450 business owners and operators in the Truro and surrounding area.

The event reflected the growing partnership between Dalhousie and the Chamber through the Rowe School of Business Connect program, focused on fostering work experiences and co-op partnerships between Dalhousie graduates and students and individual business owners in Truro and Colchester County.

Dr. Florizone was in town to speak to the Chamber on partnership opportunities and the value of working together. “There is enormous potential within Dalhousie University and within the region, and we need to look for ways to tap into that potential,” explained Dr. Florizone.

Expanding that potential has been central to Dalhousie's increased role in Truro. President Florizone described how the integration of the Truro-Bible Hill campus into Dalhousie nearly three years ago has offered clear benefits both to the community and to the university.

“The merger made Dalhousie the only university in Atlantic Canada to offer a specialty in agriculture science, combining the experience of one of the oldest universities in Canada with the experience of one of the oldest centres for agricultural education and research in Canada,” he explained. “Working together, we've been able to expand course offerings, research opportunities and launch new programs, all developments that attract more local, national and international students and faculty to Truro-Bible Hill and contribute to the vitality and health of the region.”

Across Dalhousie, more than half of the university's students come from out-of-province, more than any other major research university in the country. Many grads stay, but more would stay if there were more opportunities. 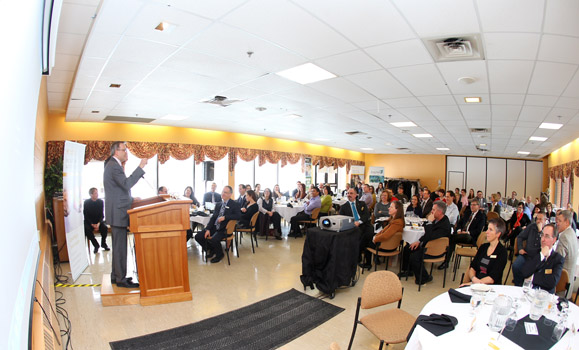 That's where entrepreneurship and co-op education come into play: “Where we can provide more of our students with the skills they want and need to build companies, to be among the most employable graduates and to find new and better ways to tackle the world's most complex problems,” explained Dr. Florizone.

On the entrepreneurship front the university is making strides. The Truro innovation sandbox, named Cultiv8, opened in January under the leadership of coordinator Jolene MacEachern and is a collaboration between Dal and Acadia Universities. Cultiv8 will allow for stronger connections to the regional economy and will create partnerships with many different industries.

And with the support of Dal's Industry Liaison and Innovation office, and with various industry partners and networks with Springboard Atlantic, university research is supporting the growth of new businesses and strengthening existing ones.

Dr. Florizone described several great examples of how Dalhousie's unique expertise has contributed to economic development in the region.

Ongoing research in the wild blueberry sector has improved yields and developed new technology, supporting the growth of many businesses in the sector including that well-known Oxford Frozen Foods. LaHave Forests, a startup in New Germany, is developing health-enhancing products from the haskap berry, supported by research and product development coming from the lab of Vasantha Rupasinghe. Acadian Seaplants, a world leader in marine bio-product development, relies on the work of Balakrishnan Prithiviraj and Derek Anderson, among others, to provide scientific evidence to support sales of their plant and animal growth products in 70 countries around the world.

Kenny Corscadden has worked with Thermo-Cell Industries in Debert Industrial Park on using wool as an addition to their existing paper fibre-based insulation. And Caroline Morissette from Halifax has been working with Tandus Manufacturing Plant in the Truro Industrial Park on a waste carpet utilization project.

Other faculty from Dal's Faculty of Agriculture are exploring opportunities to work with Truro industries and manufacturers in improving their processes and products.

“We all have a role to play in unleashing our potential in this region,” Dr. Florizone concluded. “And it's only by working together that we'll become strong. That's the only way we'll build a stronger Dal, a stronger post-secondary system, a stronger economy and a stronger Nova Scotia — one Nova Scotia, together.”