It's getting hotter: What do we do about it?

Australian grazier Gary Johnson mourns the loss of tree cover on his property as a result of previous grazing pressure. He has switched to high-intensity, short-duration rotational grazing which will improve his tree cover as well as his farm's adaptability to climate change. (Kate Sherren photo)

This article was first published in the Summer 2013 edition of Dalhousie magazine.

On a cold evening in Nome, Alaska – located just below the Arctic Circle – half the town’s 3,600 people crowd together indoors to meet Dalhousie Earth Sciences researcher Lawrence Plug. It’s a big turn-out for a science lecture, but then Dr. Plug’s topic is of great concern in the north: the thaw of permafrost around lakes resulting from climate change.

Dr. Plug studies terrestrial parts of northern Canada, Alaska and Siberia. “The lakes grow by the thawing of permafrost and rotten material thaws with it, releasing methane, which is a very potent greenhouse gas,” he says.

It’s a nasty equation: the climate change humans have already created is warming and thawing the permafrost, and as the permafrost melts and releases methane, global warming is worsened. Dr. Plug’s research asks, given certain changes in climate, how much faster will lakes grow? How much methane will be released? His frequent research trips yield data that is entered into computer models predicting how the land and lakes might change under various climate scenarios.

The future of northern communities like Nome lies in the balance. Thawing permafrost threatens sewage, bridge, road and crucial runway infrastructure, adding billions of dollars to maintenance and building costs. Increasing storm activity will hit coastal towns like Nome as well. For Dr. Plug, meeting with northern residents is a two-way street. “They know the land and remember significant lake events of the past to within a year or two – like lakes that have drained,” Dr. Plug says. “Oral histories give us specific examples to round out the overall trends we’re observing.”

The oral histories, data and models feed into the global system of understanding climate change, getting a handle on its severity and many impacts, and figuring out what to do about it.

Dr. Plug isn’t the only Dalhousie University professor contributing to our understanding of – and planning for – climate change. From northern permafrost to the world’s oceans, from farmers’ fields to legislators’ offices, Dal researchers are contributing to the knowledge base and policy decisions that will affect how well we cope with our changing environment and mitigate the effects we’ve already set in motion.

The research is clear: weather patterns are changing in Canada and globally. In recent years, dozens of countries have experienced some of their worst natural disasters – from extended heat waves and drought to severe flooding. It is impossible to peg any one weather event on climate change, but it is the most likely culprit in their overall increased frequency and severity.

Those who work closest to the land see those changes firsthand. Professor Kate Sherren of the School for Resource and Environmental Studies and the College of Sustainability was doing her post-doc with Australian farmers amidst that country’s 10-year drought when she started seriously working on climate issues. When she started at Dalhousie – not far from her New Brunswick origins – two years ago, it was an ecosystem shock.

“Here the problem is too much water rather than drought,” she says.

For hundreds of years, Maritime farmers have removed wetlands to create more arable farmland. But without those wetlands, rainwater runs off rather than being absorbed and, with more frequent and severe rainstorms, flooding and erosion become bigger problems. Re-establishing the wetlands is part of the solution because a more diverse landscape is a more resilient one in the face of changing weather patterns.

Dr. Sherren has taken a collaborative approach, bringing in funding from the Department of Natural Resources, Ducks Unlimited and Agriculture, Agri-Food Canada and the Sage Environmental Program, with the Nature Conservancy acting as advisor. The funding has allowed Master of Environmental Studies student Kate Goodale to survey farmers on their feelings about creating habitat to encourage wildlife – another key factor in climate change resilience. The research will be used to develop educational materials for farmers, including a phone app for habitat planning. 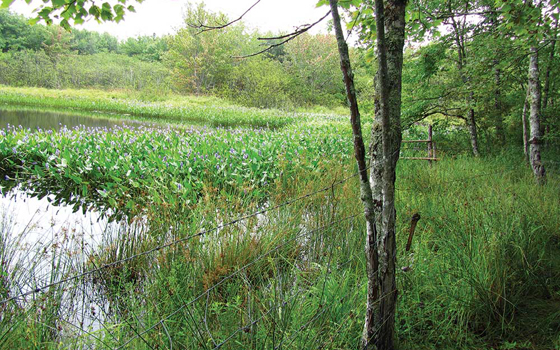 In addition to bolstering the resilience of their farms to climate change, farmers have a significant role to play in preventing the phenomenon. “Agriculture produces 70 per cent of nitrous oxide emissions globally and in Canada,” says David Burton of Dalhousie’s Faculty of Agriculture. Nitrous oxide is one of three greenhouse gases contributing to climate change. Dr. Burton is working closely with federal and provincial departments of agriculture in the region to study methods of applying animal manure and other fertilizers in ways that reduce nitrous oxide emissions.

“More than half of the emissions occur in winter,” he says. “We’re examining whether simply altering the timing of the application of fertilizers will reduces these emissions.”

Suburban residents also need to be aware of how adjacent ecosystems will be affected by climate change. Dr. Sherren’s understanding of resilient landscapes has led her to work with the Halifax Regional Municipality, assessing the future risk of forest fire where the suburbs meet wildlands.

“We’re making recommendations for their planning processes and resident education programs,” she says, based on the research of Master of Environmental Studies student Ellen Whitman.

Erosion isn’t the only climate change-related concern when it comes to our coasts and ocean. But the world’s oceans make for a challenging research environment. “We have a massive measurement problem because of [the ocean’s] area, depth and inhospitality,” explains Douglas Wallace, Dalhousie’s Canada Excellence Research Chair in Ocean Science and Technology.

Dr. Wallace is working with industry and government, developing and applying new technology to better observe the oceans. One project with researchers at Defence Research and Development Canada aims to convert unmanned surface vehicles used to seek mines into ocean-going environmental measurement vehicles. Fast and cheaper than manned research vehicles, they can be outfitted with sophisticated measurement equipment to collect data during experiments or accidents.

Working with commercial vessels that sail fixed routes year-round also has its advantages. Dr. Wallace is in discussions with companies that own and operate a vessel that supplies the Deep Panuke natural gas platform near Sable Island. Because of the regularity of the vessel’s trips, there is potential to gather data about that stretch of ocean, and the changes it undergoes over a long period of time.

Within a major project focussed on marine hazards, Dr. Wallace works closely with scientist counterparts in several government agencies, feeding data that will  shape policy. Their goal? “[To] gain a better awareness of how climate change will interact with the changes in the ocean, so we can better understand how to anticipate and prepare,” he says.

Scientific knowledge is essential to good climate policy, and when it comes to drafting that policy, it helps to have a lawyer with a science background.

Law professor Meinhard Doelle completed his chemistry degree at Dal in 1986. It was another decade before he sunk his teeth into climate change. In 1997, as then-executive director of Clean Nova Scotia, Prof. Doelle attended a meeting at Dalhousie about the state of global climate negotiations. The session convinced him to commit the organization to educating Nova Scotians about climate change. Since then, he has provided input on the province’s revolutionary Environmental Goals and Sustainable Prosperity Act (EGSPA), which committed Nova Scotia to significant investments in renewable energy. 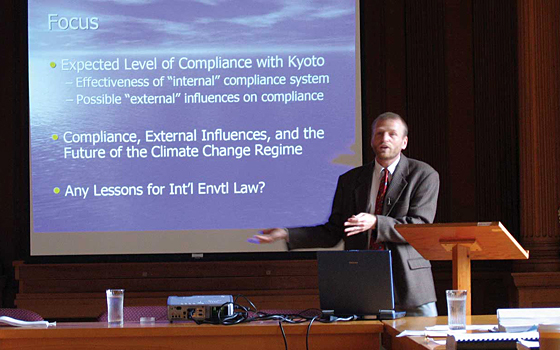 And Prof. Doelle’s influence extends beyond Canadian borders. He was an NGO member of the Canadian climate change delegation from 2000 to 2006 and still follows as an official observer. Beyond policy, his concern is compliance. His research on the subject led to the 2012 book Promoting Compliance in an Evolving Climate Regime, which he co-edited with Jutta Brunée and Lavanya Rajamani. He says that governments need to do better if international agreements are to work. “We seem to be going backwards on the design of compliance systems, because of the influence of countries like Japan, Russia and Canada.”

While international agreements are essential, Prof. Doelle, like Dr. Plug, Dr. Sherren and Dr. Burton, sees value in working with local governments and citizens. “If you have citizens in your community that you trust,” he says, “you are less likely to be swayed by outside interests who, out of short-term economic self-interest, may be trying to convince you not to take the necessary action.”

Not every town faces climate change impacts as intensely as Nome – or the outback communities of Australia. Dal researchers like Dr. Plug hope their efforts help keep it that way, giving policy-makers the tools they need to minimize catastrophe. “It’s part of the job of the scientific community to assist in making policy-makers scientifically literate,” he says.