Dal.ca Home
Home
News & Events
June 2013
13
The sands of time: What 30,000 years of sediment can teach us about the changing ocean

The sands of time: What 30,000 years of sediment can teach us about the changing ocean

The research team's multi-corer being raised out of the western tropical Pacific waters with a full load of samples. (Provided photo)

It’s surprising what a large cylinder of ocean floor sediment can tell you about the Earth’s global climate and ocean history. At face value, it may only seem like a big cylinder of mud, but to a paleo-oceanographer it provides a much bigger picture.

A team of international scientists known as the NICOPP (Nitrogen Cycle in the Ocean, Past and Present) working group, led by Dalhousie oceanographer Markus Kienast and Eric Galbraith of McGill University, use these cylinders to measure isotopes of nitrogen on the seafloor that arise from nitrogen-rich phytoplankton sinking and collecting in the mud.

“Over thousands of years, this slow accumulation builds up a vertical record of past changes that can be sampled by taking a sediment core using a specialized ship,” says Dr. Kienast. “As you go down in the core, you go back in time.”

In a new paper, published last week in Nature Geoscience, the NICOPP working group presented the first global synopsis of available sedimentary nitrogen isotope records from throughout the world’s oceans, spanning the past 30,000 years. 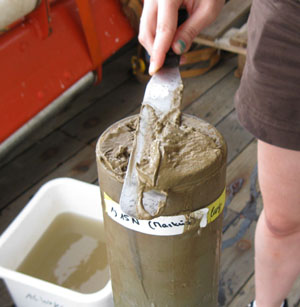 “The results confirm the ocean is an effective self-regulator with respect to nitrogen, a major nutrient,” says Dr. Kienast, “but reaching equilibrium after a disturbance such as the last glacial-interglacial warming can take hundreds or thousands of years.”

That’s a concern, given the scale and speed of current anthropogenic changes. In recent years, human activity, rather than natural causes, has become the main factor in oceanic change around the world. Global warming, along with the heavy use of nitrogen-based fertilizers for agriculture, is pushing the natural ocean nitrogen cycle off balance.

“Despite its importance for all marine life, we don’t really have a good handle on how the global ocean will react to these changes,” said Dr. Galbraith. “With too little nitrogen, the ecosystem would starve. Too much, and the decay of sinking phytoplankton would use up the oxygen dissolved in ocean water, suffocating fish and other marine animals.”

This highlights the importance of research on the interplay between climate change and ocean biogeochemistry.

Collaborating on a global scale

Previous studies on nitrogen isotopes in marine sediment records had shown signs of changes in denitrification at the end of the ice age, in some localized places. But the nitrogen isotope records are difficult to interpret from individual sites alone.

“Our research was driven by our need to provide quantitative constraints of climate change effects on the global ocean,” says Dr. Kienast.

After three years of research, the international team, composed of 35 ocean researchers, completed their goal of assembling a global network of sediment records to see the full picture clearly and compare the results with computer models of the ocean.

“This publication is not the end of it,” says Dr. Kienast. “We have a great group of enthusiastic scientists and we are looking to broaden our group and expand our research. Stay tuned.” 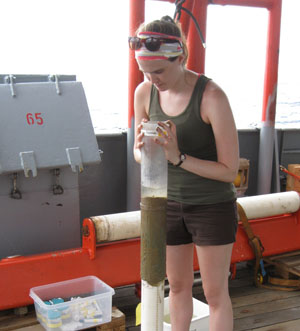 “If you like getting muddy, then you’ll love sediment work,” says Kerrigan. “Ultimately, this information from the sediment helps us reveal a little bit more about what’s happening in the ocean, both today and in the past”.

It is not a rare occasion for Dalhousie Oceanography graduate students to spend time at sea — it’s a key program requirement.

“A requirement that they are usually more than happy to fulfill,” says Dr. Kienast.