He was probably right. After all, when the Faculty of Management announced that its School of Business would be wearing a new name, what else could it have been than that of its greatest ambassador and champion, the man whose guidance, financial support and passionate commitment has helped shape the school it is today?

“From today forward, our school will proudly hold the title of the Kenneth C. Rowe School of Business,” Dr. Traves announced to thunderous applause from the crowd filling the atrium of the building that also bears the Rowe name.

“Today is really a new era of business at Dalhousie,” said Dean Peggy Cunningham. “We are binding the name of our business school to the name of someone who has been its most steadfast supporter. Ken is a person who truly embodies values-based management . . . I can think of no person more worthy of having their name on our business school.”

A legacy worth celebrating

The honour recognizes Mr. Rowe’s long connection with the School of Business. A devoted confidant, he has served on the school’s advisory for more than 20 years, 10 of them as its chair. He’s also been a member of Dalhousie’s Board of Governors and presently sits on the Dalhousie Advisory Council.

Some of his greatest support has been as a financial benefactor, and the millions he has given to the university over the years has made a huge difference in the lives of Dal’s students, supporting scholarships, academic initiatives, infrastructure and more. He was the lead donor on the capital campaign for the Rowe building and just last year, as part of the Bold Ambitions campaign, he made one of the largest donations in Dalhousie’s history: $15 million for the School of Business. 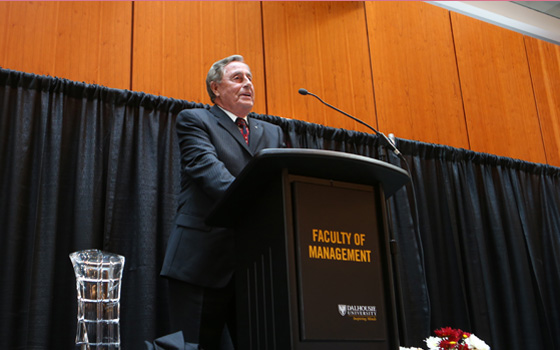 Speaking at the event, Mr. Rowe thanked Dr. Traves for his steadfast support of the School of Business, and saluted the school’s commitment to a modern, values-based business education. But he directed most of his remarks to the students in attendance.

“I hope it does inspire you in some way [to realize] that what I’ve achieved is exactly what you can achieve,” he said.

He also offered his advice to those pursuing an education and career in business.

“There are no shortcuts or substitutes for hard work, honesty and integrity in business,” he cautioned. “We’ve seen too many examples in recent years of alternative behaviour which led to the downfall of many successful careers and organizations. Try to have a passion for what you want to achieve, because it can last a lifetime: I still have the same passion today to grow my company, IMP Group, that I had when I started it in 1967.”

Pride in the present, promise for the future

The message resonated with the audience. Together with fellow business students Alexa Reedman and Colin Beiswanger, MBA student Christie Lang presented Mr. Rowe with a nautical memento — a signed buoy — as well as the first “Rowe School of Business” hoodie.

“To see someone of your prestige and calibre have the confidence in us, the students, to invest in us, is an honour,” said Lang, addressing Mr. Rowe. “Your support inspires us to not only strive for excellence, but also to give back to the community in whatever way we can.”

That commitment extends to the staff and faculty of the Rowe School of Business as well. Mr. Rowe’s $15 million donation last year is all about evolving Dal’s business programs to train and educate students with the skills and attitudes needed to succeed in the 21st century economy: global perspective, entrepreneurial spirit, integrity and confidence.

And in Ken Rowe, the school’s leaders say they have an ideal case example.

“We really couldn’t ask for a better role model for our students, or a more generous supporter,” said Greg Hebb, the school’s director. “I’ve always been extremely proud to work at Dalhousie, and I can say now that I can say now that I’m just as proud to lead the Rowe School of Business.” 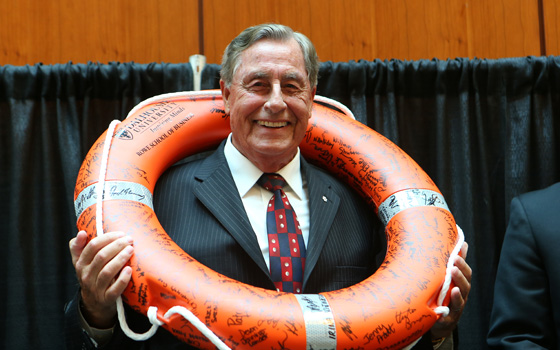