A history of great performances

Cape Breton band Slowcoaster gets the Grawood crowd into the groove at their show back in February. (Grawood photo)

Though its pronunciation has often been a point of debate, the Grawood, Dalhousie’s student pub on Studley campus, has been a staple of campus life for more than 40 years – and these days it’s hosting more live music than ever.

“For us, this is about building a vibrant arts and culture community at Dal, creating a Friday night tradition where Dal students can feel part of a welcoming and warm community,” says Jamie Arron, DSU vice-president student life, who notes that these activities are also wet/dry so that the entire student body can attend. “It’s made for a safe environment.”

This year’s entertainment roster represents another chapter in Grawood history, and shows just how far the campus pub has come since it first opened in 1972.

Tim Pertus started as a bartender when the Grawood opened and later became assistant manager and then manager, working in the lounge until 1987.  He remembers when drinks were served at 35 cents a piece or three for a dollar.

“It was just a banquet table set up with a bar behind and a few chairs,” says Mr. Pertus, recalling the first days of the Grawood.

He explains that the Grawood developed when the student union took over the campus’ liquor license. The main goal was “to make some sort of a social atmosphere on a nightly basis,” he says. 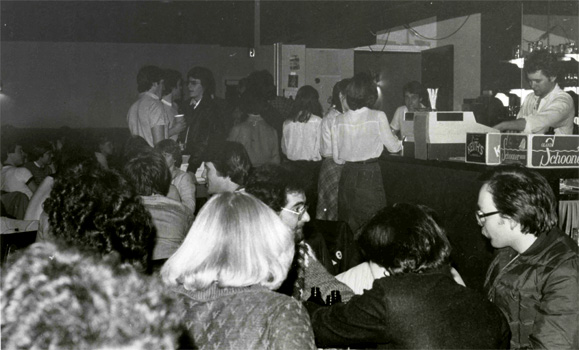 A photo of the Grawood lounge from the March 19, 1981 edition of the University News. Photo courtesy the University Archives and Special Collections.

As for the interesting name, it’s an amalgam of sorts, paying tribute to both John Graham and Clem Norwood. Mr. Graham was a Dal student union administrator who is credited with bringing the SUB into realization, and was general manager of the building. Mr. Norwood was the SUB’s director of operations.

The pronunciation has always been a bit unclear, a fact which the Grawood played up in a marketing campaign and video back in the fall. That confusion dates back to the pub’s earliest days — a 1978 promotional pamphlet actually used two different spellings, "Greywood" and "Grawood." However, consensus has stuck around the pronunciation “Grey-wood.”

Originally open at noon every day, the Grawood held talent nights and live musical acts throughout the ‘70s. Managed by Murdock Ryan, the Grawood was originally located on the third floor of the SUB, expanding to twice its initial size in 1977.

The expansion of the Grawood sparked some controversy. A Gazette article from Sept. 8, 1977, states that the Dalhousie student council’s survey indicated a majority support for increasing the lounge space to include the area that was, at the time, the Gazette offices and the adjoining hallway. This space became a multipurpose room that was to be used as extra lounge space and for “private luncheons and meetings for small university groups.”

Not everyone was happy about the expansion and Gazette articles indicated the paper’s displeasure with its loss of office space, as well as certain views that the renovations were a waste of money and encouraged the “passive entertainment” of drinking.  However, letters to the editor argued that the extra space would “pay for itself,” with the Grawood having previously brought in $400-$500 per week while having to turn away 30-100 people per evening.

Marty Williams, a Dalhousie alumnus who worked at the Grawood from 1974 to ‘76, says the student pub was always very busy because there were not as many bars downtown at the time.

Mr. Williams, who often drove a truck with beer deliveries, describes the Grawood bar staff as one big family: “sometimes a dysfunctional family, but a family just the same.”

The Grawood “is a service by the students for the students,” wrote Cathy Kerr and Gina Wilkins in the March 19, 1981, issue of University News. Their article reflects that, at the time, new liquor regulations on campus forbid the consumption of alcohol in residences and academic buildings.

The Grawood became a safe and appealing campus haunt, offering two televisions that showed “video movies at special times,” as well as “taped music” decided by the “bar-tender’s choice or by popular demand.”

Through subsequent moves to the SUB basement and, later, to its present location on the main floor, the Grawood’s focus on live music has ramped up. It remains student-run, employing about 30 students from across all Dalhousie campuses. Its capacity today is 450, up from 125-225 during its early days on the third floor. It doesn't make a profit, but it's understood, as Ms. Kerr and Ms. Wilkins put it more than 30 years ago, a service for students.

To that end, it remains a key space for student community, whether it’s weekly trivia nights, local homegrown talent (like the Dal’s Got Talent shows) or the latest Canadian buzz band making its way through town.