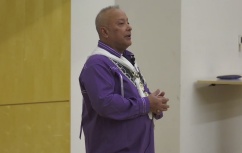 Watch our lecture series on Vimeo.


Welcome to the Winter 2022 ESS Lecture Series! We are excited to welcome many wonderful speakers and lecturers to the stage this semester.

Again this year, our lectures will be presented Thursdays evenings from 7:00-8:30 PM (Atlantic time).

As of Thursday 3 March, we are back in person -- in Potter Auditorium in the Rowe Building, 6100 University Avenue.

We will also be livestreaming on Zoom -- please write to sustlife@dal.ca for the Zoom link or students can check their Brightspace announcements.

Check out our past ESS lectures and Fall 2020/Winter 2021 Q&A events on the College’s Vimeo webpage.

Co-sponsored with DSUSO as part of Green Week 2022

Jason Rasevych is a Partner at Deloitte Canada within the Financial Advisory Practice and National Leader Indigenous Client Services. Jason is also leading the Indigenous Trust Services practice and a key member advancing Deloitte’s Reconciliation Action Plan (RAP). Jason is an Anishnawbe from Ginoogaming First Nation, a Treaty #9 signatory in Northwestern Ontario. Jason has over 20 years of marketing, finance, strategy, governance, economic development, and management experience with various First Nations across Canada.  He is recognized as one of Canada’s top economic developers and has secured more than $250 million for capital projects, legacy infrastructure, and business expansion with Indigenous groups. Jason has deep knowledge of First Nation rights and the natural resource sector through his involvement in complex negotiations between First Nations, industry, and governments.  This journey of promoting social license and consent of Indigenous peoples has led to precedent setting agreements in the mining, forestry and energy sectors resulting in Indigenous equity in projects and ownership of enabling infrastructure.  In 2019 he co-founded the Anishnawbe Business Professional Association to advocate for the inclusion of Indigenous business in pursuit of economic reconciliation in Northern Ontario.

Elizabeth Kolbert is a Pulitzer Prize-winning science writer and journalist, author of Under a White Sky: The Nature of the Future (2021) and The Sixth Extinction: An Unnatural History (2014). Elizabeth has been a staff writer for The New Yorker since 1999, writing dozens of pieces for the magazine, including political profiles (Senator Hillary Clinton, Mayor Michael Bloomberg, and Former Mayor Rudy Giuliani), a series on global warming (The Climate of Man) and many others. She was voted into the American Academy of Arts and Letters in March 2021.

Under a White Sky is a meticulously researched and deftly crafted work of journalism that explores some of the biggest challenges of our age. It also manages to be wickedly funny. Some passages read like an absurdist novel by KurtVonnegut or Joseph Heller. As in Cat’s Cradle or Catch-22, humanity is trapped within an ever more vicious circle created by its own skewed logic and techno-dependency. As the author writes early on, this is “a book about people trying to solve problems created by people trying to solve problems”.

Kolbert examines cutting-edge scientific advances: how much hope can we place in genemodification, geoengineering and assisted evolution? To what extent can we repair the mess we have made. Thanks to humans, the planet is heating dangerously fast, there is now more carbon dioxide in the atmosphere than at any time in millions of years, the extinction rate of other species is hundreds, maybe thousands, of times above natural levels, and just about every planetary warning gauge is heading further into the red. Are there mega-solutions out there for these mega-problems?

Thursday 27 January - Rule of Law in the High Seas? Hopes for Biodiversity Beyond National Jurisdiction

Professor Cymie Payne is a member of the Rutgers University faculty. She has appeared as counsel before the International Tribunal for the Law of the Sea, and as expert on environmental reparations before the International Court of Justice. She is Chair of the IUCN World Commission on Environmental Law – Ocean Law Specialist Group. She holds a MA from The Fletcher School of Law and Diplomacy and a JD from the University of California, Berkeley, and is a Fellow of the American College of Environmental Lawyers.

A discussion on the queer experience in the urban environment and the connection between queer liberation and environmental justice. Exploring many of the issues that queer folks face in urban areas (displacement, erasure from policy and protections, etc.) gives us a broader lens from which to understand environmental advocacy.

Diné and Pueblo people directly impacted by oil and gas extraction in the Greater Chaco region have been organizing for generations to protect the wellbeing of their communities, sacred sites, and the integrity of the landscape. But rarely is this story of extraction and land defense told from their perspectives. Our Story emerges from a long-standing collaboration between local Diné leaders in the Greater Chaco region, Pueblo organizers, and a small team of community-engaged media makers to share the story of the Indigenous-led fight to protect this sacred landscape.

Soni Grant is an anthropologist interested in political and legal anthropology, environmental studies, and science and technology. Their research focuses broadly on the politics of land, energy and extraction, and environmental justice, supported by the Social Sciences and Humanities Research Council of Canada and the Center for Engaged Scholarship. Soni earned a doctorate in Anthropology from the University of Chicago in 2021, where their dissertation was awarded the Sol Tax Dissertation Prize. They also hold a MA in Geography with a specialization in Gender Studies from the University of Toronto.

Samuel Sage (Diné) is the Community Services Coordinator for Counselor Chapter (Navajo Nation) and the Vice-President of the Board of Directors for Diné C.A.R.E.

David Tsosie (Diné) is a member of Diné Centered Research and Evaluation and the Diné Hataalii Association.  Dr. Tsosie was the Principal Investigator on the community-led study “A Cultural, Spiritual and Health Impact Assessment of Oil Drilling Operations in the Navajo Nation Area of Counselor, Torreon and Ojo Encino Chapters”, which combines a Health Impact Assessment methodology with a Diné-centered K’é Bee Hózhǫǫgo Iiná Silá analysis.

The last year emphasized just how vulnerable Canadian communities are to deadly heatwaves, wildfires, landslides and floods — in the midst of surviving through dangerous climate change-induced catastrophes, 2021 also brought mass civil unrest, the construction of blockades against natural resource extraction and the arrests of Indigenous land defenders and journalists by the RCMP. It's a lot. The team of environmental journalists at The Narwhal know how easy it can be to simply tune the bad news out. but also how powerful, meaningful and even beautiful storytelling can be key to social transformation, to democratic action and to challenging power. This session will explore The Narwhal's unique vision for environmental journalism in Canada, one that seeks to bring publics back into a meaningful engagement with news and in-depth reporting. Using the best tools of the trade, the sharpest insights of the industry and their readership relationship, The Narwhal rehumanizes stories about our natural world and draws readers back into some of the most urgent issues and conversations of our time.

Carol Linnitt is a journalist, editor, illustrator and co-founder of The Narwhal. Carol has been reporting on energy and environmental politics for the last decade for outlets including VICE Canada, The National Observer, Academic Matters and The Tyee. Carol began her career writing and performing interviews for The Canada Expedition, a non-governmental sustainability initiative, and while working in dispute resolution with communities affected by resource scarcity. Carol has a Master's in English Literature from York University where she studied political theory, natural resource conflicts and Aboriginal rights. She also has a Master's in Philosophy in the field of phenomenology and environmental ethics and has a PhD in English, and Cultural, Social and Political Thought (CSPT) from the University of Victoria.

Stephen Entwisle has an MA (Communications) from the University of Calgary and an MES (Climate Change Policy) from York University. He has worked extensively in greenhouse gas offsets, climate change and renewable energy policy, and supporting the commercialization of clean technologies. For several years, he worked with Indigenous communities in Western Canada and the US to identify, assess and develop small-scale renewable energy projects. Stephen is currently the Principal of TechTonic Communications. For much of the past three years, he has explored blockchain use cases for climate change solutions. He is very interested in the potential of innovative solutions, such as blockchain and other data technologies, to support the scaling carbon markets and facilitate the flow of finance to emerging clean technologies.

Thursday 10 March - Culture, Community, Connections, Climate and Citizenship: What Matters for the Wellbeing of Young People

Globally, there are growing concerns about the mental health and well-being of young people. Young people today are grappling with an unfolding climate crisis that will deeply impact their future, along with economic and employment uncertainties particularly in the wake of the pandemic. An important source of hope in this grim context are voices, particularly of young people, that are proposing new understandings of well-being that are inclusive of concerns with the larger environment and society. These understandings have implications for improving youth mental health and well-being. Importantly, they also open up exciting possibilities for innovation and action around larger issues such as environmental problems, cultural continuity (especially in Indigenous communities) and citizenship.

Dr. Srividya Iyer is an Associate Professor in the Department of Psychiatry and an Associate Member of the Department of Epidemiology, Biostatistics and Occupational Health at McGill University. Srividya’s work focuses on youth mental health and early intervention, especially for psychosis. Her research aims to ensure that more young people worldwide have timely access to appropriate, youth-friendly mental healthcare and enjoy well-being and social participation. Srividya partners closely with young people, families and communities to influence real-world practice and policy in Canada and globally. She leads ACCESS Open Minds, a pan-Canadian network of 250+ diverse stakeholders that is seeking to transform mental healthcare for urban, rural, Indigenous, post-secondary and homeless youths across Canada. She is Vice-President of the International Association for Youth Mental Health and an inducted member of the College of the Royal Society of Canada.

Co-hosted with Melanie Zurba, Dalhousie’s School for Resource and Environmental Studies and SSHRC

Much of our written accounts of L’nu history in Mi’kma’ki have been recorded through the lens of colonial European men. The characterization, role and heroism of L'nu women have been ghosted out of mainstream history. shalan joudry talks about the process of how she gives these forgotten and silenced women presence on the stage. Using her storytelling skills, shalan wrote and performed a one-woman theatrical piece – KOQM. Guided by the strength of an ancient tree (“koqm”), the women’s voices share with us their personal stories of grief, humour and resiliency that span 400 years of European colonization. KOQM was performed November 2021 at King's Theatre in Annapolis Royal, NS and is set to perform again this spring at Neptune Theatre in Halifax.

shalan joudry is a L'nu (Mi'kmaw) narrative artist, poet, playwright, podcast producer, oral storyteller and actor, as well as a cultural interpreter. shalan graduated with a Master of Environmental Studies from Dalhousie University and is now a PhD student in the Interdisciplinary PhD program at Dalhousie. For over two decades shalan has brought her Mi'kmaw stories to a new generation of listeners, sharing her poetry, oral storytelling and drum singing with numerous stages, events, schools and organizations.

Kelvin Fong is an assistant professor and the Elizabeth May Chair in Sustainability and Environmental Health in the Department of Earth and Environmental Sciences at Dalhousie University. He studies population health effects from environment conditions, including air pollution, green space, temperature extremes, and climate change. Through his research, Dr. Fong aims to contribute to environmental justice in levels of exposure to harmful exposures and their health effects. Outside of research, he holds leadership positions in the International Society for Environmental Epidemiology, organizing activities in education, capacity building, and career development.

As one of their final deliverables for the project, they are presenting a summary of their findings and hosting this panel discussion with a variety of experts with different perspectives on this important topic.