Dal.ca Home
Faculty of Management
Home
Centre for Executive and Graduate Education
News & Events
News
2019
June 2019
Grad profile: “How did it come to be that way? How could it be done differently?”

Grad profile: “How did it come to be that way? How could it be done differently?” 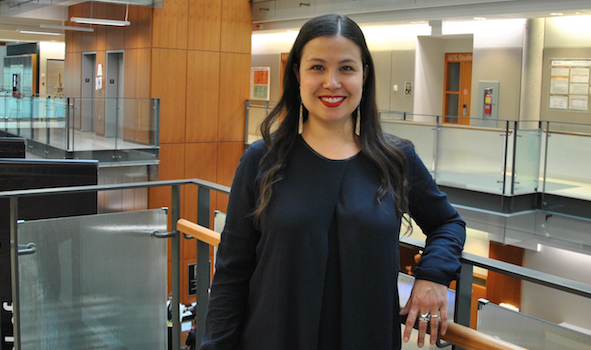 Kyla Kakfwi-Scott’s graduation this spring with a Master of Public Administration (Management) is just the latest in a long string of impressive accomplishments.

A member of the K’asho Got’ine First Nation in the Northwest Territories (NWT), Kyla is Senior Advisor in the Department of Health and Social Services for the Government of NWT. She was recruited six years ago as Senior Advisor to the Deputy Minister, and then Senior Advisor, Anti-Poverty. Today, she’s Project Lead for Primary Health Care Reform.

“It’s a beast,” says Kyla. “The population is over 50 per cent Indigenous, and in small communities it’s 80 to 95 percent, but that’s not often represented in our health and social service environments. There are great people, but many come from other places for short stints or on rotation. It’s hard for people to establish relationships with their care providers, and hard for the system to focus on local needs and priorities. Primary health care reform is about finding ways for us as a system to work differently—with ourselves, with the people we serve, with Indigenous governments in the territory.”

Kyla’s path to senior civil servant was an unusual one. Her home community is Fort Good Hope, NWT (Denendeh), where her father was born and raised, and her mother is from southwestern Ontario. She has lived for most of her life in Yellowknife, and continues to do so today.

She attended the University of Western Ontario for 18 months, but it wasn’t for her. “It was a bigger culture shock than I expected. I did not appreciate all of the ways that Indigenous and Northern culture and the actual place of being in the North was so foundational to me until I wasn’t in it anymore.”

Fast forward a few years, and Kyla is accepted into the Jane Glassco Northern Fellowship. “I was in the first cohort: 2010–2012,” she explains. “When I saw the ad for it I felt like they had designed it for me. It’s for early to mid-career Northerners who are working in the North, committed to Northern issues and need some development opportunities and networks to leverage their potential and advance in their careers.”

Each Fellow works on a policy issue and delivers a policy paper. “I looked at the Northern Studies Curriculum, a mandatory grade 10 course and the only high school course developed in NWT. I discovered there was no consistency and no formal curriculum—just a framework. I wanted to look at what was the intention, what was preventing it from being realized, and what could be changed. How do we make this a flagship learning opportunity that is valuable for students to take, for teachers to teach, and for parents to see as positive for their kids’ future?”

This policy work led directly to Kyla’s recruitment to the NWT government. Her work experience and personal history also played a role. “I grew up around leadership and Indigenous issues and politics and the Legislative Assembly so I have a good comfort level with the political dynamics in the NWT.” (Her father, Stephen Kakfwi, served as President of Dene Nation and was an MLA and cabinet minister from 1987 to 2003. In his final term in office, he was Premier. Her mother, Marie Wilson, was a journalist and manager with CBC North for years and served as a commissioner on the Truth and Reconciliation Commission.)

There was one catch: Kyla wanted to go back to school. As part of her employment contract, she would be able to pursue her degree after two years of service. Because she didn’t already have a degree, she had to go through a prior learning assessment and recognition (PLAR) process.

“I had wanted to go back to school for a long time. There are several programs across the country for distance/blended learning, but Dal had the best process for PLAR. It’s very clear and I got great support from staff in the faculty. It was nice way to start my relationship with the school.”

On top of her work and studies, Kyla is deeply involved in Dene Nahjo, an Indigenous innovation collective. “A group of us from all the different regions of the NWT came together out of Idle No More in 2012–13, and we’re very focused on anything active and positive to advance land, language and culture forever.” Their projects include an urban hide-tanning camp, Indigenous women’s programming and Indigenous leadership workshops.

“What’s great about the MPA degree is that it was really good to have the theoretical and academic support behind things I was already doing in my work,” says Kyla. “What is the history? What is the reason? How did it come to be that way? How could it be done differently? It was good to be forced to think about those things. It’s hard to carve out time in your daily life to do that kind of thinking and it's too easy when you're working within a system to fall into doing things the way they've always been done without questioning why.”

Kyla also appreciated the effect of her academic pursuits on her family. “Because I was working and then doing school in my personal time, my family saw the work of school happening. I have two daughters—one in grade 10 and one in grade five. This has been part of their lives for more than three years. There’s been lots of support and understanding from them. Because we don’t have a university here in the NWT, the rhythm of student life is not known in the same way. Being able to bring that into my family and have them observe and understand that balance I hope will help them think about what their own educational journeys will be.”