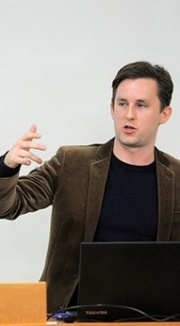 Born and raised in Halifax, NS, I attended Bishop’s University in the Eastern Townships of Quebec where I received an Honours BA in Political Studies. Following stints in Victoria BC, and Ottawa, Ont, I returned home to Halifax where I completed an MA in Political Science at Dalhousie University. Then it was off to Paris, France, as part of the Canada-France Youth Exchange Agreement, before being cajoled back to Dalhousie to work with my MA supervisor, Professor Frank Harvey, on a PhD. As the token Haligonian in the Department, I’m routinely called upon for guidance as to local entertainment, activity, and general divertissement – a task at which I routinely, and spectacularly, underwhelm.

My research interests include international relations theory, Canadian foreign policy, US foreign policy, international rivalry, coercive diplomacy, and the politics of violence. More broadly, I’m interested in the collision of political groups/units over time and across history. Whether city states in Ancient Greece or nation states in the modern era, peoples have organized themselves for the purposes of doing violence and contesting the boundaries of power, a phenomenon sitting at the core of that which constitutes ‘the political’ and an understanding of which remains vitally important for students of history and contemporary politics alike.