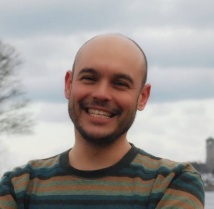 Ramón Filgueira grew up in Galicia, Spain, where seafood has dominated the economy, culture and diet of the Galician people for centuries. He completed his undergraduate degree in Marine Sciences at the University of Vigo in Spain. He then went on to complete a Master diploma in Environmental Management and Sustainable Development at the University of Valencia. Ramón obtained his PhD in Marine Sciences from University of Vigo on the ecophysiology of mussels. In 2008, he came to Canada for a postdoctoral fellowship in ecosystem modelling at Dalhousie University. In 2012, Ramón began a postdoctoral fellowship at the Gulf Fisheries Centre, Fisheries and Oceans Canada. There he developed ecosystem models of aquaculture sites that could be used for marine management decision-making. Ramón joined the Marine Affairs Program at Dalhousie University in March 2016.

The Prix d'Excellence is Fisheries and Oceans Canada’s most prestigious award
honouring individuals and teams who have made exemplary contributions to the department. I received this award in 2015 as a member of the “Aquaculture Carrying Capacity Team” (Gulf Fisheries Centre) in the category of “Excellence in Policy and / or Science”. This award is a recognition of our ecosystem modelling work in Atlantic Canada and its application to assessing and improving the sustainability of shellfish aquaculture sites.

Ramón’s research goal is to promote the sustainable management of coastal aquaculture sites and to define ecological indicators to monitor ecosystem health. His primary research tool is ecosystem modelling which is applied to ecosystem-based management. The models are used to study key aquaculture-environment interactions, explore ecosystem functioning, and establish precautionary monitoring thresholds. Ramón uses modeling tools such as scenario building and optimization to generate alternative and objective management strategies that can be used to inform marine spatial planning (MSP). MSP is a process in which ecological, social and economic aspects converge with the ultimate goal of improving coastal management according to an ecosystem approach.