Find a community of like-minded women who know technology is a great platform for making a difference.

Dalhousie's Faculty of Computer Science welcomed 144 per cent more first-year female students into its undergraduate programs last fall than it did in 2016, the result of a two-year initiative designed to help close the gender gap in the classroom and the tech industry more broadly.

Recognition for the success of the Faculty's WeAreAllCS initiative has come fast and furious this year, with the latest honour coming at the Dalhousie Legacy Awards Wednesday when the working group of staff, faculty and students spearheading the initiative took home the President's Award for the Advancement of Equity, Diversity and Inclusiveness (EDI).

“We feel honoured to receive recognition for the hard work made by our team in the Faculty of Computer Science with our WeAreAllCS initiative," said Andrew Rau-Chaplin, the Faculty's dean. "Making such a substantive change did not happen overnight."

Over the past two years, Dr. Rau-Chaplin’s team worked together to develop new curriculum and course delivery methods, create new scholarship opportunities and peer mentorship programs, and to host a national conference for women in technology. Dr. Rau-Chaplin says the initiative addressed a complex challenge that required careful coordination alongside partners in industry and Nova Scotia’s K-12 system.

While the initiative has been noted for its impact in attracting more female students to the Faculty, it's also being celebrated for its emphasis on retaining and supporting them after they arrive. For instance, the Faculty collaborated with the Women in Technology Society to initiate the Female-identifying Student Peer Mentorship Program that pairs incoming students with upper-year mentors — a program that has been met with much success. And the Faculty's curriculum was reimagined in certain ways to ensure female students felt a greater sense of belonging and opportunity in the field.

"There has been a significant change in the culture here in the Faculty of Computer Science due to this initiative," wrote one nominator for the EDI award. "[It] has rejuvenated the faculty and ensured that an underrepresented group in the technology field feels empowered and supported here."

A broader platform for change

The accolades for the ongoing initiative began earlier this year on the national stage when Dr. Rau-Chaplin was honoured with the Diversity Champion Award from the Women in Communications and Technology (WCT) group, a national association committed to advancing women in Canadian information, communications, media and technology.

“Winning an award like this gives our WeAreAllCS initiative a national platform to not only show our support for women in technology but to also inspire other institutions and industries to prioritize the attraction of female talent in the tech sector,” says Dr. Rau-Chaplin, pictured below receiving the award. 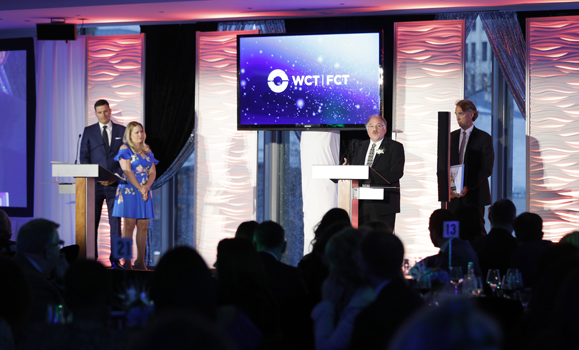 “Every year, WCT recognizes the rising stars who inspire others to unite to close the gender gap. This award was created specifically to recognize the contributions of men in advancing women’s engagement and leadership in the digital economy,” says Joanne Stanley, WCT’s executive director.

And then in early June, the Faculty won Diversity Champion of the Year at the Digital Nova Scotia Awards for its work on the initiative.

The recognition comes at a time of growing sentiment that if the designers, developers and influencers behind technology are not diverse, technology cannot reflect or properly serve society.

Like most universities in North America, however, Dalhousie’s Faculty of Computer Science has had a gender gap with women representing less than 20 per cent of its student population. This statistic has been even lower at the undergraduate level.

In 2016, with Dalhousie’s 200th celebration in mind, the Faculty of Computer Science thought that if they could double the number of women entering an undergraduate computer science program in September 2018, and then retain those women through a four-year degree and into industry, they could begin to play their part in fixing the gender imbalance in the technology industry.

“We are an important part of a pipeline that starts in K-12, through university, and into industry,” says Dr. Rau-Chaplin. “If we are going to serve the sector and society, we need to create economic opportunities and role models for women in technology to not only attract but retain female leaders.”

Recognizing the shared challenges facing industry and the university, the Faculty created a number of partnerships with industry supporters, coming together to offer thirty-two Women in Technology Scholarships. In addition to financial support, the awards provide mentoring opportunities with female tech leaders and enriched co-op opportunities.

Application and enrolment numbers into all programs within the Faculty are on the rise, and the Faculty plans to continue working to ensure that all students are met with a quality education and benefit from a diverse and inclusive classroom experience.

“It is fantastic to see twice as many female students join our programs, but this is just the start of a long journey to get to where we need to be with gender balance in our classrooms and industry,” says Dr. Rau-Chaplin. “This is an ongoing effort and we’ll continue to work with our partners to work towards a lasting change.”