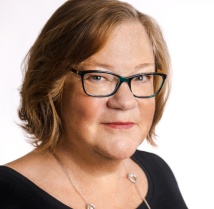 Susan Stackhouse is a specialist voice, speech and dialect coach, and an actor. She received her training at Dalhousie University, the National Theatre School of Canada, and the Royal Central School of Speech and Drama in London, England, as a recipient of the prestigious Chevening Scholarship.  Susan began her career as an educator at George Brown College, in the Performing Arts Department and then moved to her home province of Nova Scotia where she now holds the position of Professor (Acting Program) in the Fountain School of Performing Arts at Dalhousie University.

Susan continues to act and voice coach in a professional capacity.  Her research has included collecting Canadian dialects as an Associate Editor for the world's first online dialect and accent repository, The International Dialects of English Archive, and she has directed productions for DalTheatre (The House of Bernarda Alba, 7 Stories, Our Town, and Pride and Prejudice).  She is the recipient of the 1999-2000 Faculty of Arts and Social Sciences Award for Teaching Excellence at Dalhousie.

Susan spent sixteen seasons with the Shaw Festival (the second largest repertory company in North America) as a member of the acting ensemble and as a voice coach.  Some highlights of her time with this company include appearing in Pointe Valaine, An Inspector Calls, Peer Gynt, Marathon ’33, The Voysey Inheritance, Cavalcade (2 seasons), The Vortex (2 seasons), Simpleton of the Unexpected Isles, and The Women.  She has also appeared at Theatre New Brunswick (The Road to Mecca, The Corn Is Green, and Life With Father), Persephone Theatre (The Real Thing, and Matty and Rose), and the Blythe Festival (The Eyes of Heaven, and World Without Shadows).  Susan has voice coached many professional theatre productions (including Strong Poison, The Seafarer, and Romeo and Juliet for the Royal Manitoba Theatre Centre, and Old Stock: A Refugee Love Story for 2b theatre) and feature films (including Relative Happiness, Copperhead, The Memory Keeper's Daughter, The River King, and Pyromaniac's Love Story). From 2014 through 2018 she was on the faculty of the Citadel/Banff Centre Professional Theatre Program.

Most recently Susan appeared as Nurse in Shakespeare in Love at Neptune Theatre, where she also played the role of Nurse in Romeo and Juliet, Nat in the Pulitzer Prize-winning play Rabbit Hole, and Nana in For the Pleasure of Seeing Her Again.  She has performed with Jeremy Webb/Off The Leash Creative in Under Milk Wood, DMV Theatre (White Rabbit, Red Rabbit), Ship’s Company Theatre (The Parrsboro Boxing Club), and at Festival Antigonish Summer Theatre (Blithe Spirit, and For The Pleasure of Seeing Her Again).  Susan was also featured as Anna Dobchuk in several episodes of the award-winning CBC radio series Backbencher, written by Wendy Lill.

Susan is a huge supporter of the Nova Scotia Talent Trust, a not-for-profit registered charity that helps ensure the future of Nova Scotia's vibrant cultural life by providing scholarships to Nova Scotians who demonstrate exceptional potential and commitment to becoming established artists in their chosen fields.