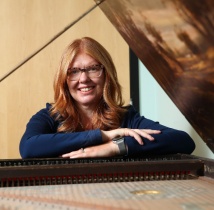 Estelle Joubert received her DPhil from Oxford as a Clarendon scholar in 2007, was a SSHRC postdoctoral research fellow at the University of Toronto from 2007-2009 and joined Dalhousie in 2009.  Her research interests include opera and Enlightenment political thought; opera’s engagements with the history of sensation and neurophysiology; music in the global seventeenth and eighteenth centuries; and computational musicology, especially graph databases.  Her forthcoming book, German Opera and the Politics of Sensation, 1750-1815, traces opera’s engagements with political debates such as human equality, civil freedom, the abolition of torture and modern systems of justice from the Enlightenment to the Napoleonic era.  She was principal investigator for a large-scale team-run project entitled Opera and the Musical Canon, 1750-1815 funded by a SSHRC Insight Grant, which includes a computational component entitled ‘Visualizing Operatic Fame’.  Together with David R. M. Irving, she is co-editing the Enlightenment volume of a forthcoming six-volume Cultural History of Music (Bloomsbury Press, 2021). Her teaching has been recognized by the Teaching Award of the American Musicological Society, the British Society for Eighteenth-Century Studies Teaching Prize, the Innovative Course Design Prize of the American Society for Eighteenth-Century Studies, and an innovation grant from the Provost’s office at Dalhousie.

Joubert is currently a Provost Fellow at Dalhousie University, with a portfolio on improving the graduate experience and increasing PhD enrolment.  Her prior leadership experience includes serving as Associate Director, Graduate Studies and Research at the Fountain School of Performing Arts (2014-2015; 2016-2018), and Graduate Coordinator (2011-2014).  She has served as assessor for various research granting agencies, including SSHRC, FRQ (Fonds de recherche du Québec), DAAD (German Academic Exchange Service), and FWF (Austrian Science Fund)

Joubert held a Balzan International Research Visitorship at the Faculty of Music, University of Oxford (Trinity term 2014) and was a Visiting Research Scholar at the Department of Music, UC Berkeley for 2015-2016.  In 2017 she was elected DAAD Research Ambassador for Dalhousie and she currently serves on the Board of Directors for the Mozart Society of America.