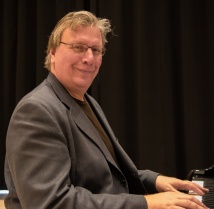 Currently active in numerous endevours and musical groups Chris Mitchell is an engaging and innovative saxophonist. Heralded as one of Canada’s finest instrumentalists, Chris has contributed to the music scene in a number of diverse and exciting ways. A versatile player, Chris is a sought after talent across a variety of genres performing with a myriad of artist’s including David Foster, Natalie Cole, Lionel Richie, Ray Charles, Rosemary Clooney, Phil Woods, Kenny Wheeler, Jackie Richardson and Doug Riley to name a few. Chris recently toured with The Afro Cuban Jazz and Beyond Quintet featuring Ignacio Berroa, Hilario Duran, Roberto Occhipinti and Jorge Luis Torres. Chris has also toured extensively in North America, Europe and in Asia and has also performed with a numerous symphony orchestras across Canada and in Europe. His extensive experience as a performer, composer and arranger has culminated in the production of four solo instrumental albums to date. As a result of his 1997 release “ The Witches of Red eard ” featuring the late jazz icon Phil Woods. The Chris Mitchell Quintet was the recipient of the prestigious “Prix De Jazz DuMaurier” performing at the 1999 Montreal Jazz Festival. As a sideman Chris has also recorded with numerous Juno and ECMA winning artists. Chris’ talents include a keen ability to understand product advertising and promotion. He runs his own successful production company – MitchMusic. In addition Chris’ understanding of multi-­‐ media presentation has resulted in compelling commercial music and marketing materials for a number of clients including both the public and private sectors.

Chris Mitchell has established himself as a well-respected “first call” studio and live performance musician. Chris has worked on numerous television, radio and jingle productions including countless live shows in a variety of venues. Chris's well-rounded and diverse style enables him to be proficient in a number of musical genres. Chris is featured on a number of compact discs for other established Canadian artists who include Canadian music icon Doug Riley.