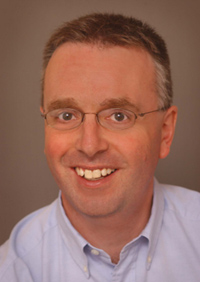 Six years ago, Dr. Andrew Peregrine, an England-born Ph.D. and veterinarian teaching at the Ontario Veterinary College, was quite surprised to discover that parasite egg output was often lower on organic than conventional sheep farms. So, his inquiring mind delved deeper.

"We thought it was important to first study how these parasites behave in sheep raised in Canada - as they had never been fully studied previously. We were unsure of which parasites were most important and how burdened sheep and lambs were with these parasites."

In Canada, a growing market for lamb and sheep's milk, buoyed in part by growing immigrant communities, has resulted in an industry that is striving to keep pace with the demand. To meet this demand, organic producers need effective management tools for dealing with one of their largest production barriers: infection with gastrointestinal parasites that slow growth and affect sheep condition.

Organic farmers strive to maintain low infection levels in their herds without the use of chemical dewormers. The goal is to manage parasite burdens to minimize levels of parasites both in the animals and on the pasture. Yet, should the health or welfare of an animal be in jeopardy, organic producers are permitted to treat individuals with diagnosed parasitic infections under very strict guidelines. The whole flock cannot be treated as a preventive measure, and any treatments must be well documented.

"Most organic farmers have learned how to manage parasites without the use of drugs. It does not mean that they never run into problems, but, on the average, they have adopted control strategies that have a highly significant impact on parasite burden," says Peregrine.

Moreover, they avoid the development of drug resistance, one of the more critical issues in conventional sheep farming. In fact, management strategies employed by organic farmers are now being implemented on non-organic farms faced with resistance to dewormers.

"Parasites are on every single farm," comments Peregrine, "But between farms, there is a great variation on the burden of parasites and that is largely driven by management practices adopted on these farms".

Organic farms typcially have low stocking densities, a factor that contributes to their low parasite burden. But, in order to maintain a low level of egg output throughout the grazing season, regular monitoring of sheep condition and parasite egg output is essential.

From an initial study undertaken 6 years ago, Peregrine and colleagues noted a significant increase in parasite egg output in Canadian sheep flocks in the spring. This corresponds to when ewes are birthing lambs, and is also known as the periparturient egg rise, and leads to the contamination of the lambs' pasture with high levels of parasites and to a decline in the condition of the ewes. Yet, many shepherds practice accelerated lambing, or three birthings over a two year period. Peregrine wondered: Is there still a correspondence between lambing and parasite burdens when occurring in the fall or winter, instead of in the spring?

To get a better understanding of the parasite life cycle and infectivity, Peregrine and his team embarked on a research project as a part of the Organic Science Cluster. The project consists of year-round observations of egg output on farms that practice accelerated lambing in the absence of deworming and an examination of the overwintering capacity of parasites on pasture.

Overall, their results tell a story of egg count increases in all three lambing seasons, with levels highest at gestation and lactation, and with seasonal variations in the magnitude of infection. Egg counts were found to be fairly low in the winter and spring seasons, with an increase observed during the gestation period, particularly after lambing and during lactation. In the autumn, ewes are highly infected from a summer spent grazing pastures and so shed many eggs, resulting in egg counts that peak in late gestation, then drop after lactation as cold temperatures slow the maturation of eggs to infective parasites on pasture.

Peregrine notes that it is normal to observe higher pathogenicity when there is a springtime rise in egg counts, but, even though egg shedding is less pronounced and animals are indoors during the fall or winter, the parasites may still have a substantial impact on health in other seasons.

In another aspect of the study, Dr. Laura Falzon examined the overwintering on pasture of one known noxious, blood-feeding parasite, Haemonchus contortus. The good news: this parasite does not survive well in the current winter conditions in Canada, resulting in low burdens of this parasite when sheep begin grazing their spring pastures. The possible impacts of a changing climate remain unknown, but Peregrine comments, "Life for organic farmers will certainly become more problematic if Haemonchus survives the winter. So, continuing to monitor how those parasites survive will be extremely important, particularly for the organic industry." Hot and humid summers may also help to build large populations of parasites very quickly.

Peregrine hopes to reinstitute his study again in another five years, looking for an impact of climate change on parasite survival. In the meantime, he pursues other studies and spends his free time playing squash and hockey, a skater since he immigrated to Canada some fifteen years ago. Faithful to her interest in sheep, Falzon enjoys relaxing with a ball of yarn as she knits sweaters. Together, they are part of an interdisciplinary team that is very efficient at resolving complex epidemiological issues.

This article was written by Nicole Boudreau, Organic Federation of Canada, on behalf of the OACC with funding provided by Canada’s Organic Science Cluster (a part of the Canadian Agri-Science Clusters Initiative of Agriculture and Agri-Food Canada's Growing Forward Policy Framework).  The Organic Science Cluster is a collaborative effort led jointly by the OACC, the Organic Federation of Canada and industry partners. For more information: oacc@dal.ca or 902-893-7256.