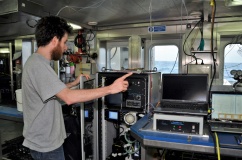 PhD student Ricardo Arruda Monteiro da Silva collected 5-weeks worth of data from two transects across the North Atlantic Ocean in April/May of 2017 onboard this Irish research vessel.

Research Cruises that have installed the Dal-VOS underway system

From April 17th to May 23rd the VOS system collected 5 weeks of data from two crossings of the North Atlantic, from Galway, Ireland to St. John's, NFLD and back.

Onboard there were three underway systems running simultaneously; one was the General Oceanics system on the Celtic Explorer run by the Irish Marine Institute and two (OceanPack2 and Dal-VOS) installed for this survey by Dalhousie University (Nova Scotia, Canada).

Aside from quantifying the CO2 fluxes at the moment, the main goal here was to compare and validate these systems for future applications on commercial Volunteer Observing Ships (VOS), other research vessels and platforms (such as gliders), to further increase our data coverage of the surface ocean and hopefully improve our yearly estimates (and variability) of the uptake of CO2 by the oceans.