Globe Editor. (7 Sept 2011). Drug trials should not be information inhibitors. The Globe and Mail.

In November 2012, Françoise Baylis presented to the Senate Committee, this time highlighting the need to ensure t 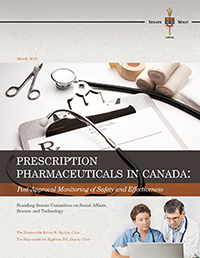 The committee tabled its second report in March 2013, Prescription Pharmaceuticals in Canada: Post-Approval Monitoring of Safety and Effectiveness [PDF - 4.4 MB].

Françoise Baylis' contribution on the need for post-appproval strategies for population sub-groups is referenced in the Comittee's second report (page 23).

Herder, M. (2 May 2016). House of Commons' Standing Committee on Health: Development of a National Pharmacare program.

Lack of transparency around pharmaceutical drugs continues to undermine patient safety and public health. The problem stems from the fact that lots of evidence about a drug’s safety and effectiveness is never published and remains inaccessible. While Canada seemed to be on a path to breaking norms of relevant secrecy with the passage of Vaessa's Law, in March 2016 Health Canada published its Draft Guidance about how it intends to interpret sections 21.1(3)(c), cementing an approach that has already stymied access to information regarding the safety and effectiveness of pharmaceuticals. The following letters from legal scholars, clinicians and researchers, and representatives of civil society are in response to Health Canada’s call for public commentary on its Draft Guidance. The letters call upon Health Canada to remove limitations on access to relevant information so as to exclude clinical data (relevant to drug safety and effectiveness) from the category of confidential business information.

Since 2012 Matthew Herder has published several papers, appeared before Parliamentary Committees on several occasions, and written a number of blogs and op-eds relating to pharmaceutical policy. These works focus on a range of topics, from improving the transparency of evidence behind pharmaceutical interventions as well as regulatory decision-making to orphan drug policy and investigations of national pharmacare.

In December 2013, the Government of Canada introduced Protecting Canadians from Unsafe Drugs Act (Vanessa's Law) Amendments to the Food and Drugs Act (Bill C-17). It was designed to improve Health Canada's ablity to collect post-market safety information and take action when a serious risk is identified. In June 2014, Herder presented to the Standing Committee on Health [PDF - 311 KB] calling for further amendments to make evidence and regulatory work transparent, and to make it absolutely clear that transparency trumps commercial claims. Vanessa's Law was subsequently amended to include a number of transparency related provisions, and then passed by Parliament in November 2014.

Herder has worked since the passage of Vanessa's Law to ensure that the legal changes are appropriately implemented by Health Canada. In December 2015, he published an article on reinstitutionalizing transparency at Health Canada and generated a template letter, calling on clinicians, researchers and others, to file requests with Health Canada for access to unpublished information about pharmaceutical drugs. This letter writing campaign was supported by a number of NGOs, including AllTrials, SenseAboutScienceUSA, Evidence4Democracy, and Canadian Doctors For Medicare.

In addition to these transparency related projects, Herder has written several papers relating to orphan drugs – therapies aimed at treating rare diseases. As a result of his work in this area, in May 2016 he was invited to appear before the House of Commons' Standing Committee on Health in connection with its study about national pharmacare.