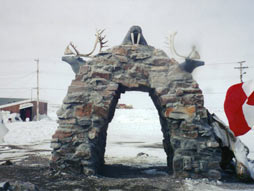 Naujaat, formerly Repulse Bay, is at the north end of Roes Welcome Sound which separates Southampton Island from the mainland. On the east side, Bay Frozen Strait leads east to Foxe Channel.

The hamlet is located exactly on the Arctic Circle. Transport to the community is provided primarily by air and by an annual sealift. Naujaat is home to a wide variety of animals including polar bears, caribou, seals, whales and walrus. There are also approximately one hundred species of birds in the area, including gyrfalcons and peregrine falcons.

Naujaat is translated into English variously as “seagull fledgling,” “seagull resting place” or “seagulls’ nesting place,” named after a cliff five kilometres to the north, where seagulls, migrating from the south each June, make their nests. Naujaat was first visited by Europeans in the 1740s, and by the late 1800s it became a popular whaling ground for American and Scottish whalers. Many Naujaat Inuit residents worked on board these whaling vessels from the south. Although there are various theories as to the origin of the English name “Repulse Bay,” many attribute the name to Christopher Middleton, who when searching for the Northwest Passage in 1742 discovered that the bay was not a route out of Hudson Bay, but rather a cul-de-sac. He is claimed to have called it the “Bay of Repulse", the bay where I was pushed away”. Others believe that the name comes from an eighteenth-century English vessel named "Repulse" which visited the area. The Hudson's Bay Company opened a post in Repulse Bay about 1916 and in 1923 a rival fur trading company, Revillon Freres, opened a post. A  Roman Catholic Mission was built in 1932. Naujaat was formerly part of the District of Keewatin and the Keewatin Region; in 1999 the area became part of the Kivalliq Region.

Today’s population is 999, 95% Inuit.  The Naujaat community continues to rely on traditional sealing, fishing, hunting, trapping, and carving for their livelihood, together with tourism. Naujaat is known for its Inuit artists, especially carvers (typically creating small realist animal sculptures of ivory, soapstone, marble and antler), as well as jewellery and crafts. Its people are the 'Aivilingmiut'.

The Community Liaison Coordinator for Naujaat is Jade Owen.